Robert Mueller’s soon-to-be-delivered report will begin months of congressional investigations, subpoenas, court challenges, partisan slugfests, media revelations, and more desperate conspiracy claims by Donald Trump, all against the backdrop of the burning questions: Will he be impeached by the House? Will he be convicted by the Senate? Will he pull a Richard Nixon and resign? 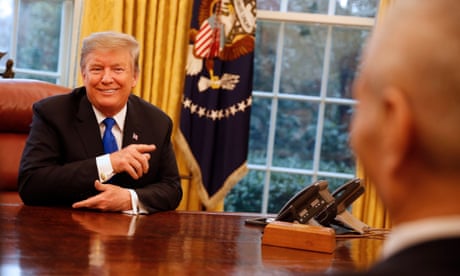 Trump faces a legal reckoning – but are his worst troubles yet to come?

In other words, will America fire Trump?

I have news for you. America has already fired him.

When the public fires a president before election day, as it did Jimmy Carter, Nixon and Herbert Hoover, they don’t send him a letter telling him he’s fired.

They just make him irrelevant. Politics happens around him, despite him. He’s not literally gone but he might as well be.

It’s happened to Trump. The courts and House Democrats are moving against him. Senate Republicans are quietly subverting him. Even Mitch McConnell told him to end the shutdown.

The Fed is running economic policy. Top-level civil servants are managing day-to-day work of the agencies.

Isolated in the White House, distrustful of aides, at odds with intelligence agencies, distant from his cabinet heads, Trump has no system to make or implement decisions.

His tweets don’t create headlines as before. His rallies are ignored. His lies have become old hat.

Action and excitement have shifted elsewhere, to Democratic challengers, even to a 29-year-old freshman congresswoman too young to run.

Don’t get me wrong. He’s still dangerous, like an old landmine buried in the mud. He could start a nuclear war.

Yet even America’s adversaries just humor him. Kim Jong-un and Xi Jinping give him tidbits to share with the American public, then do whatever they want.

Why did America fire him? If the nation were to write him a letter informing him he’s no longer president, it would go like this:

While many of us disagree on ideology and values, we agree on practical things like obeying the constitution and not letting big corporations and the wealthy run everything.

Your 35-day government shutdown was a senseless abuse of power. So too your “national emergency” to build your wall with money Congress refused to appropriate.

When you passed your tax bill you promised our paychecks would rise by an average of $4,000 but we never got the raise. Our employers used the tax savings to buy back their shares of stock and give themselves raises instead.

Then you fooled us into thinking we were getting a cut by lowering the amounts withheld from our 2018 paychecks. We know that now because we’re getting smaller tax refunds.

At the same time, many big corporations aren’t paying a dime in taxes. Worse yet, they’re getting refunds.

They aren’t breaking any tax laws or regulations. That’s because they made the tax laws and regulations. You gave them a free hand.

You’re supposed to be working for us, not for giant corporations. But they’re doing better than ever, as are their top executives and biggest investors. Yet nothing has trickled down. We’re getting shafted.

Which is why more than 75% of us (including 45% who call ourselves Republicans) support Alexandria Ocasio-Cortez’s proposed 70% tax on dollars earned in excess of $10m a year.

And over 60% of us support Elizabeth Warren’s proposed 2% annual tax on households with a new worth of $50m or more.

You’ve also shown you don’t have a clue about healthcare. You promised us something better than the Affordable Care Act but all you’ve done is whittle it back.

A big reason we gave Democrats control of the House last November was your threat to eliminate protection for people with pre-existing conditions.

Are you even aware that 70% of us now favor Medicare for all?

We’ll give you official notice you’re fired on 3 November 2020, if not before. Until then, you can keep the house and perks, but you’re toast.