BENGHAZI, Libya (Reuters) – Eastern Libyan forces said on Friday they had killed a senior al Qaeda figure in southern Libya, during an operation to secure oil and gas assets and fight militants in the lawless south.

The Libyan National Army (LNA) faction said it killed Abu Talha al-Libi, a commander in Al Qaeda in the Islamic Maghreb (AQIM), and two other militants near the city of Sabha, LNA spokesman Ahmed Mismari said.

He named the others as Abdullah al-Desouki, an Egyptian, and al-Mahdi Dangou, a Libyan also known as Abu Barakat, who a Libyan official had previously said had links with Islamic State.

Al Qaeda and Islamic State have been using southern Libya as a base for attacks in Libya and neighbouring countries, exploiting a security vacuum created by the fall of dictator Muammar Gaddafi in a 2011 rebellion backed by NATO air strikes.

Islamic State stepped up attacks in Libya, including the capital Tripoli, in recent months after regrouping in the south having lost its main base in the coastal city of Sirte in late 2016.

The LNA sent troops to Sabha this week, triggering speculation they might be headed for the El Sharara oilfield, some 250 km (150 miles) away.

The LNA is led by Khalifa Haftar, a major player in Libya since his forces seized Benghazi in 2017, after a three-year battle mainly with Islamist fighters. Benghazi became the base of a rival government to the one in Libya.

The 315,000-barrels a day El Sharara oilfield has been closed since December due to a protest by tribesmen and state guards demanding salary payments and development in the area. 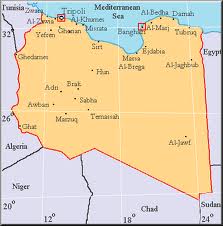