The Israeli military has finally confirmed long-running reports of its collaboration with militant groups operating against the Syrian government, admitting that it has provided weapons to them.

In an interview with the British daily The Sunday Times, Lieutenant General Gadi Eizenkot, the army’s outgoing chief of staff, said the Israeli regime had supplied “light” weapons to anti-Damascus militant groups operating in Syria’s Golan Heights for “self-defense.”
This is the first time the Tel Aviv regime acknowledges arms supplies to militants fighting in Syria, after numerous reports emerged of the discovery of Israeli-made weapons and military equipment during clean-up operations by the Syrian army.

In September, Israel’s Jerusalem Post removed an “explosive report,” which revealed the Israeli military had supplied weapons and ammunition to the militants in Syria’s Golan Heights. The paper later told Russia’s RT that the report had been taken down at the request of the Israeli army’s “military censor.”

Citing interviews with several militant figures, the report said that Israeli officials had given $75 per-person monthly allowances to militants as well as funds to their ringleaders meant to procure weapons on the black market.

In return, the report added, the militants were expected to deter Hezbollah resistance fighters and Iran military advisers from the Israeli-occupied Golan.

In an interview with the New York Times earlier this week, Eizenkot acknowledged that Israel had carried out “thousands” of airstrikes in Syria in recent years.

The occupying regime has been providing medical treatment to extremist elements wounded during fighting in Syria.
Tel Aviv frequently attacks military targets inside Syria in what is considered as an attempt to prop up Takfiri terrorist outfits that have been suffering heavy defeats against Syrian government forces.

Syria has complained to the UN again about Israel’s new air raids, stressing that the “cowardly” attacks will fail to hamper its resolve to confront terrorists.

On Saturday, Syria complained to the UN about Israel’s latest air raids, stressing that the “cowardly” attacks would fail to hamper its resolve to defend the country and confront its enemies.

The Foreign Ministry said that the Israeli actions in Syria were no different from those of Takfiri terrorist groups such as Daesh and al-Nusra Front. 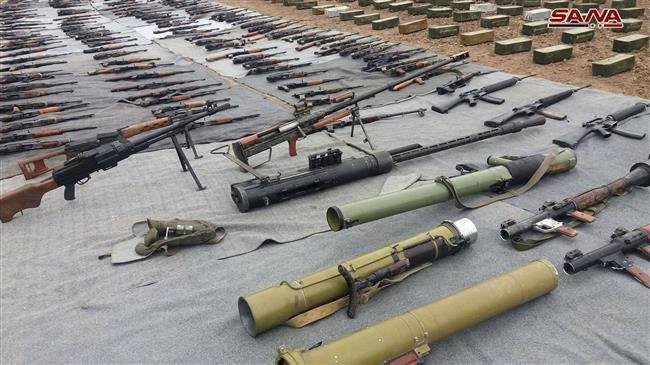 This picture shows munitions discovered by Syrian government forces at militant redoubts in the country’s southwestern provinces of Rif Dimashq and Quneitra on December 6, 2018. (Photo by SANA)