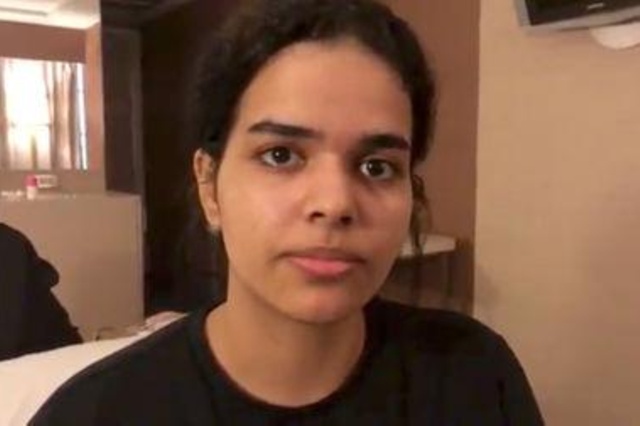 Rahaf Mohammed al-Qunun, a Saudi woman who claims to be fleeing her country and family, is seen in Bangkok, Thailand January 7, 2019 in this still image taken from a video obtained from social media. TWITTER/ @rahaf84427714/via REUTERS

BANGKOK (Reuters) – The father of an 18-year-old Saudi woman asylum seeker who fled to Thailand saying she feared her family would kill her, has arrived in Bangkok and wants to meet his daughter, Thailand’s immigration chief said on Tuesday.

But Rahaf Mohammed al-Qunun’s father and brother would have to wait and see whether the UN refugee agency would allow them to see her, immigration chief Surachate Hakpan said.

“The father and brother want to go and talk to Rahaf but the U.N. will need to approve such talk,” Surachate told reporters.

The U.N. refugee agency on Tuesday said it was investigating Qunun’s case after she fled to Thailand saying she feared her family would kill her if she were sent back to Saudi Arabia.

Activists are concerned about what Saudi Arabia will do after Thai authorities reversed a decision to expel her and allowed Qunun to enter the country under the care of the UNHCR.

Qunun is staying in a Bangkok hotel while the UNHCR processes her application for refugee status, before she can seek asylum in a third country.

UNHCR staff were interviewing her on Tuesday after meeting her the day before.

“It could take several days to process the case and determine next steps,” UNHCR’s Thailand representative Giuseppe de Vincentiis said in a statement.

“We are very grateful that the Thai authorities did not send back (Qunun) against her will and are extending protection to her,” he said.