Imran Khan’s treatment of Asia Bibi is a dangerous betrayal 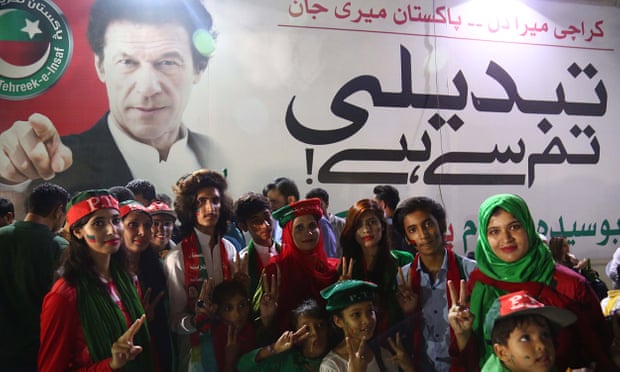 While Pakistan’s blasphemy law has long been a flashpoint, the leader’s capitulation to violent extremists is deadly serious

‘Imran Khan is far from being the first prime minister in Pakistan to pander to the conservative religious lobby’ Photograph: Shahzaib Akber/EPA

On 31 October, Pakistan’s supreme court acquitted Asia Bibi, a 54-year-old Christian woman who had been sentenced to death for blasphemy. Bibi, a farm labourer and mother of five, had spent eight years on death row, accused of insulting the Prophet Muhammad after an argument with her neighbours. After her acquittal, protests erupted in all of Pakistan’s major cities: smashed shopfronts, blocked motorways, burning tyres. And it has left the prime minister, Imran Khan, wavering between defending the verdict and trying to appease the hardline religious protesters.

Perhaps more than any other individual, Bibi has become a symbol of Pakistan’s blasphemy laws. To liberals and secularists in the country – as well as to outsiders – this law is brutal, disproportionate and inhumane. Blasphemy in Pakistan carries the death sentence but, despite this harsh penalty, has a remarkably light burden of proof. The accuser can refuse to repeat the allegation in court for fear of blaspheming themselves; the law sets no standards for evidence and no requirement to prove intent. Lower court judges – such as those who condemned Bibi to eight years on death row – are often afraid to acquit in blasphemy cases because of the threat of mob violence. More than 60 people have been killed by mobs after blasphemy accusations since 1990.

To Islamists and conservatives, however, the law has become emblematic of Pakistan’s status as a Muslim state. It is therefore seen as something that must be defended at all costs. While the blasphemy law has been a political flashpoint for years, a specific movement has coalesced around it since Bibi’s arrest. In 2011, two politicians who had spoken up for her release were murdered – the Punjab governor, Salman Taseer, and the only Christian cabinet member, Shahbaz Bhatti. Taseer was murdered by his bodyguard, Mumtaz Qadri, who was executed in 2016. Mass protests were held by Islamist groups, who have held up Qadri as a hero.

In 2015, a political movement called Tehreek-e-Labbaik Pakistan (TLP), which exists more or less only to defend the blasphemy law, sprung up. As is so often the case in Pakistan, these extreme elements have been pandered to by mainstream politicians, which provides the space for them to flourish and grow. After the assassinations of Taseer and Bhatti, tentative discussions of reforming the blasphemy law were shelved, sending a clear signal that violence works. During this year’s election campaign, the winner, Khan, appealed to this section of the voter base by vowing to “defend” the blasphemy law.