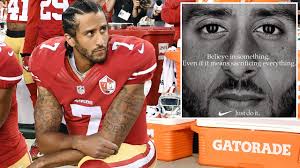 The College of the Ozarks wants you to know it does not like Nike’s ad campaign with Colin Kaepernick.

The private Christian school located south of Branson, Missouri, said Wednesday that it would be dropping its affiliation with Nike over the Kaepernick “Just Do It” ad campaign.It’s not the first time the school has taken a stand with something Kaepernick-related.

Nike ‘promoting an attitude of division and disrespect toward America’