Turkey will start looking for new allies if US attacks persist, Erdoğan warns 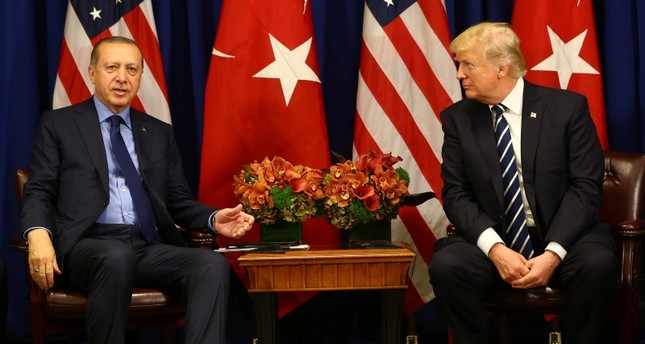 President Recep Tayyip Erdoğan warned Turkey would start looking for new friends if the U.S. continues with its unilateral actions against its NATO ally amid a diplomatic row that has brought relations between Ankara and Washington to a new low.

In an article published on the New York Times Saturday, Erdoğan said U.S. President Donald Trump sanctions against Turkey over the detention of terror-linked American pastor Andrew Brunson was “unacceptable, irrational and ultimately detrimental to our longstanding friendship,” warning these actions would only undermine American interests and security.

“Attempting to force my government to intervene in the judicial process is not in line with our constitution or our shared democratic values.”

Earlier on Friday, Trump announced a doubling of steel and aluminum tariffs on Turkish imports days after a Turkish delegation returned from Washington with no progress on the detention of pastor Brunson.

Erdoğan said the two countries have been strategic partners and NATO allies for six decades and reminded Washington that Turkey and the U.S. “stood shoulder to shoulder against common challenges during the Cold War and its aftermath”.

“Over the years, Turkey rushed to America’s help whenever necessary,” he said, listing some of the occasions the two countries acted together.

“Our military servicemen and servicewomen shed blood together in Korea. In 1962, the Kennedy administration was able to get the Soviets to remove missiles from Cuba by removing Jupiter missiles from Italy and Turkey.

“In the wake of the Sept. 11 terror attacks, when Washington counted on its friends and allies to strike back against evil, we sent our troops to Afghanistan to help accomplish the NATO mission there,” Erdoğan said.

The Turkish president blamed Washington for “repeatedly and consistently failing to understand and respect the Turkish people’s concerns.”

He said the U.S.’ response to the July 15 bloody coup attempt in 2016 was far from satisfactory with American officials calling for “stability and peace and continuity within Turkey” and not showing any effort to extradite coup leader Fetullah Gülen.

Erdoğan also mentioned U.S.’ support for the terrorist PKK’s Syrian affiliate, the People’s Protection Units (YPG) in northern Syria, as another source of frustration. He said Washington used 5,000 trucks and 2,000 cargo planes to deliver weapons to the Syrian branch of an “armed group that is responsible for the deaths of thousands of Turkish citizens since 1984 and that is designated a terrorist group by the United States.”

Erdoğan urged Washington to give up the misguided notion that bilateral relations could be “asymmetrical” and realize that Turkey had alternatives “before it is too late”.

“Failure to reverse this trend of unilateralism and disrespect will require us to start looking for new friends and allies,” he added.

The two NATO allies have been at odds since the defeated coup, which Ankara accused U.S.-based Fetullah Gülen and his Gülenist Terror Group (FETÖ) of masterminding.