Parents Told To Guard Children To Use Social Media Responsibly 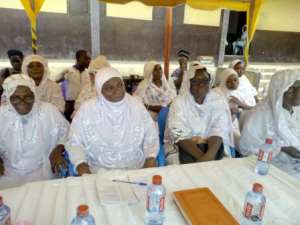 Muslim parents, especially mothers have been urged to encourage, guide and educate their children on how to use Information Communication Technology (ICT) responsibly in order to protect them from being exploited online.

This, according to Mrs Fatimah Ewudzie Saeed, Former Central Regional President of the Women’s wing of the Ahmadiyya Muslim Mission, was key to maximising the benefits in the fast changing World of ICT.

Mrs Saeed, an educationist also advised parents not to devote all their time amassing wealth but rather ensure that their children were exposed to the appropriate religious values which would empower them to become responsible adults.

She was speaking on the theme ‘Technology and social media: a tool for effective preaching or unguarded pleasure’ at the first annual zonal conference of the Ahmadiyya Muslim Women’s wing (Lajna Imaillah) in the Abura zone.

‘The Holy Quran spoke about technology some 1,400 years ago. So as Muslims, we are the first to know about technology and therefore we must own the technology, be abreast with it and use it to bring people to Islam’ she stated.

According to her, technology had come to stay and it was important for stakeholders, especially parents and teachers to educate children on the use of mobile phones and other internet devices.

She said children, if left unchecked, out of curiosity may find some websites with pornographic materials or talk long hours on their mobile phones with their friends instead of using it to improve their academic work.

She advised the Muslim women to make it a point to listen to the Friday sermons of their spiritual leaders, use their free period to read Islamic literature rather than watching telenovelas which would not benefit them in any way.

She further admonished them to be mindful of their dressing and cautioned the young women about the kind of things they posted on social media.

Maulvi Ahmed Tahir Mirza, Abura Zonal Missionary of the Ahmadiyya Muslim Mission said social media had come to change every aspect of the society in the current generation which parents could not deprive their children of.

‘It has become part of our children’s education so we cannot t stop them from using it. We can only supervise and guide them on the responsible use of the technology’ he stated

‘If our generation learn the positive use of ICT and social media, it is very good for our future, but if parents do not know what their children are using social media for, then we are doomed’ he added.

In this regard, he said parents, older siblings, teachers and guardians and all stakeholders must take up the responsibility to educate the younger generation on the negative effects of ICT.

Madam Ophelia Sampson, Cape Coast North Women’s Organiser for the National Democratic Congress (NDC) encouraged the women to aspire to take positions in the society adding that, nothing should prevent them from taking active part in politics for the progress of the nation