Austrian presidency of the EU: Tough times ahead for Turkey 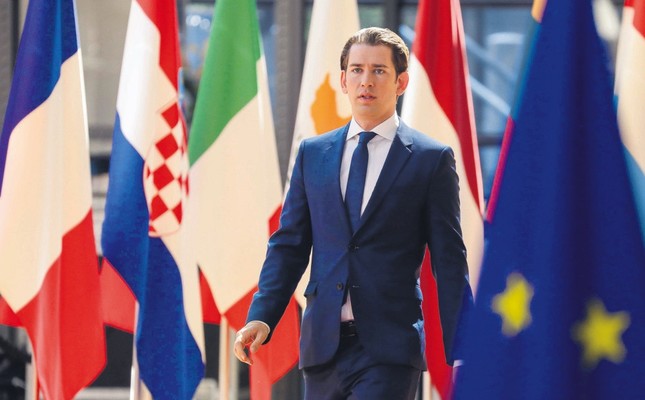 Austria’s Chancellor Sebastian Kurz arrives to take part in the last day of the EU leaders’ summit at the Europa building, Brussels, June 29.

There are people in Turkey who wish they lived under the reign of Abdulhamid II, the last grand monarch of the late Ottoman Empire. The Union and Progress Party of Enver Pasha, who overthrew the sultan and presided over the fatal destiny of the empire in its last decades, made his name and deeds infamous.

Nowadays, we have witnessed a “rebirth” of this period through TV series, books and articles this time depicting Abdulhamid II as a clever and wise politician – which most probably he truly was. Seeing people becoming nostalgic about the final days of a multi-centennial empire may seem childish, but these Turks are evidently not alone. There is a sizeable number of people in Austria who probably still think they live under the wise guidance of Emperor Franz-Joseph and that their duty is to contain and dismantle anything Ottoman related in the Balkans.

There seems to be no other explanation for the very hostile 15-year Austrian stance toward Turkey anytime the latter approaches the EU. It is unclear why the European country opposes Turkey each time there is a problem with the EU; or perhaps it is redundant to say “each time there is a problem” because since 2006, we have only had problems in our relations with the bloc.

I have had many opportunities to write about the nature and extent of our problems. I denounced the way EU countries have worked to oust Turkey, unofficially, from the sphere of integrative institutional relations. On the other hand, it is a tangible fact that Turkey abandoned its efforts long ago to harmonize with the EU.

The migration crisis in the Aegean has brought the EU and Turkey somewhat together in recent years. The humanitarian tragedy, coupled with the xenophobic tendencies of some Balkan countries’ management of illegal migrants has obliged both parties to cooperate and devise a common solution to the problem.

The solution was forged out quite swiftly. It was logical, efficient and balanced. The agreement signed between Turkey and the EU has created so much outcry in the past that its balanced nature has gone totally unnoticed. Most of the time, it was seen as a terribly inhumane to bargain over the fate of the illegal migrants. Still, it has demonstrated its efficiency very quickly, with the road from Turkey to Greece on frail skiffs almost nonexistent. Illegal migration over land routes to Central European countries through the Balkans has also drastically declined.However, the agreement also encompassed a structural dimension.

The EU would finance two programs of insertion for the migrants in Turkey, worth 6 billion euros in total. The first phase has almost been totally funneled to numerous projects, prepared in cooperation with the EU. The second phase will start in coming weeks.The third and most important component of the agreement was aimed at revitalizing the dormant and moribund relations between Turkey and the EU. Not only would the EU take a step toward Turkey by lifting visa requirements for Turkish nationals, but also with the opening of Chapter 33, which covers the rules on using resources necessary for the funding of the EU budget with membership. This chapter was closely linked with the policy areas on statistics, financial control, taxation and the customs union. The customs union, which badly needed updating, was also on the agenda, and the negotiations to revise and deepen the customs union were an integral part of the agreement.

It is always rewarding to refer to primary sources. Let us review the agreement:

The EU and Turkey agreed that:

1. All new irregular migrants crossing from Turkey to the Greek islands as of March 20, 2016 will be returned to Turkey.

2. For every Syrian being returned to Turkey from the Greek islands, another Syrian will be resettled in the EU.

3. Turkey will take any necessary measures to prevent new sea or land routes for irregular migration from Turkey to the EU.

4. Once irregular crossings between Turkey and the EU end or have been substantially reduced, a voluntary humanitarian admission scheme will be activated.

5. The fulfilment of the visa liberalization road map will be accelerated with the goal of lifting the visa requirements for Turkish citizens at the latest by the end of June 2016. Turkey will take all the necessary steps to fulfil the remaining requirements.

6. The EU will, in close cooperation with Turkey, further speed up the disbursement of the initially allocated 3 billion euros under the EU Facility for Refugees in Turkey. Once these resources are about to be used in full, the EU will mobilize additional funding for the facility up to an additional 3 billion euros by the end of 2018.

7. The EU and Turkey welcomed the ongoing work to upgrade the customs union.

8. The accession process will be re-energized, with Chapter 33 to be opened during the Dutch Presidency of the Council of the European Union and preparatory work on the opening of other chapters to continue at an accelerated pace.

9. The EU and Turkey will work to improve humanitarian conditions in Syria.

As is, the agreement looks very much like a pure product of realpolitik, but heavily amended by an attempt to bring Turkey closer to the acquis communautaire and the EU’s main principles. In that sense, better democratic functioning could have ignited virtuous development between Turkey and the EU back in 2016.

Alas, the contrary has happened, with the most recent declaration made on June 26 by the EU concerning Turkey reading: “The council notes that Turkey has been moving further away from the European Union. Turkey’s accession negotiations have therefore effectively come to a standstill and no further chapters can be considered for opening or closing and no further work toward the modernization of the EU-Turkey customs union is foreseen.” If nothing else, such a stance has the merit to be clear. It is a closed door in the face of Turkey – with the exception of issues related to refugees.

The only country among the 28 that wanted an official halt in the negotiation process has been Austria. Compared to the Bulgarian presidency, which organized the Varna Summit, Austrians look sorry indeed when it comes to sophisticated diplomacy. For a country who has had Bruno Kreisky as prime minister for a long time, the present situation is a sad one. Sebastian Kurz, for reasons that go beyond common mortals’ understanding, has opted for a “Sarkozy-like” position against Turkey. Combined with the very anti-EU and anti-migration stance of the Visegrad countries, namely the Czech Republic, Slovakia, Hungary and Poland, this radical position on the part of Austria bodes nothing positive. To add insult to injury, Austria has started a large campaign to deport Turks of Austrian nationality who have kept their original nationality – a move forbidden by Austrian legislation. This move has turned into a collective hysteria to deport Turks who seemingly voted for President Recep Tayyip Erdoğan. Shall we remember the admirable novel written by Henri de Montherlant and weep by saying, “Woe to thee, O land, when thy king is a child, and thy princes eat in the morning!”