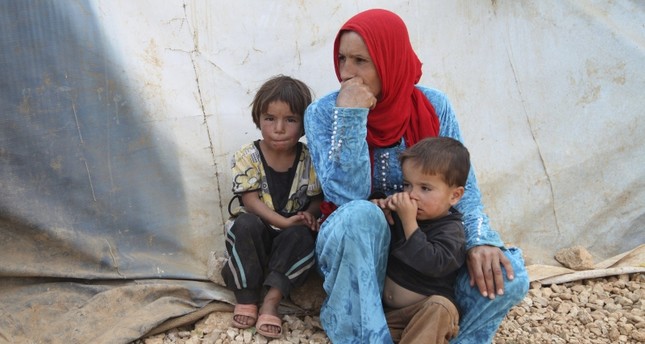 Syrian refugees from Raqqa rest near their tents in the Bekaa valley, Lebanon October 19, 2015. (Reuters Photo)

Lebanon’s top diplomat warned Saturday that a recent Syrian property law could dispossess hundreds of thousands of Syrian refugees from their land back home, leaving them permanently displaced in Lebanon.

The law, known as Decree 10, allows Bashar al-Assad’s regime to seize private property for zoned developments and compensate proven owners with shares in the new projects.

But rights groups and lawyers fear that millions of Syrians who have sought safety abroad do not have the right paperwork or enough time to claim their land.

In a letter to his Syrian counterpart Walid Muallem, Bassil expressed “Lebanon’s fear that the conditions imposed by this law will hinder the return of a not-insignificant number of displaced to their hometowns.”

Once an area is declared a new development zone under Decree 10, owners inevitably lose their property.

They can, however, get shares in the new project by proving they owned land there within 30 days of the decision being publicly announced.

“The inability for displaced to prove ownership in the provided timeframe could cause the to lose their property… and dispossess them of one of their main incentives to return to Syria,” said Bassil.

Lebanon, a country of just over four million people, has seen its water, electricity, and waste removal infrastructure strained by the influx of Syrian refugees.

Officials have ramped up calls recently, especially before the country’s parliamentary elections earlier this month, for Syrian refugees to go back to parts of their homeland where violence has died down.

Despite some returns to slivers of Syria, the United Nations says the country as a whole remains still unsafe for civilians to return to.

Bassil on Saturday sent a matching letter to U.N. Secretary General Antonio Guterres, demanding the U.N. inform Syrians in Lebanon on the content of this law.

The U.N. should “do whatever necessary to protect the rights of displaced Syrians to retain their property,” and to communicate with Damascus on the subject, it said.

Bassil’s comments come just days after President Michel Aoun demanded Syrians “return to safe areas in their country, without waiting for a final solution to the Syrian crisis.”

“This total invention of Decree 10 has no purpose but to prevent these displaced from going back to their country,” he said.

Syria’s war erupted in March 2011 and has since forced more than five million people to flee outside the country and has displaced over six million internally.