‘The Cold War is back with a vengeance,’ warns UN chief Guterres 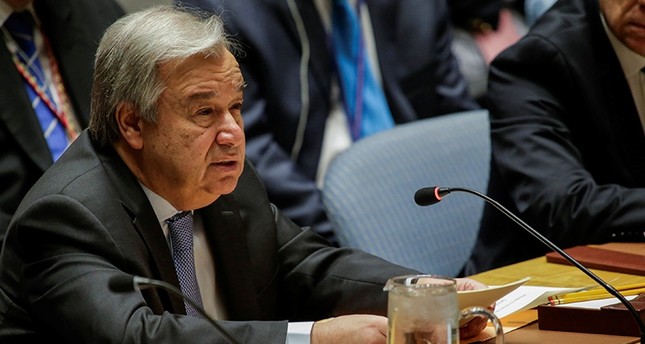 Secretary-General Antonio Guterres warned Friday that escalation between Russia and the U.S. and its allies over the crisis in Syria risks “spiraling out of control” and poses a serious threat to global peace and security.

“The Cold War is back — with a vengeance but with a difference,” Guterres warned at an emergency meeting of the U.N. Security Council.

And he said the safeguards and mechanisms that managed the risk of escalation between the U.S. and the Soviet Union in the past “no longer seem to be present.”

Russia called the council meeting to focus on the threat to international peace and security from possible military action against Syria by the United States and its allies. But the secretary-general took a much broader view of the often-interlinked factors escalating the chaos and threatening peace in the Middle East.

The U.N. chief said that the highly volatile situation in the region risks “escalation, fragmentation and division as far as the eye can see, with profound regional and global ramifications.”

Guterres cited the Palestinian-Israeli divide, the Sunni-Shiite divide “evident from the Gulf to the Mediterranean,” opposing attitudes on the Muslim Brotherhood, threats to communities that have lived in the region for millennia, and other factors.

“This multiplicity of divides is reflected in a multiplicity of conflicts with different degrees of interconnection, several of them clearly linked to the threat of global terrorism,” he said.

Guterres warned that “many forms of escalation are possible.”

The Palestinian-Israeli conflict is deepening again, he said.

And in what appears to be implicit criticism of Israel for its use of force against protesters, Guterres said, “The recent violence in Gaza has resulted in many needless deaths and injuries.” He also reiterated his call for “an independent and transparent” investigation of the incidents.

In Yemen, which faces the world’s worst humanitarian crisis, Guterres called for a negotiated political settlement to the three-year stalemated war that has killed more than 10,000 people. He said it is also “high time to end the Libyan conflict.” And he said it is “absolutely essential” to avoid a new conflict between Israel and Lebanon’s Hezbollah militia which could be more deadly and destructive than the last war.

In Syria, Guterres said, “we see confrontations and proxy wars involving several national armies, a number of armed opposition groups, many national and international militia, foreign fighters from everywhere in the world, and various terrorist organizations.” He singled out “recent confrontations between Iran and Israel in Syria.

In this “bleak panorama,” the secretary-general said he was “outraged” by continued reports of chemical weapons use in Syria. He strongly backed the Organization for the Prohibition of Chemical Weapons’ fact-finding mission to investigate last weekend’s suspected poison gas attack in the Damascus suburb of Douma, saying the first OPCW team is already in Syria and “a second is expected today or tomorrow.”

The secretary-general urged the deeply divided Security Council, which has been paralyzed over Syria, to agree on a new body to determine responsibility for chemical attacks.

Increasing tensions and the inability to reach a compromise “threaten to lead to a full-blown military escalation,” Guterres warned, and risk “that things spiral out of control.”