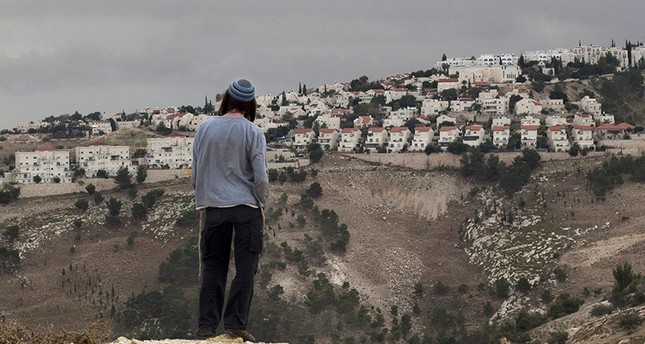 In this Dec. 5, 2012 file photo, a Jewish settler looks at the West bank settlement of Maaleh Adumim, from the E-1 area on the eastern outskirts of Jerusalem. (AP Photo)

The number of Jews and Arabs between the Mediterranean Sea and Jordan River is at or near parity, figures cited by Israeli officials show, a development that prompts questions on the necessity of a two-state solution as Israel’s Jewish political majority may soon lose its grip.

The population statistics were mentioned in an Israeli parliamentary statement on Monday summing up legislators’ questioning of an official of Israel’s military-run civil administration (COGAT) that coordinates government activities in the Israeli-occupied West Bank and in the Gaza Strip.

Demography is studied closely on both sides of the Israeli-Palestinian conflict because of its potential implications for both societies as they weigh possible solutions as Israel celebrates its 70th anniversary next month.

With over a “two-state solution” frozen since 2014, some argue that if Israel becomes a binational state through annexation of land seized 51 years ago, it could one day be forced to choose between remaining a democracy or securing a Jewish majority by denying Palestinians the vote.

“We estimate the [Palestinian] population in Judea and Samaria at between 2.5 million and 2.7 million,” Colonel Uri Mendes, COGAT’s deputy director, using Israel’s term for the West Bank, told a session of the Knesset’s Foreign Affairs and Defense Committee. He noted that a Palestinian census put the figure even higher, at 3 million.

Avi Dichter, the committee’s chairman and a former head of Israel’s Shin Bet security service, responded that with the addition of Gaza’s 2 million Palestinians, that meant there was now a total of about 5 million Palestinians living in the two territories that fell to Israel in the 1967 Middle East war.

Taking the higher end of the Israeli figures cited and adding them to the 1.84 million Arabs living inside Israel, according to Israel’s Central Bureau of Statistics (CBS), would bring the total number of Arabs in Israel and the Israeli-occupied territories to around 6.5 million.

This is around the same number of Jews living between the Jordan Valley and Mediterranean, according to the CBS.

Jewish settlements in the occupied territory of Palestine have dimmed Palestinian hopes of a viable and contiguous country of their own with East Jerusalem as its capital.

Israeli settlers immediately disputed the population figures, citing one study that put the number of Palestinians in the West Bank at 1.8 million.

“The slanted publication about Arab demography in Judea, Samaria and the Jordan Valley relies on data from the Palestinian statistics bureau which are not true or accurate. They (Palestinians) have an interest in inflating the numbers,” settler spokesman Yigal Dilmoni said.

But Ahmed Tibi, an Arab legislator in the Israeli parliament, described the figures as accurate and “well-known to us for a long time.”

Without the creation of a Palestinian state, Tibi said, Israel will be headed toward a “one-state solution” embracing either “apartheid or an Arab-Palestinian prime minister.”

Ofer Shelah, a committee member from the opposition centrist Yesh Atid party, said it is clear the Jewish majority between the Jordan River and the Mediterranean is “precarious.”

“From a demographic perspective, if Israel does not part with the Palestinians then there is real danger to realizing the Zionist dream of a Jewish and democratic Israel,” Shelah told Reuters.

Sergio DellaPergola, a demographer and professor emeritus at the Hebrew University of Jerusalem, said one state taking in two nations was not viable.

“The answer is separation, the answer is manifestly separation. Two countries for two people, which of course has to be negotiated,” said DellaPergola.