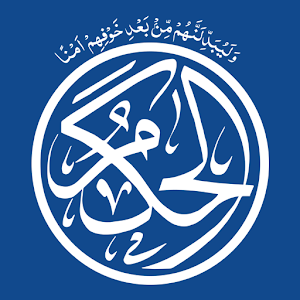 Al Hakam
Al Hakam, in its first phase, was launched in 1897 by the Promised Messiah in Qadian, India. Relaunched now in the era of his fifth successor, Hazrat Mirza Masroor Ahmad, Al Hakam is brought to you through the most modern resources and that too in the English language. Read the latest issue every Friday and join the global readership of this newspaper. Download articles, share with friends and family or save them for your record.
Al Hakam News & Magazines 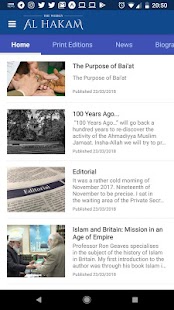 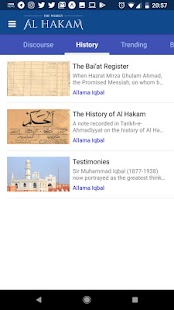 Please go to Google Store and install this App on your mobile device !

The History of Al Hakam

A note recorded in Tarikh-e-Ahmadiyyat on the history of Al Hakam (Urdu) written by Dost Mohammad Shahid sahib, Historian of the Jamaat

It had been eight years since the Jamaat had been established and it still had no newspaper of its own.

The Promised Messiah, on whom be peace, and his companions felt the need but financial constraints were a hindrance.

Finally, a courageous and enthusiastic youth of the Jamaat, Hazrat Sheikh Yaqub Ali Turab, Allah be pleased with him, (who was then based in Amritsar and was by then an acclaimed journalist in the intellectual circles) was inspired to write a request to the Promised Messiahas. The Promised Messiahas replied to his request in his own writing, the summary of which is:

We have no experience in this field. There is a need for a newspaper but our Jamaat comprises of poor people and is unable to bear financial strains. If you can do this through your experience, then you may do so. Allah bless this effort.

Hazrat Sheikh Yaqub Ali Turabra too had no financial resources. Some of his friends were adamant that he join the civil service, but Allah the Almighty helped him and an esteemed newspaper like Al Hakam was materialised in Urdu.

The first issue of Al Hakam was published on 8 October 1897 and up to the end of the year, was printed at Riaz-e-Hind Press in Amritsar and was based also in Amritsar. It was in the beginning of 1898 that it started to be published from Qadian. With a few breaks here and there, Al Hakam was successfully published until July 1943.

In the second phase of its publication, it was edited by Sheikh Mahmud Ahmad Irfani (son of Hazrat Sheikh Yaqub Ali Turabra), and successfully did so until his death.

“In August 1897, Henry Martyn Clark brought about a lawsuit against the Promised Messiahas. I recorded the minutes of this court-case under the title Doosri Jang-e-Muqaddas [literally meaning the second holy war; named after Jang-e-Muqaddas which was an account of the debate between the Promised Messiahas and the Christian clergy held in Amritsar]. I strongly felt the need of a newspaper to express the viewpoint of the Jamaat and also to refute the allegations of political and religious nature that were brought about against the Jamaat. So, Al Hakam was launched in October 1897. The Government was against the press in those days and the present Press Act was about to be passed, but in these unfavourable circumstances, I launched the paper purely relying on Allah.

“At the end of 1897, a relaunch of the Paisa Akhbar was being considered and I had accepted the offer of Munshi Mahbub Alam to be on the editorial staff. I was of the opinion that Al Hakam should be based in Lahore, and based on this, I had joined the Paisa Akhbar. But when I attended the Jalsa Salana, Qadian in December 1897, a resolution was moved for the establishment of a madrasah [school], for which I offered my services; thus, destiny brought me to settle in Qadian.

“At the launch of Al Hakam, discouraging factors like the decline in religious taste and the rise in opposition of Ahmadiyyat were brought to my attention, asserting that Al Hakam would result in failure.

“The Editor of Al Hakam [referring to himself] came to Qadian in January 1898, sacrificing, for the sake of Qadian, the newfound ties with the Paisa Akhbar and other prospective benefits associated with Lahore; by the Grace of Allah, I feel I have been prosperous. It was a great challenge to access a press in Qadian; there was no press, no designers and no copywriters, nor did any of these want to come and settle in Qadian. However, the Editor continued to handle these challenges.”

The newspaper turned into a treasure house of the writings of the Promised Messiahas, an authentic source of history and a milestone for the Jamaat.

Al Hakam served this unique cause singlehandedly up to 1901, making it an extraordinary example. Then the newspaper Al Badr joined in sharing the sacred responsibility of publicising the sayings and writings of the Promised Messiahas alongside the blessed revelations he would receive. The Promised Messiahas would refer to Al Hakam and Al Badr as “the two arms of the Jamaat”.

At the second launch of Al Hakam in 1934, Hazrat Mirza Bashiruddin Mahmud Ahmadra, the second Khalifa of the Promised Messiah, issued a special message stating:

“Al Hakam is the first ever newspaper of the Jamaat and the service it has rendered, as well as Al Badr in the last years of the Promised Messiahas, can never again be done by any newspaper even in exchange of millions of rupees.

“I declare that whether Al Hakam survives in its present form or not, its name will forever endure. No significant work on the Jamaat can be complete without its mention as it carries the history of the Jamaat.”

In the name of Allah, the Gracious, the Merciful

We praise Him and invoke blessings on His Noble Prophet, and upon his servant, the Promised Messiah

With the grace and mercy of God

He is the Helper

Alhamdolillah, after a long period, Al Hakam newspaper is being launched online.

Al Hakam bears great significance in that it was the first newspaper of the Jamaat, established during the life of the Promised Messiah, peace be upon him. Then, after a long interval it was re-established in 1934 during the time of Hazrat Khalifatul Masih II, Allah be pleased with him, by Irfani sahib. Now, Allah the Almighty has granted the opportunity to Asif Mahmood Basit sahib to launch it once again, on the internet.

May Allah enable this newspaper to be published regularly and may Allah accept the desire of Hazrat Khalifatul Masih II, Allah be pleased with him, which he expressed in 1934 upon its relaunch:

“Its name will forever endure. Not even the most important of Jamaat tasks can be achieved without mentioning it because it bears the history of the Jamaat . . . It is my heartfelt desire that Al Hakam, the name which suggests the reverence given to the Promised Messiah, peace be upon him, by members of the Jamaat, remains in its physical form also.”

Now that it is being relaunched with the effort of our youth, may Allah enable this newspaper to remain forever and may it continue unimpeded so that we never see its termination.

May Allah always help those who work for this newspaper and may Allah the Almighty also enable its readers to derive true benefit from it. Now that it is to be published in English, I hope, and it is my prayer, that it will prove to be a beneficial organ of the Jamaat for the English readership, Insha-Allah-Ta’ala.