Tensions grow between the US, Turkey

Turkey, where President Recep Tayyip Erdogan has doubled down on anti-American rhetoric by appearing to threaten US troops in Syria.

Turkey has bristled at the US military’s alliance with Syrian Kurds to fight ISIS, fearing the Syrian group will one day help Turkish Kurds make a push for independence. Turkey has sent its troops to attack a Kurdish enclave in Syria and it threatens to push into a town where US forces train Kurds and others, leading the Pentagon to warn Ankara away.
“It is clear that those who say, ‘We will respond aggressively if you hit us,’ have never experienced an Ottoman slap,” Erdogan said in response on Tuesday, according to news reports.
Erdogan’s comment was just the latest salvo from an ally who has accused the US of complicity in a coup attempt, eroded democratic norms within the country, jailed Americans on flimsy grounds and detained US consulate workers. 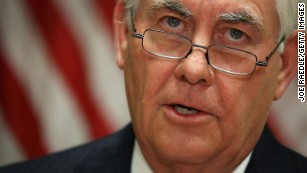 Tillerson claims Middle East peace plan is ‘well advanced’
Beyond threats about a clash with US forces, Turkey’s move to attack the Kurdish enclave of Afrin in northwest Syria could undermine the coalition fight against ISIS, as Kurdish YPG fighters who are helping the US rout the terrorist group in the east have begun leaving to help their compatriots in Afrin.
MORE:    https://edition.cnn.com/2018/02/15/politics/tillerson-turkey-erdogan-tensions/index.html