Sea bug attack: Why was a wading teenager left covered in blood? 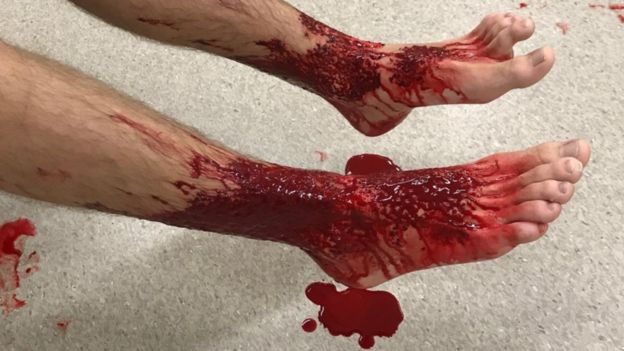 What could leave a person’s ankles and feet covered in blood as they stood, unaware of what was happening, in shallow water on a popular beach?

Images of 16-year-old Sam Kanizay’s injuries in Melbourne, Australia, have seized attention around the world.

His father, Jarrod Kanizay, said his son had arrived home with what “looked like a war injury” after soaking his legs in Melbourne’s Brighton Beach following a football game.

What was the likely culprit?

Mr Kanizay said doctors could not say for certain, so he returned to the bayside beach and used pieces of steak to capture “thousands of these little mite-type bugs”.

“I collected these strange creatures from the same spot last night by trapping them in a net and standing in the water myself,” he told the BBC.