Stepping out of an apartment complex into a warm Ohio night, Nashwaan Saddoon got into an old minivan and drove through Toledo to a hookah joint called Rocket Lounge. Sitting beside him was his friend, Amjad Arafeh. The two men had met only five months earlier, but they lived in the same building and already they were very close, despite their different backgrounds. Saddoon, an Iraqi Christian refugee, had been kidnapped and held hostage by Islamic State militants a few years before. Arafeh, a Syrian Muslim refugee, had escaped shelling and bombing in Damascus.

When the minivan pulled up to Rocket Lounge, Saddoon and Arafeh joined the group of Arabs and Midwesterners assembled outside for their monthly Sawa gathering. Sawa, which means “together” in Arabic, is a community initiative designed to introduce refugees to Americans and to each other. 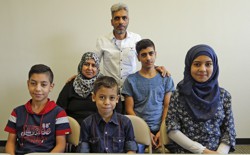 At this particular gathering, someone needed a letter from the Lucas County Department of Jobs and Family Services translated from English into Arabic. He passed the paper around to get advice from the other men, including a refugee from Sudan, a Syrian American who had arrived four years earlier, a Toledo resident named Jake, and a case manager from a local refugee assistance organization.

Amid the serious business, men cracked jokes and took jabs at one another. Some seemed eager to have a guys’ night out, while others, in their silence, were harder to gauge. Saddoon and Arafeh sat side by side, chatting and laughing.