Tru love: Canada’s year of Justin Trudeau has been a honeymoon, but will it last?

The optimistic prime minister has charmed Canadians, and the world, during his first year in office. Now the challenge is to prove he’s a change maker

The line to get in stretched around the block and deep into a hotel parking lot.

Thousands of people had turned up to an election campaign event in Medicine Hat, a small Albertan city in Canada’s conservative heartland, hoping to catch a glimpse of Justin Trudeau. 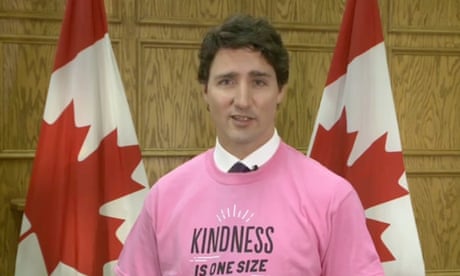 About 800 of them made it inside, cheering wildly as Trudeau spoke of first visiting the city with his father when he was just seven months old. Later, the Liberal party leader waded into the crowd outside, shaking hands and snapping selfies with admirers among the 1,600 or so people who had teemed around loudspeakers to hear his speech.

The boisterous welcome came not during the election campaign which swept Trudeau to power, nor during the heady days after he assumed office 12 months ago – it took place during a local byelection last month, and offers a snapshot of an extraordinary political honeymoon that has come to define Trudeau’s first year in office.

“This is really uncharted territory,” said Nik Nanos of Nanos Research. “In my 20 years of experience, no one has had a one-year honeymoon.”

Others question whether honeymoon is the appropriate word to capture what exactly is going on. “Honeymoons last maybe a month or two, maybe three – but not a year. This is something else,” said Frank Graves of EKOS Research Associates. “Certainly in the time I’ve been polling – which is a pretty long time – I’ve never seen anything like this.”

Friday marks one year since Trudeau took power in Canada. The 44-year-old former high school teacher and snowboarding instructor swept into parliament at the helm of a majority government, after campaigning on an ambitious manifesto which promised to take bold action on climate change, revive the country’s sluggish economy and reset the country’s relationship with indigenous peoples.

This is really uncharted territory. In my 20 years of experience, no one has had a one-year honeymoon

During the election campaign, his team racked up 219 promises that seemingly offered something for everyone. So far, 34 of these promises have been fulfilled and 64 are in progress. In their first year, the government has unmuzzled government scientists, ended Canada’s airstrikes against Isis and brought in 33,239 Syrian refugees, among other actions.

It hasn’t all been smooth sailing; Trudeau and his government have been disparaged by indigenous people who continue to feel sidelined from decision making and Green voters who wonder why the government has adopted the carbon cutting targets of its predecessors. Revelations of fundraisers offering access to cabinet ministers for up to $1,500 a ticket have sparked questions about government transparency while at a youth labour forum last week, dozens of delegates turned their backs to Trudeau , heckling him to honour his promises on pipelines and tackling youth unemployment.

But most see these as small knocks for a government that has political capital to spare. Polls routinely suggest that were an election to be held today, Trudeau and his party would earn an even greater number of seats than the 184 won last yearin Canada’s 338-seat House of Commons.

“The reality is that they are very different from the previous government,” said Nanos. The Trudeau government’s popularity is hard to untangle from the divisiveness that dogged his Conservative predecessor, Stephen Harper, whose government shunned climate change obligations, slashed funding to federal efforts on gender equality and sought to ban women wearing the niqab from participating in citizenship ceremonies.

At the outset of last year’s election campaign, it was clear voters were looking for change. Many of Trudeau’s actions so far – from launching a long-awaited inquiryinto the thousands of missing and murdered indigenous women to implementing gender parity in his cabinet – have sought to demonstrate they are enacting the change they promised.

Some of Trudeau’s strength can also be explained by the weakness of the country’s major opposition parties, said Nanos. The Conservatives and the New Democratic Party are currently both lacking a permanent leader, leaving them struggling to offer a meaningful counterpoint on the right or left.

“The Liberals shouldn’t be too smug with the very strong numbers because they’re the only game in town right now,” said Nanos. Trudeau’s political honeymoon, he said, could stretch well into 2017 until the two opposition parties choose new leaders.

Trudeau’s popularity has endured even as his first nine months in office rank among the House of Commons’ least productive in more than two decades, according to data compiled by the library of parliament.

Canadians across the country regularly gather to snap selfies with the prime minister while social media gleefully shares photos of a shirtless Trudeau or as he shares an intimate moment with his wife, former television presenter Sophie Grégoire Trudeau.

“He’s prime minister selfie, right?” Bricker said, referring to the name given to him by his critics. “All of that stuff you wouldn’t see Harper do – for good or for bad. It’s very symbolic of the change.”

What emerges is an image of a young, dynamic and transparent government. “There is just generally a lightness associated with this government as opposed to what came before it,” said Bricker. “So if you wanted to change this is a 180-degree change from what existed before.”

The hard work starts now, he said. Details must be hashed out on the government’s plans to legalise recreational marijuana, reform the country’s electoral system and meet its emission targets. After a year of vague promises to strike a balance between environmental protection, a limping economy and a fraught relationship with Indigenous peoples, Trudeau’s government will be forced to put these pledges to the test in imminent decisions on several massive energy projects. “It’s the first time they’re going to actually have to pick a side,” said Bricker.

It’s a challenge that may get a boost from an unexpected source: international media. In a country long wary of being overshadowed by its southern neighbour, Trudeau has been wholeheartedly embraced by global media who delight in his feminist views or his take on quantum physics. The international attention has helped propel his popularity at home, said Graves of EKOS Research Associates. “I do believe that Canadians, one of the reasons they’re so happy with the government is that they really like the way we’re being seen on the world stage.”

It’s a sharp contrast to the previous government, he said. “Frankly I had data showing that Canadians were ashamed and embarrassed about our image with our performance on things like climate change or our policies on Israel or moving to towards militarism.”

The government’s approval rating has persisted even as stagnation and rising inequality has given rise to Canada’s worst economic outlook in two decades, said Graves. “In some respects he’s sort of tapped into the same sentiment that drove Brexit and Trump but with a very different type of message – instead of take back control and close the borders and build walls, let’s talk about sunny ways, let’s talk about a more optimistic approach.”

The government has vowed to counter the slumping economy by pumping billions of dollars into infrastructure. Vowing to restore middle-class progress, they’ve raised taxes on the top 1% to help pay for a middle-class tax cut, as well as handed out a means tested universal child benefit.

It’s an approach that will have to start delivering growth and shared prosperity soon, said Graves, or risk jeopardising the government’s unprecedented popularity.

He likened it to the other challenges facing the government as they move into their second year, from democratic renewal to climate change.

“These are really daunting challenges. So yeah, ‘we’re consulting’ will work for a while – but at some point you’ve really got to come up with some very concrete and solid answers about how to deal with those tough problems.”