Rabwah Times: The Diplomatic Council has appointed a German-Pakistani entrepreneur Jamal Ahmad Qaiser as it’s Business Ambassador and UN Commissioner. In a statement the Diplomatic Council said the 44-year-old was nominated because of his outstanding achievements and tireless efforts for international understanding. 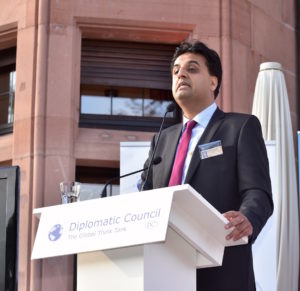 Qaiser, who was born in 1972 is a member of the minority Ahmadiyya Muslim sect which faces severe persecution in Pakistan. He started off as market trader and ended up starting his own private equity firm. In 2014, he graduated from the University of Oxford’s Saïd Business School. A year earlier in 2013 he had already enrolled into the prestigious Harvard Business School from which he successfully graduated in 2016. In March 2016 he published his first book “The strange success factor: Why do we desperately need immigrants in Germany”