The persecution of the Ahmadis must not be allowed to spread

Driven out of Pakistan, the Muslim Ahmadiyya community now have their global headquarters in the UK. They deserve our protection and respect 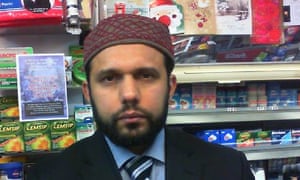 Asad Shah, an Ahmadi Muslim shopkeeper who was stabbed to death in Glasgow after posting a message of Easter greetings on his Facebook page. Today a Bradford cab driver admitted to murdering him for ‘disrespecting’ Islam. Photograph: Social media

In June 2014, Abu Bakr al-Baghdadi declared himself caliph of an Islamic State – a bit like making himself pope without asking anyone else. Most Sunni theologians thought it ridiculous. For the Shia it was an impossibility. The term caliph comes from the Arabic word for successor – variously interpreted as successor to the messenger of God or successor chosen by God. Sunni Muslims believe that the caliph should be elected, Shia Muslims that that he should be a biological descendent of the prophet Muhammad. The theological divisions between Sunni and Shia, reignited in the aftermath of the invasion of Iraq, began as a dispute over succession. And however much the disastrous invasion of Iraq exacerbated these divisions, it’s worth remembering that it didn’t create them. The first Muslim civil war erupted within 25 years of the prophet’s death, a number of the early caliphs having been assassinated by rivals.

So the subject of who gets called a caliph is dangerous stuff. Which is why it might come as a surprise to learn that tens of millions of Muslims look to the genteel south-west London suburbs as the home of their caliph, the decidedly genial His Holiness Hazrat Mirza Masroor Ahmad. This caliph does not operate out of the dust and heat of the Middle East. A former agriculturalist and keen gardener, his message is consistently one of peace. Of course he is heavily guarded – one of his predecessors was stabbed in the neck during prayers – but, as little boys stood around and literally saluted him, the caliph was happy to pass the time of day with a Christian stranger like me, invited to share in the breaking of the Ramadan fast. And he had a twinkle in his eye that suggested a mischievous sense of humour. Nice man, I thought.

But these are some of the most persecuted Muslims in the world. Originating in the Punjab, the reason the caliphate is based in Southfields is because of the victimisation that Ahmadiyya Muslims now receive in Pakistan, where they are considered the wrong sort of Muslims. In fact, since 1974 they are not considered Muslims at all. By law, they are not allowed to call their places of worship mosques or greet each other with “As-salāmu alaykum”. Their graves are desecrated. Even the application form for a Pakistani passport has a section requiring all Muslims to condemn the founder of their community, making Pakistani citizenship all but impossible for Ahmadis. Remember the shopkeeper in Glasgow, Asad Shah, who was stabbed to death after posting a message of Easter greetings on his Facebook page? He was Ahmadi. This morning a Bradford cab driver admitted to murdering him for “disrespecting” the prophet.

The Ahmadiyya mosque in Morden, south London – a former milk factory – is the largest mosque in western Europe. They don’t broadcast the call to prayer out of respect for their neighbours, but they do have their own TV studio broadcasting worldwide. In the main worship space, dozens of little makeshift booths are constructed for the spiritual solitary confinement – called I’tikāf – that some undertake in the final days of Ramadan.

Ahmadi Muslims don’t believe that prophecy ended with Muhammad and that the promised messiah (an idea common to all Abrahamic faiths) arrived in India at the end of the 19th century. On this difference, the Ahmadis are widely considered apostates and subject to brutal persecution, something we must ensure does not take root here.

As we break the Ramadan fast over a curry, they tell me of leaflets being handed out on London campuses inciting Muslims to violence against them. They speak with anxiety of Tooting imam Suliman Gani, who begged a local halal butcher not to sell his shop to an Ahmadi. Guni, of course, hails from Sadiq Khan’s former constituency. Mayor Khan says he wants to “get out there and build bridges”. So maybe he should go and visit the Morden mosque too – it’s only a few stops down the Northern line. Eid mubarak.