The Dangerous Ideology of Religion

Ideology, in the hands of true-believers, tends to reject facts in favor of some grander “truth,” an especially dangerous tendency when mixed with religious conviction and certainty, as Lawrence Davidson explains.

Ideologies are pre-set forms of thinking that shape people’s worldviews and, supposedly, help to order and simplify reality. While this supposition is always flawed to one extent or another, ideologies can be very seductive. In part this is because they free their adherents from the hard work of critical thinking. Thus, they are often held onto tenaciously.

Because ideologies distort reality, they are particularly unsuited for those aspiring to power as well as their devoted supporters. History is full of examples of politically powerful ideologies that underscore this fact: fascism, communism, various military cults (particularly popular in South America and the Middle East) and even the ideology of democracy as manipulated by corrupt elites, who play the Pied Piper to the masses. 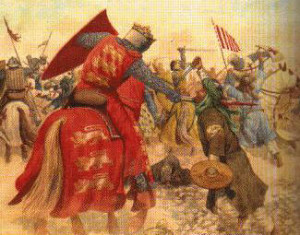 Yet there is still one more ideology out there which, even now, wreaks havoc by either claiming for itself the trappings of secular power or attaching itself in some influential advisory way to the institutions of power. That ideology is religion in its various institutional manifestations.

I want to emphasize that I am not referring to the personal religious convictions of millions by which life is made to appear understandable and meaningful. Whether such convictions are accurate or not, they play an important role at the individual level and, as long as they do not promote harmful intolerance, should be left to benignly function at the local level.

It is often said that we live in an age of religious revival. Whatever this might say for the “spiritual” shortcomings of modernity, this is a state of affairs rife with political danger. A quick look at history can again easily demonstrate why this is so.

—In the Tenth through Fifteenth centuries in Europe, Roman Catholicism was a strong political power centered in the Papacy. Historians often claim it preserved what was left of Greco-Roman civilization. It also brought with it the bloodletting of the Crusades and the tortures of the Inquisition.

—When, briefly, the Protestants tasted political power in the form of Calvin’s Geneva, Savonarola’s Florence, Cromwell’s England, and the early New World establishments of North America, the result was widespread intolerance, civil war, burning flesh at Salem and elsewhere and, of course, no dancing. It does not take great imagination to see the potential for high levels of intolerance occurring if some representative of today’s Christian Right, say Ted Cruz, takes power in the U.S.

—Buddhism used to be universally revered as a religion of peace and tolerance. However, put it in power or ally it to those who politically rule, and what once was benign turns malignant. Thus, consider the self-identified Buddhist government of Sri Lanka and its brutal campaign against the Tamils in the north of that country. Likewise, you can find Buddhists allied to the government of Myanmar crying for the blood of the country’s Rohingya, a Muslim minority.

—There is a lot of Hindu fanaticism in India, and It remains to be seen if the present government of that country, dominated now by Hindu nationalists, will again turn loose the religious passion which, in the recent past, has led to sectarian violence and massacres of India’s religious minorities (again, notably Muslims).

—Where the Muslims seek or hold state power, the situation is little different. According to Sunni tradition, the ethical standards of behavior set down in the Quran did not dictate state behavior beyond the brief reign of the so-called “rightly guided Caliphs.” Shiites often point out that things fell apart almost immediately upon Mohammad’s death. Civil war and internecine slaughter followed in both scenarios.

Today, in Saudi Arabia and most of the Gulf emirates, one finds Sunni intolerance of Shiite Islam and the exploitation of non-citizen laborers despite their being fellow Muslims. In Shia Iran, authorities seem unsure just how tolerant or intolerant to be toward more moderate interpretations of their own, now politicized, religious tenets.

Then, of course, you have various organizations, claiming to be Sunni Muslim, ranging from ISIS to Al Nusra or some other Al Qaeda variant, all reaching for political power. Where they have tasted success, as in the case of ISIS, the consequences have been particularly bad.

—Since 1948 Judaism has succumbed to the same fate as other world religions entangling themselves in politics. Despite all the rationalizations, propaganda and self-deception, it is clear that institutional Judaism is now firmly melded to the deeply discriminatory and particularly brutal political ideology of Zionism.

I use the word “melded” because what we have here is something more than just an alliance of two separate entities. The Zionists have insisted since 1917, the year of the Balfour Declaration, was proclaimed, that the fate of Judaism and an Israeli “national home” are thoroughly intertwined. Their insistent manipulations have resulted in a self-fulfilling prophecy.

The consequences of this melding have been horrific. If you want to know just how horrid things have become, there are numerous Palestinian and Jewish human rights groups that are easily found on the web which will document Israeli behavior in all its dehumanizing detail.

For a more personalized assessment of just what this melding means for Judaism as a religion I recommend the recent book by Marc H. Ellis entitled The Heartbeat of the Prophetic (New Diaspora Books, 2015). Ellis is a Jewish theologian who, in the 1970s, was greatly influenced by the work of Roman Catholic priests in Latin America who were promoting “liberation theology.”

That “for the good of the people” interpretation of religion was corrosive of the institutionalized Church, and so the movement was ultimately stifled. However, Ellis thought that the same philosophy could be applied to Judaism – an insight that eventually led him to denounce Zionized Judaism in a manner reminiscent of the prophets of the Old Testament.