Just over half of practising solicitors are women, but they are still under-represented in senior roles 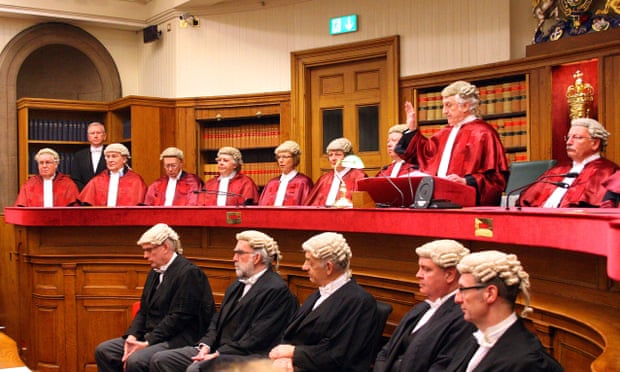 Senior judges at the Court of Session in Edinburgh. There has been a sharp increase in the number of women qualifying as lawyers. Photograph: Getty Images

Scotland now has more female than male solicitors for the first time, after a sharp increase in the number of women qualifying as lawyers.

The Law Society of Scotland (LSS) said that 51% of the more than 11,000 practising solicitors are now women, with most employed as in-house lawyers for private and public sector organisations rather than in private practice.

The society said the trend – which is being followed in England and Wales, where 48% of solicitors are now women – would continue and spread to higher reaches of the industry as older male lawyers retired.

Women are still under-represented at senior roles, particularly in private firms. In England and Wales, only 25% of partners, the senior figures who often run law firms, are women.

Nearly two-thirds of practising lawyers in Scotland under 40 were now women, compared with only 40% of those over 40, while 64% of those admitted to the legal profession this year were women.
The society later confirmed that there was also significant under-representation of women working as solicitor-advocates – a class of specialist courtroom lawyer able to lead on cases in all Scottish courts, without having the full qualifications or status as advocates, the Scottish version of the barrister.

It said only 25% of Scotland’s 334 solicitor advocates are women – a figure that mirrors the minority of women working as advocates – 27% of the total, and the small minority serving as judges. There are only 125 women working as advocates (who represent clients in the higher courts) out of 462 people who are members of the Faculty of Advocates. Of Scotland’s 113 Queen’s counsel, the most senior and highest paid rank of advocate, only 21 are female.

There are only nine female judges in Scotland, out of 31 judges in post, and no woman has served in the most senior posts of lord president or lord justice clerk. There are only 29 female sheriffs, out of 133 in post, with only two out of six sheriff principals women.

The most senior female judge is Lady Smith, who is president of Scottish tribunals, which adjudicate in areas such as mental health law or private rental housing.

Christine McLintock, president of the LSS, said private legal firms had to address the relative male domination of senior posts, which could take years to change through natural wastage. They needed to consider flexible working, particularly in the most challenging, competitive parts of the industry.

“What is clear is that employers have to take notice of the increasing numbers of young, ambitious women choosing to enter the legal profession and plan accordingly to avoid losing talented individuals from their business,” McLintock said.

“I have no doubt that we will continue to see women in the profession rise to the top, but given the results of our own and others’ research, it’s likely to be many years before we see any kind of equality in terms of the numbers of women in the most senior roles.”

But the new figures also raised questions about why fewer men than before saw law as a good career, she added.

“It’s important that we understand the changing profile of the legal profession, which includes looking at the reasons why more woman are choosing a career in law and why men currently appear to be less attracted to joining the legal profession, to ensure we can encourage and support best practice at all stages of a solicitor’s career.”
Most senior judges and top QCs still privately educated, figures show
Read more
Sources from the legal profession say the problem with under-representation of women among advocates is a question for the wider legal community.

Unlike the Law Society or judiciary, where a ruling body can change policies, recruitment strategies or training procedures to address inequalities, advocates are self-employed and independent, the Faculty of Advocates does not have the same powers or central authority as the LSS or Judicial Office for Scotland to influence or control recruitment policy.

James Wolffe, QC, dean of the Faculty of Advocates, said he was pleased to see the latest LSS statistics, since most advocates began work as solicitors. The faculty was committed to equality of opportunity, he said. “More women are practising advocacy than ever before, and, with the changing demographic in the solicitors’ profession, I expect that trend to continue,” he added.