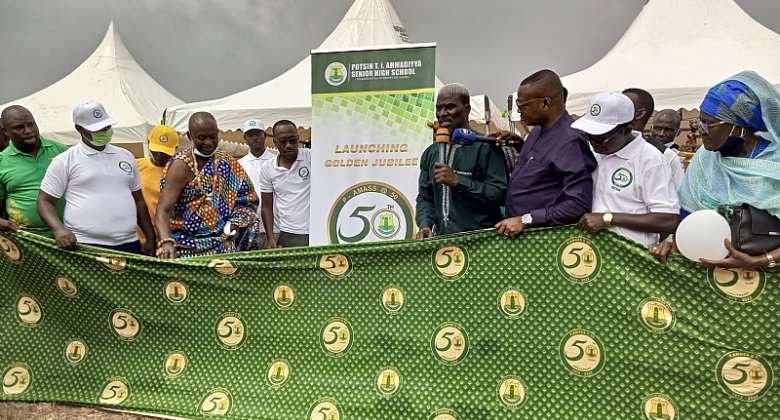 Potsin T.I Ahmadiyya Senior High School (SHS) has launched its golden jubilee anniversary celebrations to generate awareness among stakeholders and to raise funds for the event scheduled to take place later this year.

The anniversary which is on the theme “50 years of Educational Excellence: Potsin T.I Ahmadiyya SHS in retrospective” has been slated for Saturday, October 1, 2022.

Birthed in 1972 by the Ahmadiyya Muslim Mission Ghana under its Nusrat-Jahan (Service to humanity) Scheme, the school is anchored on the cardinal principles of discipline, morality and nobility in character.

It was commissioned as a humble institution with a student population of thirteen boys and a girl, with only four teachers, including the headmaster.

Speaking at the launch, Mr. Solomon Darko-Quarm, District Chief Executive (DCE) for Gomoa East and an old student of the school narrated the “Potsin T.I AMASS” story and paid a glowing tribute to its founding fathers for sacrificing their all to establish the school.

He recounted some of the challenges in the early days of the school which were lack of electricity, water and dormitory which according to him, made life unbearable for teachers and students.

He also recalled that earlier, students had to walk a distance of five kilometres to river Ayensu to fetch water before reporting for classes.

Notwithstanding these challenges, Mr Darko-Quarm stated that pioneer students and those in the early days of the school were able to achieve academic excellence with determination and hard work.

He mentioned that Potsin T.I AMASS had since its establishment achieved numerous successes and made tremendous contributions to national development, with some alumni continuing to excel in various fields of endeavour, both home and abroad.

In that regard, he encouraged the present students who he said had almost everything at their disposal to learn hard saying “you have no excuse to fail if we were able to do it even in those hard times”.

Mr. Desmond De-Graft Otoo, Member of Parliament (MP) for Gomoa East called on students, teachers, parents, old students and all and sundry who were connected to the school to emulate the sacrifices of the founding fathers to take the school to a higher height.

“We have been told the school has gone through hard times, so must do everything we can to support what our forefathers sacrificed and toiled to leave it for us”, the MP said.

He mentioned that the collective efforts of all stakeholders would continue to spur the school to reach another enviable pedestal.

Mr. De-Graft Otoo pledged his unflinching support to the school and said he would ensure that the school stood out tall in all endeavors.

Mr. Samuel Saakwa, a Chartered Accountant and also an old student who chaired the event, appealed to all old students to actively participate in the school’s activities and contribute their quota towards its progress and development.

“Whatever that you have become today, remember that you had your foundation from Potsin T.I Ahmadiyya. So, show that you love your school by supporting its development”, he stressed.

Madam Zainab Adams, Headmistress of the school said as part of the celebration, students would engage in activities such as quizzes, debates, sporting activities, float and health screening.

Others would be communal labour, awards night, cultural display, variety show, talk Show and Symposium, the Student Parliament among other interesting activities.

She paid tribute to successive headmasters and lauded the collaborative effort of old students and stakeholders towards the development of the school.

Alhaji Ahmad Suleman Anderson, Chairman of Board of Governors and Deputy Ameer III of the Ahmadiyya Muslim Mission, Ghana was excited and said, he became associated with the school long ago and had since witnessed the school chocked numerous successes.