The first-ever digital unwrapping of a mummy, which was conducted on ancient Egyptian King Amenhotep I, has revealed for the first time the king’s facial features as well as details related to his mummification process and 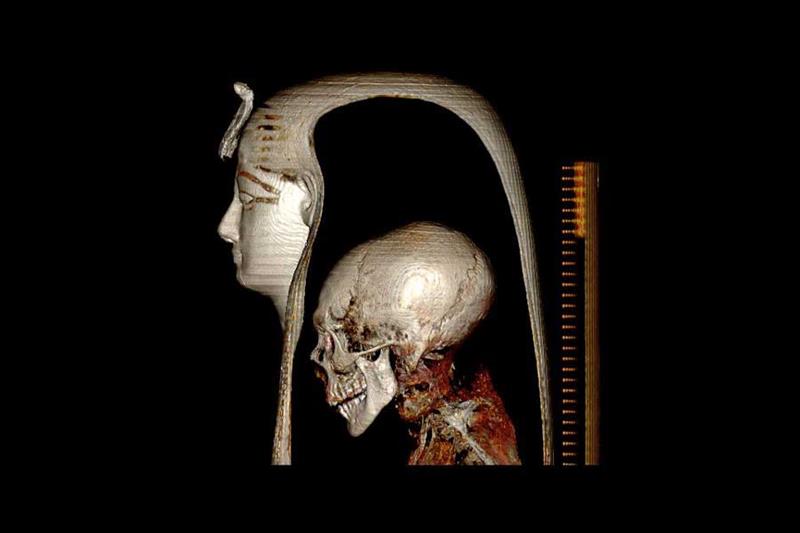 The digital unwrapping was part of a scientific study published in the Frontiers in Medicine scientific journal and conducted by renowned Egyptologist Zahi Hawass and Cairo University radiology professor Sahar Saleem, who is also an international expert in the radiology of antiquities, the antiquities ministry said in a statement on Tuesday.

Using modern technologies, Saleem was able to digitally unwrap the mummy, which was hidden under its intact wrappings and funeral mask, without physically touching it, the statement said.

The study, which involved the use of x-ray technology and CT scanning, revealed for the first time King Amenhotep I’s facial features, his age, the state of his health at the time of death, and other details related to his mummification and reburial.

King Amenhotep I was the son of King Ahmose I, conqueror of the Hyksos and founder of the New Kingdom of ancient Egypt.

The mummy of King Amenhotep I was discovered in 1881 in the royal cache at Deir-El Bahri in Luxor, where the priests of the 21st dynasty reburied the mummies of many previous kings and queens to protect them from tomb theft.

Hawass said that the facial features of King Amenhotep bear a resemblance to those of his father Ahmose I, and that the scan also revealed that Amenhotep died at the age of 35.

The scan also suggested that he did not die of disease or injury, and revealed details about the embalming and mummification process.

The Osiris position, with forearms crossed over the body, began with King Amenhotep I, according to the study, as the position has never been seen in the mummies of kings that preceded him.

The brain was also not removed during the mummification process, unlike with most kings of the New Kingdom, including Tutankhamun and Ramses II.

The detailed three-dimensional radiographs showed the presence of 30 amulets inside the mummy, as well as a belt under the body made up of 34 gold beads.

King Amenhotep I made the news in April as part of the Pharaohs Golden Parade, which saw the transfer of royal mummies from the Egyptian Museum in Downtown Tahrir to the National Museum of Egyptian Civilisation in Fustat in Cairo.