Hundreds queue for passports in bid to leave Afghanistan 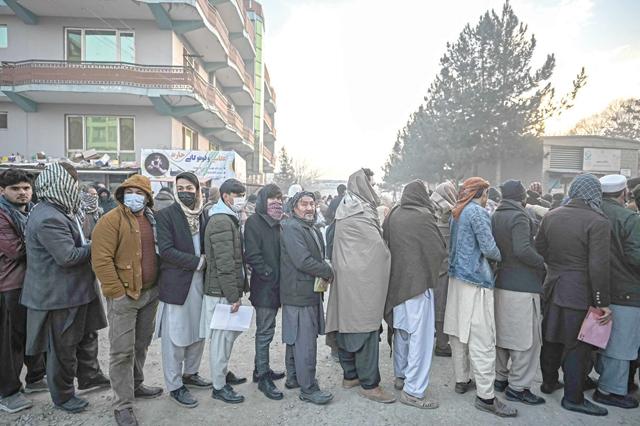 People queue to enter the passport office at a checkpoint in Kabul on Saturday, after Afghanistan’s Taliban authorities said they will resume issuing passports (AFP photo)

KABUL — Hundreds of people braved sub-zero temperatures in Afghanistan’s capital to queue outside the passport office early Sunday, a day after the Taliban government announced it would resume issuing travel documents.

Many began their wait the previous night and most stood patiently in single file — some desperate to leave the country for medical treatment, others to escape the Islamists’ renewed rule.

Tense Taliban personnel periodically charged crowds that formed at the front of the queue and at a nearby roadblock.

“We don’t want any suicide attack or explosion to happen,” said Taliban security operative Ajmal Toofan, 22, expressing concerns about the dangers of crowding.

The local branch of the Daesh group, the Taliban’s principal enemy, killed more than 150 people in late August when citizens massed at Kabul airport in a desperate bid to leave during the early days of the new regime.

“Our responsibility here is to protect people,” Toofan added calmly, his gun pointed professionally towards the ground. “But the people are not cooperating.”

He spoke to AFP as one of his colleagues pushed a man who then fell headlong just short of a coil of barbed wire.

Mohammed Osman Akbari, 60, said he was urgently trying to reach Pakistan, because dilapidated hospitals at home were unable to complete his heart surgery.

Medics “put springs in my heart”, he said, referring to a stent. “They need to be removed and it’s not possible here.”

Nearby, ambulances containing people too sick to queue were parked at the side of the road.

“The patient has a heart problem,” said ambulance driver Muslim Fakhri, 21, referring to a 43-year-old man lying on a stretcher inside his vehicle.

An applicant has to be present to ensure the passport is issued, he explained.

The Taliban initially stopped issuing passports shortly after their return to power, which came as the previous, Western-backed regime imploded in the final stages of a US military withdrawal.

In October, authorities reopened the passport office in Kabul only to suspend work days later as a flood of applications caused the biometric equipment to break down.

But the office said Saturday that the issue has been resolved and those whose applications were already in process can now get their documents.

Mursal Rasooli, 26, said she was happy to hear the news.

“The situation here is not peaceful,” she told AFP, hugging her two-year-old daughter Bibi Hawa close for dual relief against the biting cold.

“If the situation gets worse than this, then we have the passport” and can flee, she said.

Her husband is in Iran because he could not find work here, she added, before expressing concern about skyrocketing prices and a lack of jobs and education for women and girls.

Issuing passports — and allowing people to leave amid a humanitarian crisis the UN has called an “avalanche of hunger” — is seen as a test of the Taliban’s commitment to the international community.

The Taliban are meanwhile pressing donors to restore billions of dollars in aid that was suspended when they came to power.

For “months now, since the Taliban came [to power], we’ve had no work”, he said.

“The artists are most vulnerable, but no one cares.”