Pope Francis arrived on the divided island of Cyprus on Thursday as part of a landmark trip to push two of his priorities: the plight of migrants and inter-confessional dialogue. 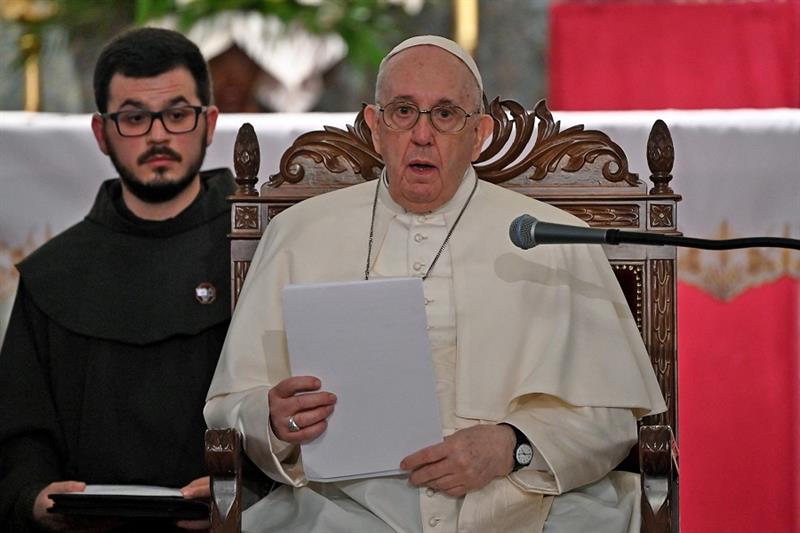 Pope Francis addresses a meeting at the Maronite Lady of Grace cathedral in Nicosia s walled Old City with priests and members of the Maronite Christian community on the first stop in his visit to the predominantly Greek-Orthodox divided east Mediterranean island of Cyprus on December 2, 2021.

The pontiff, 84, landed at Larnaca airport on the Mediterranean island where he will stay until travelling early Saturday to Greece, another front in Europe’s migrant and refugee crisis.

Francis is the second Catholic pontiff to set foot on Cyprus, which has a Greek Orthodox majority, after Benedict XVI visited in 2010.

Migration is a key theme of his visit to the country, which complains of bearing a disproportionate burden of the flow of people trying to reach the European Union.

Ahead of his visit, the pope said the wider five-day trip was an “opportunity to approach a humanity wounded”, noting there were “so many migrants in search of hope”.

He also said his trip would “be a journey to the wellsprings of apostolic faith and fraternity among Christians of various denominations”.

On the plane, the pope greeted journalists, one of whom gave him framed fabric pieces of migrant tents from the French port of Calais with the message: “To all the exiled people who died on the Franco-British border.”

Before his departure from Rome, the pope had met refugees from Syria, Congo, Somalia and Afghanistan who had come via the Greek island of Lesbos and now live in Italy, the Vatican said.

The Cyprus visit will culminate in a mass at an open-air football stadium in Nicosia, eagerly awaited by the estimated 25,000 Catholics in a country of about one million people.

They include thousands of Maronites whose ancestors arrived from Syria and Lebanon, but most are overseas workers from the Philippines and South Asia, along with African migrants.

More than 500 Cypriot police are on duty to secure the visit.

Francis will on Friday hold an ecumenical prayer with migrants at a Nicosia church which serves worshippers from dozens of nations near the UN-patrolled “Green Line” that divides the island.

According to Cypriot authorities, negotiations were underway with the Vatican to organise the transfer to Rome of several migrant families currently in Cyprus.

That would repeat a gesture which Francis made on Greece’s Lesbos in 2016 when he returned to the Vatican with three Syrian Muslim families who had fled bombing in their homeland.

In a video message ahead of the trip, Francis described the Mediterranean as a “huge cemetery”, referring to the thousands who have died attempting to reach European shores to escape conflict and poverty.

“We know that Pope Francis goes above all to the most vulnerable and marginalised,” the Maronite archbishop of Cyprus, Selim Sfeir, told AFP.

Cypriot authorities say the island has the highest number of first-time asylum applications among all 27 EU members relative to its population. They accuse Turkey of allowing migrants to cross from the north.

Cyprus has been divided since 1974 when Turkish forces invaded and occupied the island’s northern third in response to a coup sponsored by the Greek junta in power at the time.

Only Ankara recognises the self-proclaimed Turkish Republic of Northern Cyprus.

The division saw about 200,000 people, including many Maronites from the north, displaced from their homes.

UN-sponsored negotiations seeking to reunify the island have been suspended since 2017.

‘I want to see Papa’

In visiting the Orthodox countries of Greece and Cyprus “the (pope’s) message surely is about dialogue”, Latin Patriarchal Vicar for Cyprus Jerzy Kraj told AFP.

The Orthodox Church has been separated from the Catholic Church since the schism of 1054 between Rome and Constantinople, today’s Istanbul.

On Friday morning, Francis will meet the Orthodox bishops of Cyprus at the Archbishop’s Palace in Nicosia’s Old City, following a meeting Thursday evening with President Nicos Anastasiades.

Anastasiades will propose his country’s vision for “a just and viable solution to the Cyprus problem”, an official statement said.

A Vatican source said the pontiff is expected to deliver “a plea for unity and peace” in Cyprus.

The pope’s first stop after landing Thursday will be the Maronite Cathedral of Our Lady of Grace in Nicosia.

There, he will meet the Maronite Patriarch Bechara al-Rahi who is travelling from nearby Lebanon, a country mired in political and economic turmoil.

About 1,000 other Lebanese have also arrived in Cyprus for the papal visit, officials in the Maronite Church said.

Eroula Pavlido, 80, a Greek Orthodox Cypriot, said she was looking forward to seeing the pope in Nicosia.

“My granddaughter said, ‘I want to see Papa’,” the pope, she said, laughing. “It’s not so usual (for the pope) to come to Cyprus. (It’s a) small country and it’s divided — so many problems.”