Deathly Silence: Journalists Who Mocked Assange Have Nothing to Say About CIA Plans to Kill Him 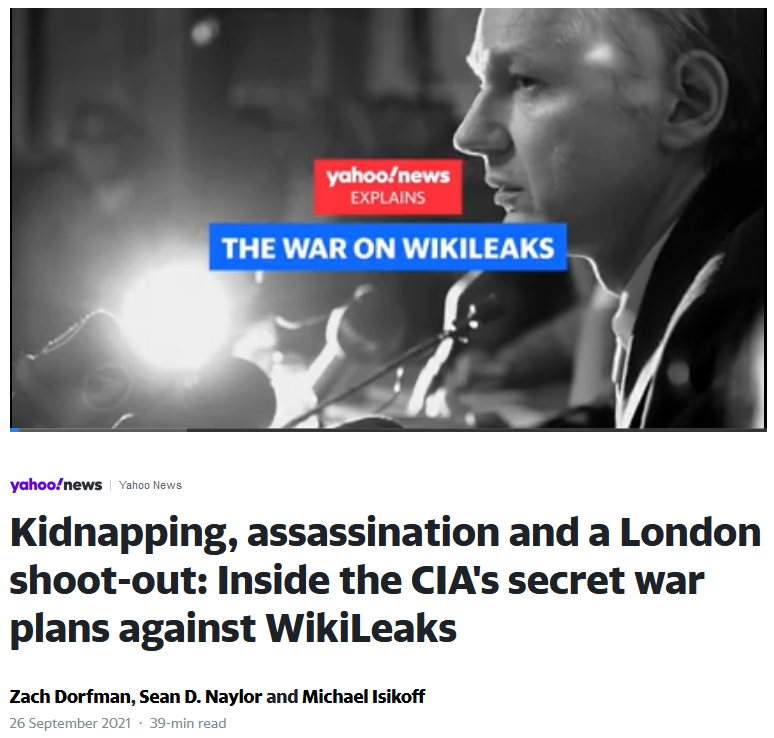 Yahoo! News (9/26/21) reported that “discussions over kidnapping or killing Assange occurred ‘at the highest levels’ of the Trump administration.”

Yahoo! News (9/26/21) published a bombshell report detailing the US Central Intelligence Agency’s “secret war plans against WikiLeaks,” including clandestine plots to kill or kidnap publisher Julian Assange while he took refuge in the Ecuadorian embassy in London.

Following WikiLeaks‘ publication of the Vault 7 files in 2017—the largest leak in CIA history, which exposed how US and UK intelligence agencies could hack into household devices—the US government designated WikiLeaks as a “non-state hostile intelligence service” (The Hill, 4/13/17), providing legal cover to target the organization as if it were an adversarial spy agency.

Within this context, the Donald Trump administration reportedly requested “sketches” or “options” for how to kill Assange, according to the Yahoo! expose (written by Zach Dorfman, Sean D. Naylor and Michael Isikoff), while the CIA drew up plans to kidnap him. (Assange was expelled from the embassy in 2019 and has since then been in British prison, fighting a demand that he be extradited to the US to face charges of espionage—FAIR.org, 11/13/20.)

Shortly after publication, former CIA director Mike Pompeo (Yahoo! News, 9/29/21) seemed to confirm the report’s findings, declaring that the former US intelligence officials who spoke with Yahoo! “should all be prosecuted for speaking about classified activity inside the CIA.” 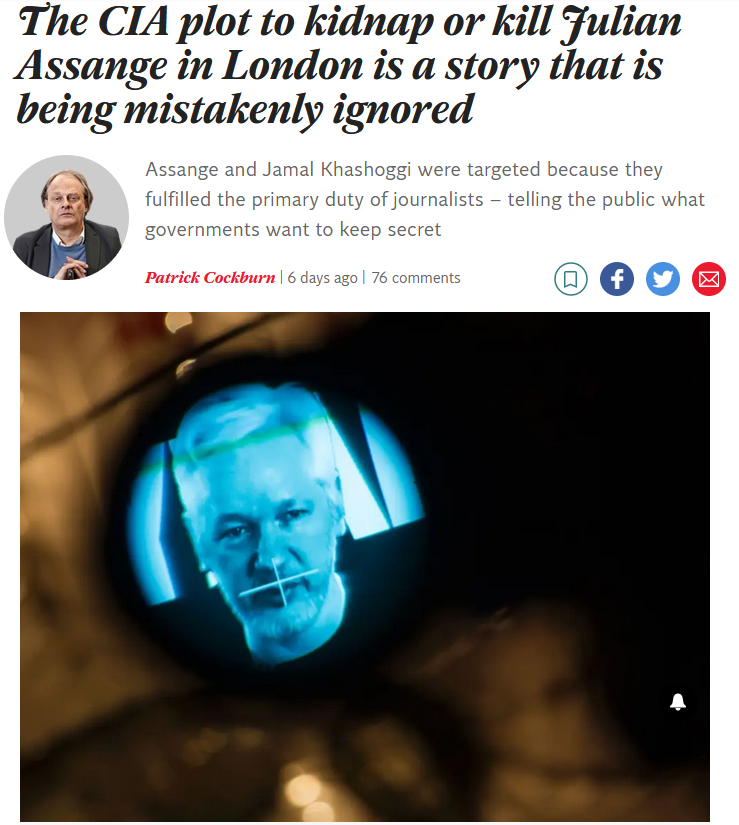 Patrick Cockburn (Independent, 10/1/21): “The scoop about the CIA’s plot to kidnap or kill Assange has been largely ignored or downplayed.”

It would seem that covert plans for the state-sanctioned murder on British soil of an award-winning journalist should attract sustained, wall-to-wall media coverage.

The news, however, has been met by Western establishment media with ghoulish indifference—a damning indictment of an industry that feverishly condemns attacks on press freedom in Official Enemy states.

BBC News, one of the most-read news outlets in the world, appears to have covered the story just once—in the Somali-language section of the BBC website (Media Lens on Twitter, 9/30/21).

Neither the New York Times or Washington Post, two of the world’s leading corporate news organizations, have published any articles about Assange since July 2021.

To its credit, since the story first broke on September 26, the Guardian has reported twice on the CIA-led conspiracy to kill or kidnap Assange. But to offer perspective, during the week after Russian opposition figure Alexei Navalny was reported to have been poisoned by the Russian government, the Guardian published 16 separate pieces on the issue, including video reports and opinion pieces.

Similarly, a Nexis search of British newspapers for the word “Navalny” brings up 288 results from August 20–25, 2020. The same search for “Assange” between September 26–October 1, 2021, brings up a meager 29 results—one of which, a notable exception, was a Patrick Cockburn piece in the Independent (10/1/21). 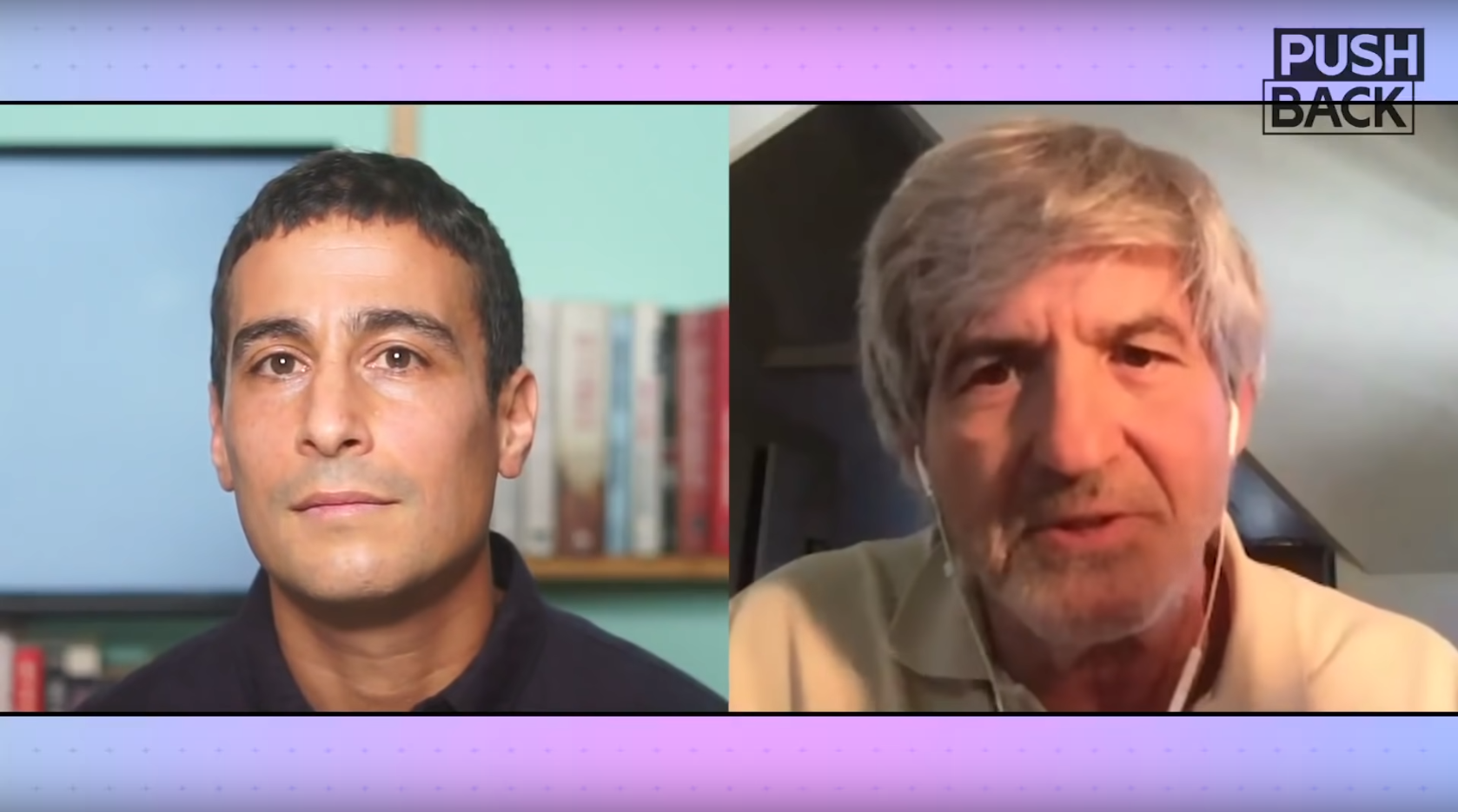 As is typical of stories that embarrass the Western intelligence services, independent media provided crucial relief to the backdrop of chilling indifference, with the Grayzone’s Aaron Maté (YouTube, 9/30/21) conducting a rigorous interview with one of the report’s authors, Michael Isikoff.

Indeed, the Grayzone (5/14/20) was the first outlet to provide evidence of a CIA-linked proposal to “kidnap or poison Assange” in May 2020. The story, however, was almost universally ignored, suggesting that, as Joe Lauria wrote in Consortium News (10/2/21), “until something appears in the mainstream media, it didn’t happen.”

One thing the corporate media cannot be accused of with regards to Assange, however, is inconsistency. After a key witness in the Department of Justice’s case against the publisher admitted to providing the US prosecution with false testimony, a detail that should ordinarily turn a case to dust, the corporate media responded by ignoring the story almost entirely. As Alan MacLeod wrote for FAIR.org (7/2/21):

The complete uniformity with which corporate media have treated this latest bombshell news raises even more concerns about how fundamentally intertwined and aligned they are with the interests of the US government.

Even after it was revealed that the UC Global security firm that targeted Assange had also spied on journalists at the Washington Post and New York Times, neither outlet mounted any protest (Grayzone, 9/18/20).

The prevailing silence has extended into the NGO industry. Amnesty International, which refused in 2019 to consider Assange a prisoner of conscience, has said nothing about the latest revelations. Likewise, Index on Censorship, which describes itself as “The Global Voice of Free Expression,” hasn’t responded to the story.

‘Only barrier is pride’ 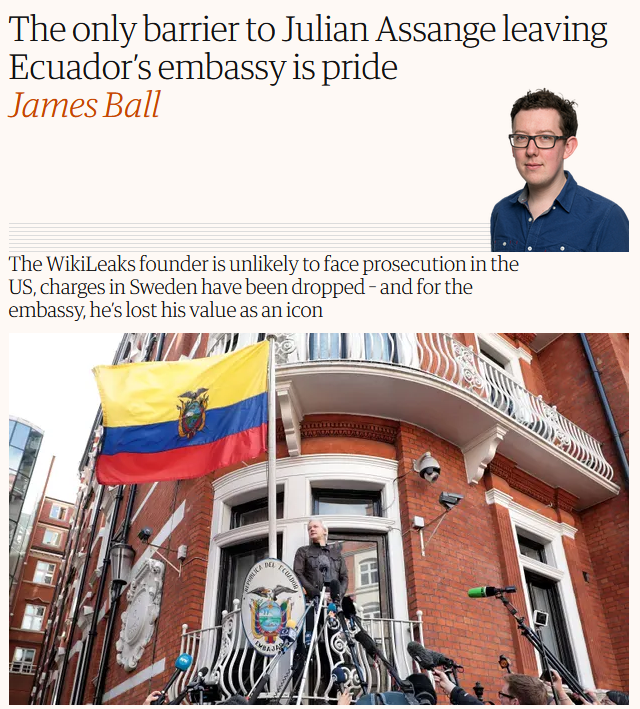 The present circumstances become even more deplorable upon consideration of the corporate journalists who arrogantly diminished, or even delighted in, Assange’s concerns for his own safety.

The Guardian’s James Ball (1/10/18) published a now infamous article headlined, “The Only Barrier to Julian Assange Leaving Ecuador’s Embassy Is Pride.” “The WikiLeaks founder is unlikely to face prosecution in the US,” the subhead confidently asserted. The column concluded:

Assange does not want to be trapped in Ecuador’s embassy, and his hosts do not want him there. Their problem is that what’s keeping him trapped there is not so much the iniquitous actions of world powers, but pride.

In a later article (3/29/18), Ball insisted that Assange “should hold his hands up and leave the embassy.”

Ball, at least, has written something on the latest revelations, but his article in the London Times (10/03/21) remains typically scornful of Assange’s persona.

The Guardian’s Marina Hyde (5/19/17) took a similar angle. Under the headline “The Moral of the Assange Story? Wait Long Enough, and Bad Stuff Goes Away,” Hyde wrote that “Captain WikiLeaks will get out of pretend-jail eventually.” More than four years later, Assange is in Belmarsh prison, “the closest comparison in the United Kingdom to Guantánamo,” according to the House of Commons Foreign Affairs Committee. Hyde has said nothing of the very real plans to murder or kidnap him.

In the same vein, journalist Suzanne Moore—who had previously publicly mocked Assange on a number of occasions—wrote in the New Statesman (4/12/19) after Assange’s arrest:

We are all bored out of our minds with Brexit when a demented-looking gnome is pulled out of the Ecuadorian embassy by the secret police of the deep state. Or “the met,” as normal people call them.

Moore, winner of the Orwell Prize for journalism in 2019, was not the first of her colleagues to ridicule WikiLeaks and its supporters as paranoid about an increasingly powerful state security apparatus. A column by the Guardian‘s Nick Cohen (6/23/12)  offered “supporters of Julian Assange” as a “definition of paranoia”:

Assange’s supporters do not tell us how the Americans could prosecute the incontinent leaker. American democracy is guilty of many crimes and corruptions. But the First Amendment to the US constitution is the finest defense of freedom of speech yet written. The American Civil Liberties Union thinks it would be unconstitutional for a judge to punish Assange.

And, in any case, “Britain has a notoriously lax extradition treaty with the United States.” 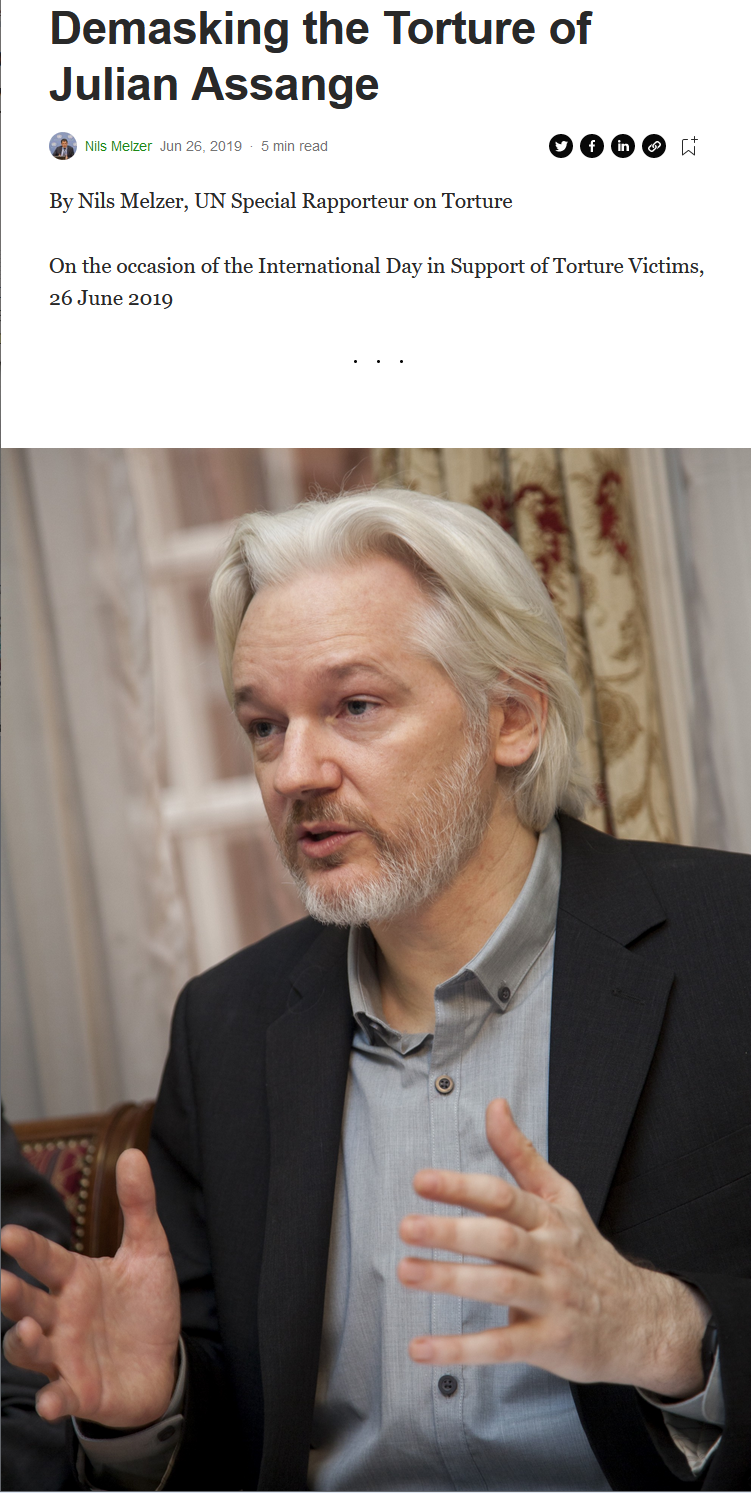 Nils Melzer (Medium, 6/26/19): “Once telling the truth has become a crime, while the powerful enjoy impunity, it will be too late to correct the course.”

It is of little surprise, then, that the Guardian, among other news outlets, refused to publish the words of UN special rapporteur on torture Nils Melzer, who wrote in June 2019:

In the end, it finally dawned on me that I had been blinded by propaganda, and that Assange had been systematically slandered to divert attention from the crimes he exposed. Once he had been dehumanized through isolation, ridicule and shame, just like the witches we used to burn at the stake, it was easy to deprive him of his most fundamental rights without provoking public outrage worldwide.

The Assange case once again demonstrates that when erroneous reporting falls on the right side of the US and UK foreign policy establishment, editorial standards are set aside, and journalistic failures are met with zero accountability.

As such, it’s important to remember those journalists who watched on, pointing, laughing, comfortable in the knowledge that their work would never produce the impact nor risk of WikiLeaks—and then said nothing as the right to a free press was removed in broad daylight.