The key to Bhutan’s happiness

By Stephanie Zubiri21st September 2021As the Kingdom of Bhutan opens its borders, a Buddhist monk shares his secrets for understanding the nation’s unique approach to happiness.

“Happiness is the concern of everyone,” said His Eminence Khedrupchen Rinpoche. “Whether or not you acknowledge it, this is the purpose of every human being.”

The Fifth Reincarnate and head of the Sangchen Ogyen Tsuklag Monastery in Trongsa, Bhutan, Rinpoche knows all about the pursuit of happiness. Ascending to his position at the age of 19 in 2009, he was one of the youngest ever Rinpoches (spiritual master) in Bhutan at the time. Now 31, he has dedicated the last 12 years of his life to teaching the world about Buddhist principles and how they can be applied to make life happier every day, regardless of one’s culture or religion. 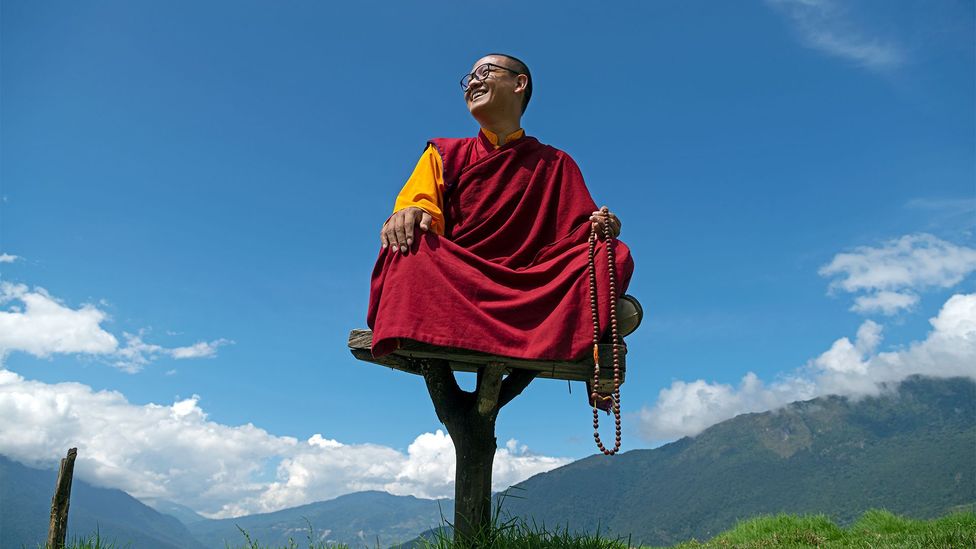 Rinpoche was Bhutan’s youngest ever spiritual master when he assumed the position in 2009 (Credit: Scott A Woodward)

Sandwiched between the economic and political powerhouses of China and India, with a population of just more than 760,000, the Kingdom of Bhutan is known around the globe for its unconventional measure of national development: Gross National Happiness (GNH). The concept was implemented in 1972 by the Fourth King of Bhutan, Jigme Singye Wangchuck. Eschewing traditional economic quantifications, Bhutan assesses its country’s overall wellbeing on the basis of sustainable and equitable socio-economic development; environmental conservation; preservation and promotion of culture; and good governance.ADVERTISEMENT

“Gross National Happiness is [a] set of collective conditions; one that [is] generally needed to live a good life,” said Rinpoche.

Before the pandemic, Rinpoche journeyed around the world giving lectures and workshops through his Neykor Initiative. He was also working to build the first Buddhist Academy in Bhutan that will be open to anyone interested in learning about Buddhist philosophy, regardless of background or religion.

“Everything I was doing was put on hold. I decided to see this as an opportunity to deepen my own experience and isolate myself,” Rinpoche said. “I went to the mountains and lived there with very little food, in harsh weather conditions, with no shelter but a cave. It gave me the time to truly imbibe my own teachings. What became very clear was that true happiness has nothing to do with external phenomena; it is innate.” 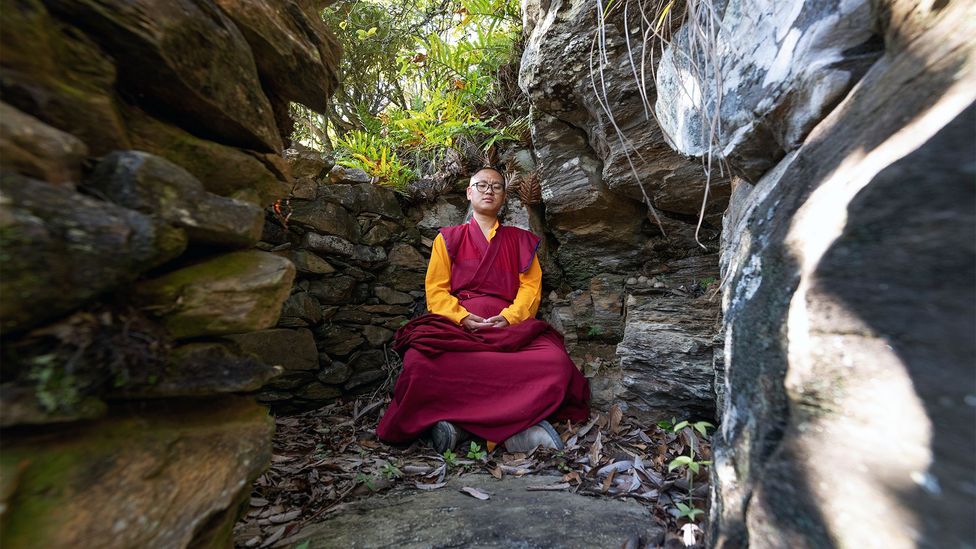 Rinpoche frequently visits his personal meditation cave in the forested hills behind the Sangchen Ogyen Tsuklag Monastery in Trongsa (Credit: Scott A Woodward)

Of course, Rinpoche stressed that one does not need to go to such extremes to find peace: “We must stop searching for happiness in experiences outside ourselves. There are, in my opinion, four pillars: loving kindness, compassion, non-attachment and karma, that can be easily embraced by any one at any point in their lives, from anywhere.”

According to Rinpoche, loving kindness “is the key to generating happiness not just on a personal level, but for others as well.” He stressed the importance of being kind to yourself first and how this leads to compassion to others. “You must love yourself and truly know, that no matter the circumstance, you are good enough. From there, you can spread that [compassion] to others.”

You may also be interested in:
• Bhutan’s 350-year-old recipe for wellbeing
• Japan’s mountain ascetic hermits
• Where Buddha was born

Chunjur Dozi, a former tour guide, believes that Bhutan’s sense of collective compassion is rooted in religion. “We have a strong communal sense of helping others, which comes from most of the population being Buddhist. I always consider if what I do will benefit the community.”

After no longer being able to work as a guide during the pandemic, Dozi reevaluated his perspective and returned to his village of Tekizampa in May of 2020. “The most difficult for me was coping with losing a job that I thought was secure,” he said, “However, I was not without any alternatives. I was able to go back to my village and return to the earth, farming and selling produce.” He has since used his experience as a tour guide to engage his peers in finding ways to promote local culture to tourists now that the Kingdom has reopened its borders. “I encouraged people to elaborate our homegrown recipes with red rice to make it as authentic as possible so people can learn about our local cuisine,” he said. 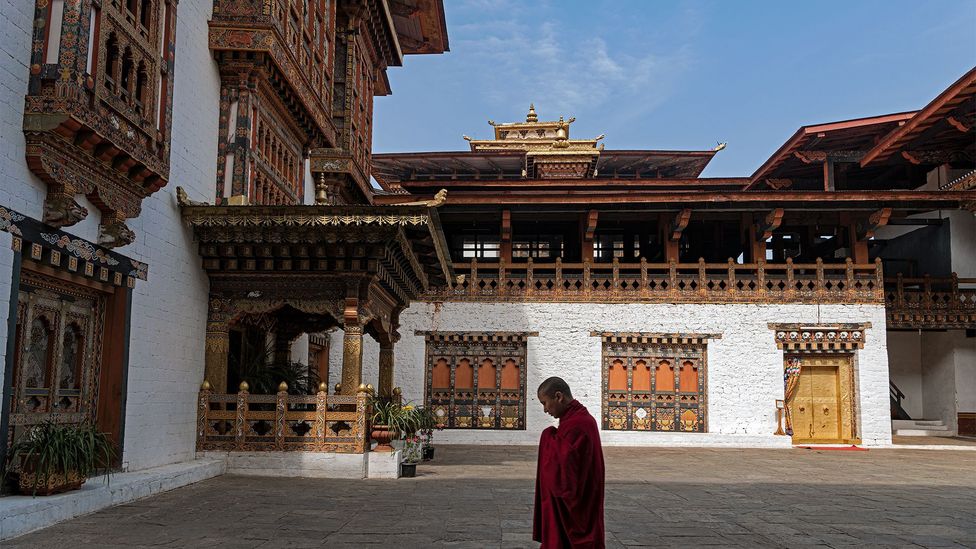 Accepting that all things are impermanent is one of Rinpoche’s pillars of happiness (Credit: Scott A Woodward)

Rinpoche’s third pillar, non-attachment or impermanence, is a Buddhist concept that is at the root of Bhutanese culture. “When something goes wrong, don’t become depressed immediately because things will change,” Rinpoche said. “If we accept that all things are impermanent, then that means there can be change, and with change there is hope.” Rinpoche explained that this also holds true for the positive things in life. “Accepting that things don’t last, including success and wealth, allows you to truly appreciate what you have at hand.”

In addition to embracing self-kindness and living compassionately towards others, the pandemic has also reinforced the importance of welcoming change to Dozi. Since returning to his village, he has learned carpentry and has been helping his neighbours repair their homes while embarking on a big communal project. “We renovated a traditional farmhouse that was abandoned by a family and transformed it into a farm stay. I have been advocating a long time for a more immersive approach to tourism and for people to explore the culture and lifestyle of the more rural areas of Bhutan. At the end of the day, I learned to be happy with what I have and make the best of it.”

According to Rinpoche, the fourth pillar, karma, isn’t what it seems.

“Karma is totally misunderstood. Most people think it means that if you do something bad, then something bad will happen to you, like a form of universal revenge or punishment. It isn’t that at all. It is about cause, condition and effect. Accepting that your actions and choices have an impact on the world around you. It is like planting a seed of a tree. If we plant a mango seed, we get a mango tree. We can’t plant an apple seed and expect a mango tree to grow!” he chuckled. “Believing in karma is an opportunity for you to transform yourself, to shape yourself, to really work on who you want to become and do what you want to achieve.” 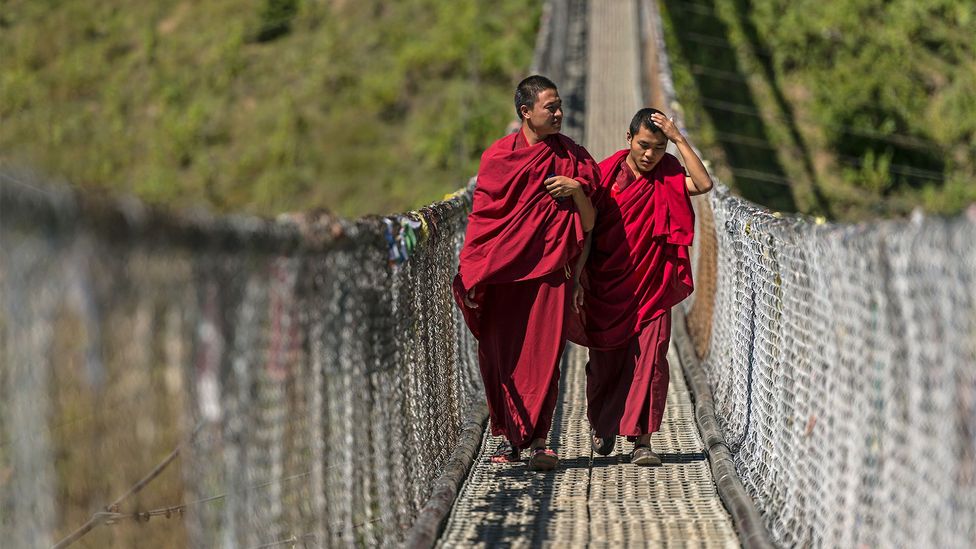 To find happiness, Rinpoche says we must accept that our actions have an impact on those around us (Credit: Scott A Woodward)

Though Rinpoche asserts that Bhutan is “incredibly peaceful and has this majestic and pristine natural environment”, he also recognises that the Kingdom has its issues, just like everywhere else. Inflation continues to rise, with the overall consumer price index up by almost 9% in the past year. Food insecurity is also a reality (Bhutan imports about 50% of its food) and the country has seen a nearly 15% hike in food costs. The impact of closing its borders from March 2020 through August 2021 also meant that and at least 50,000 individuals working in the tourism industry lost their jobs and livelihoods, like Dozi.

Yet, good governance, one of the cornerstones of GNH, has been crucial to Bhutan’s survival throughout the pandemic. The government’s swift response to coronavirus’ socio-economic impact has been lauded by the international community, as it deferred the payment of taxes and issued financial aid to citizens. Parliament members donated one month’s salary to the relief efforts. The government also prioritised the vaccination of its citizens and currently 90.2% of the eligible population is fully vaccinated.

“What is so special about being Bhutanese is that there is always a united sense of gratitude, communal well-being and national identity,” added Thinley Choden, a social entrepreneur and consultant. 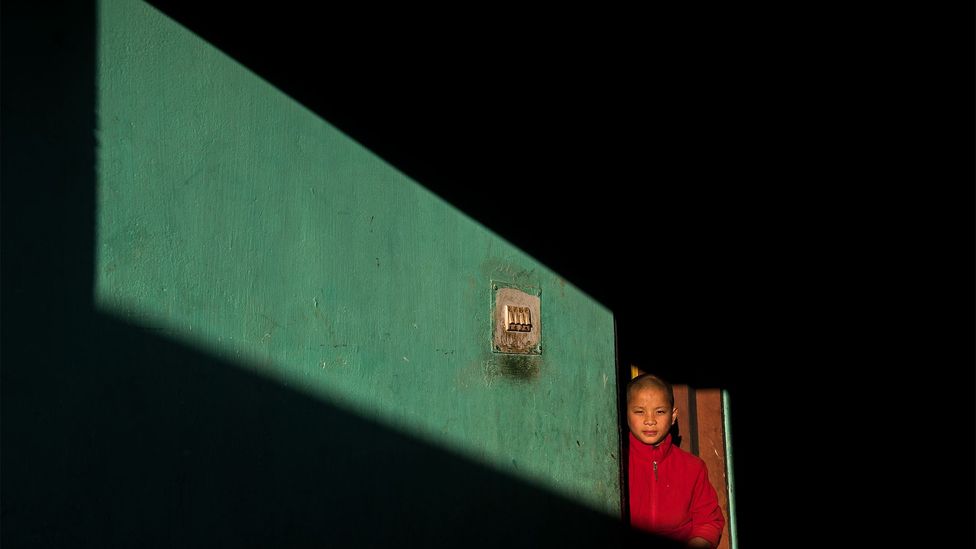 Bhutan may nationalise happiness, but it has its issues, just like everywhere else (Credit: Scott A Woodward)

Choden believes that part of the reason why the Bhutanese view happiness differently than other cultures is because of their ability to reconcile past and present. “Bhutanese culture is strongly rooted in our traditions and spiritual values, but we are a very progressive and practical society. Generally, our culture and religion is not prescriptive, and not a black-and-white choice, but rather navigating the middle path in everyday living.”

If there was one piece of advice Rinpoche could share with the world it would be this: “Always remember that the most important thing is to live life in the present moment, and that happiness is not a by-product of external factors, but the result of positively conditioning your mind. Happiness is at the grasp of everyone.”