By JACK WRIGHT FOR MAILONLINE

The Taliban have restarted domestic flights from Kabul airport but fed-up Afghans are still struggling to get cash out of the capital city’s banks which remain closed as the Islamist militant group attempts to consolidate its authority over Afghanistan.

The English-language station, which is owned by the Qatari state, added that the airport’s runway had been repaired with help from Taliban authorities and that two domestic flights were operated from Kabul to the cities of  Mazar-i-Sharif and Kandahar.

It is thought that the reopening of Kabul airport, which had been closed since the end of the US-led withdrawal on August 31, will facilitate an influx of humanitarian aid to help avert what the United Nations has called a ‘looming humanitarian catastrophe’.

Afghanistan’s impoverished economy has been thrown into disarray by the fall of the Ghani government and the Taliban’s seizure of power last month, with many banks in Kabul and other Afghan cities still shut and cash in short supply weeks later.

Without the aid that has sustained the country for years, it is feared the Islamists will find it hard to stave off economic collapse. One-third of the country is facing food insecurity and is in desperate need of funds, according to the World Food Programme.

Western powers have said that they are prepared to engage with the Taliban and send aid, but that formal recognition of the new government and broader economic assistance will depend on action – not just promises – to safeguard civil liberties.

Qatari Foreign Minister Sheikh Mohammed bin Abdulrahman Al-Thani, speaking at a news conference with Foreign Secretary Dominic Raab in Doha, said the Gulf state was talking to the Taliban and working with Turkey for potential technical support to restart operations in Kabul airport.  +11 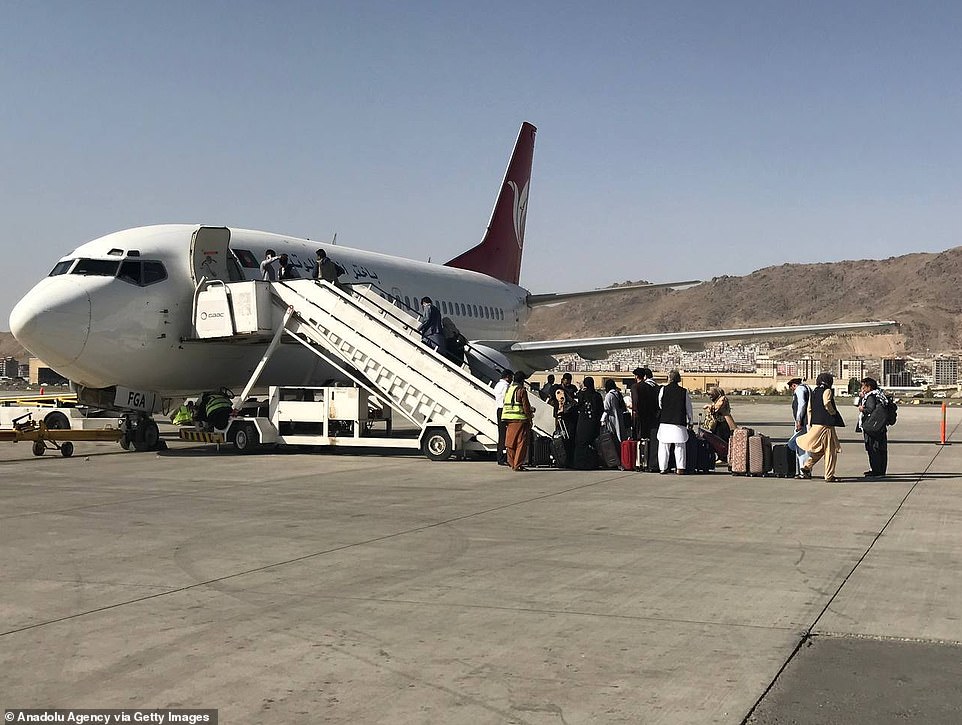 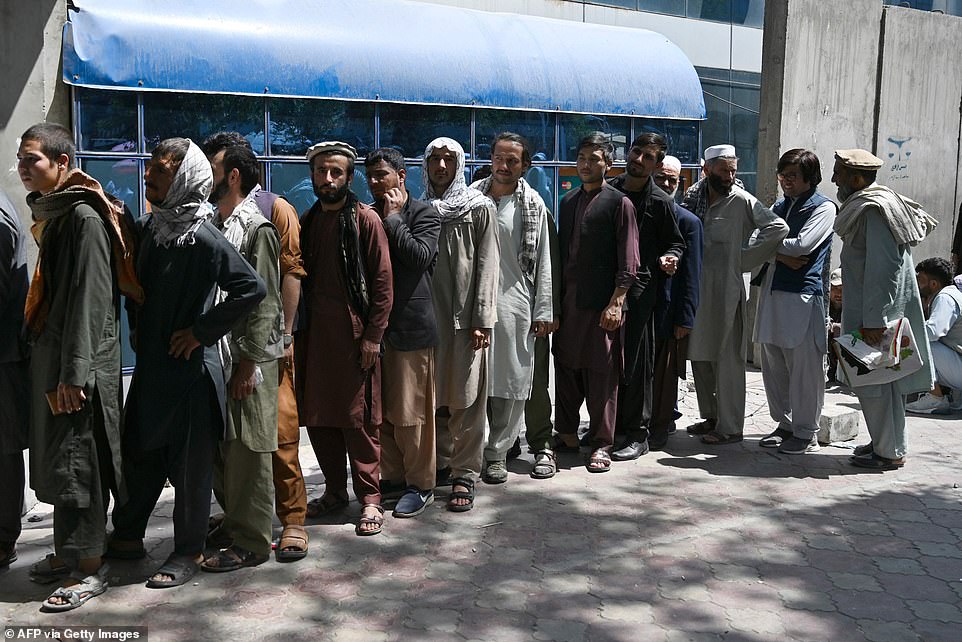 The United Nations chief will convene a ministerial meeting in Geneva on September 13 to seek a swift scale-up in funding to address the growing humanitarian crisis in Afghanistan, where nearly half the country’s 38 million people need assistance.

UN spokesman Stephane Dujarric made the announcement Friday and said Secretary-General Antonio Guterres will also appeal ‘for full and unimpeded humanitarian access to make sure Afghans continue to get the essential services they need.’

Dujarric said the UN appeal for $1.3billion for 2021 to help more than 18 million people is just 40 per cent funded, leaving a $766million deficit.

‘Afghanistan faces a looming humanitarian catastrophe,’ the UN spokesman said. ‘One in three Afghans do not know where their next meal will come from. Nearly half of all children under the age of 5 are predicted to be acutely malnourished in the next 12 months.’

Earlier Friday, Dujarric said the secretary-general is ‘very grateful for the generosity’ of Denmark, Kazakhstan, North Macedonia, Pakistan, Poland, Qatar, the United Arab Emirates and the United States for making available facilities and transport for the temporary relocation of UN staff in Afghanistan.

Dujarric announced August 18 that about 100 of the UN’s 300 international staff were being moved to Kazakhstan to work remotely because of security concerns.

The Taliban are unlikely to get quick access to around $10billion of assets held abroad by the Afghan central bank, and are struggling to reassure banks that the economy under the group will be fully functional.

It is expected that the Taliban’s supreme leader, Haibatullah Akhundzada, will have ultimate power over a new governing council, with a president below him, a senior Taliban official told Reuters news agency last month.

The Taliban have tried to present a more moderate face to the world since they swept aside the US-backed government and returned to power last month, promising to protect human rights and refrain from reprisals against old enemies.

But the United States, the European Union and others have cast doubt on such assurances, saying formal recognition of the new government – and the economic aid that would flow from that – is contingent on action.

‘So they’ve got a lot to prove based on their own track record … now they also have a lot to gain, if they can run Afghanistan, far, far differently than they did the last time they were in power.’

According to the World Food Programme, one-third of Afghanistan is facing food insecurity, with the WFP’s director David Beasley telling Fox News the organisation is looking to raised $200 million for the country by the end of 2021.

Afghanistan desperately needs money, and the Taliban are unlikely to get swift access to the roughly $10billion in assets mostly held abroad by the Afghan central bank.

The new, Taliban-appointed central bank head has sought to reassure banks the group wants a fully functioning financial system, but has given little detail on how it will provide the liquidity needed, bankers familiar with the matter said.

To make matters worse, Afghanistan’s real gross domestic product is expected to shrink by 9.7 per cent this financial year, with a further drop of 5.2 per cent seen next year, said analysts in a report from Fitch Solutions, the research arm of ratings agency Fitch Group.

Foreign investment would be needed to support a more optimistic outlook, a scenario which assumed ‘some major economies, namely China and potentially Russia, would accept the Taliban as the legitimate government’, Fitch said.

While the Taliban are cementing control of Kabul and provincial capitals, they are fighting with opposition groups and remnants of the Afghan army holding out in mountains north of the capital.

Senior Taliban leader Amir Khan Motaqi called on the rebels in Panjshir province to surrender, saying ‘the Islamic Emirate of Afghanistan is home for all Afghans’, referring to the Taliban-run state.

It is thought the reopening of Kabul airport, which had been closed since the end of the US-led withdrawal, will facilitate an influx of humanitarian aid to help avert what the United Nations called a ‘looming humanitarian catastrophe’

Afghanistan’s impoverished economy has been thrown into disarray by the fall of the Ghani government and the Taliban takeover, with many banks still closed and cash in short supply

According to the World Food Programme, one-third of Afghanistan is facing food insecurity, with the WFP’s director David Beasley telling Fox News the organisation is looking to raised $200 million for the country by the end of 2021+11

Taliban and opposition forces were fighting on Saturday for control of the Panjshir valley north of Kabul, the last province in Afghanistan holding out against the Islamist militia, according to reports.

Taliban sources had said on Friday the group had seized control of the valley, although the resistance denied it had fallen.

The Taliban have so far issued no public declaration that they had taken the valley, which resisted their rule when they were last in power in Kabul in 1996-2001.

A spokesman for the National Resistance Front of Afghanistan, which groups opposition forces loyal to local leader Ahmad Massoud, said Taliban forces reached the Darband heights on the border between Kapisa province and Panjshir but were pushed back.

Opposition leader Ahmad Massoud, son of a former mujahideen commander who fought against the Taliban in northeastern Afghanistan in the late 1990s, told CNN his forces were fighting for a ‘decentralised state where power is equally distributed between the different ethnic and sectarian groups’.

‘Unfortunately, the Taliban have not changed, and they still are after dominance throughout the country,’ he said.

‘With the arrival of the Taliban, it’s right to say that there is security, but business has gone down below zero,’ Karim Jan, an electronic goods shop owner, told AFP.

Gunnar Wiegand, the European Commission’s managing director for Asia and the Pacific, said the European Union would not formally recognise the Islamist group until it met conditions including the formation of an inclusive government, respect for human rights and unfettered access for aid workers.

Speaking to the BBC, Akhundzada said on Wednesday: ‘All ethnic groups that are living in Afghanistan – they’re Afghans – they have a right to be in the government.

‘But in this new government which is being announced – in the top posts – i mean to say in the cabinet – there may not be women.’

In the western city of Herat, some 50 women took to the streets in a rare, defiant protest for the right to work and over the lack of women’s participation in the new government. 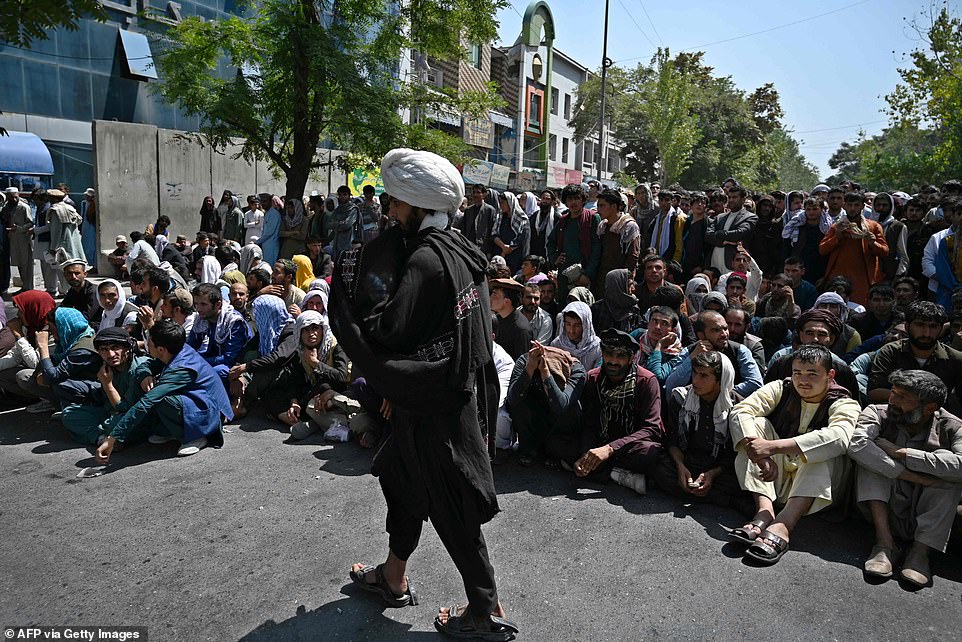 A Taliban fighter walks in front of people sitting along a road outside a bank waiting to withdraw money at Shar-e-Naw neighborhood in Kabul on September 4, 2021+11 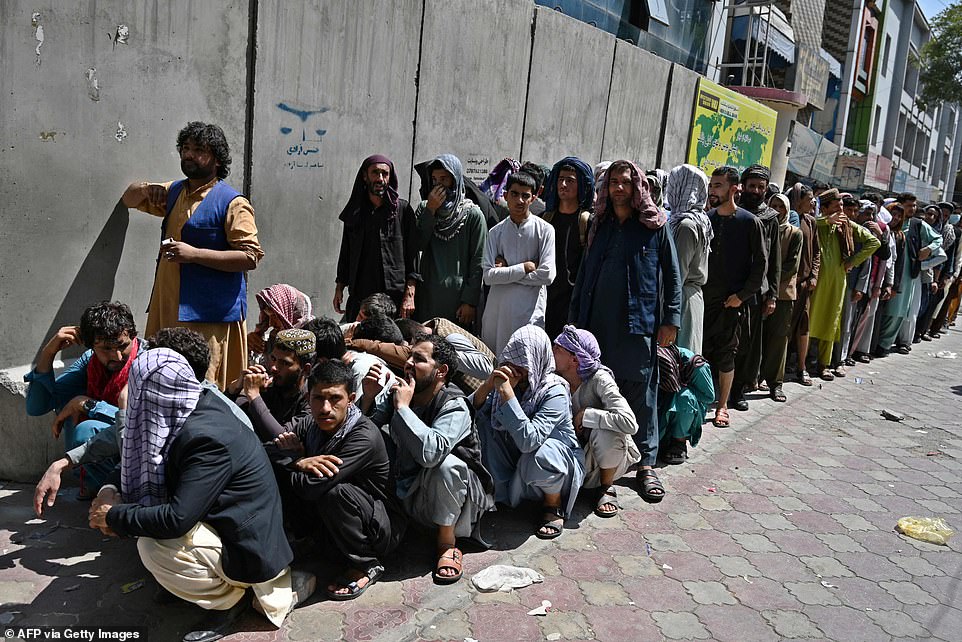 ‘It is our right to have education, work and security,’ the protesters chanted in unison, said an AFP journalist who witnessed the protest. ‘We are not afraid, we are united,’ they added.

Herat is a relatively cosmopolitan city on the ancient silk road near the Iranian border. It is one of the more prosperous in Afghanistan and girls have already returned to school there.

One of the organisers of the protest, Basira Taheri, told AFP she wanted the Taliban to include women in the new cabinet. ‘We want the Taliban to hold consultations with us,’ Taheri said. ‘We don’t see any women in their gatherings and meetings.’

Among the 122,000 people who fled Afghanistan in a frenzied US-led airlift that ended on Monday was the first female Afghan journalist to interview a Taliban official live on television.

Speaking to AFP in Qatar, the former anchor for the Tolo News media group said women in Afghanistan were ‘in a very bad situation’.

‘I want to say to the international community – please do anything (you can) for Afghan women,’ Beheshta Arghand said.