‘It keeps me awake at night’: Paralympic gold medalist blinded in Afghanistan questions US’ ‘war on terror’

Tokyo (CNN)A history-making US Paralympic gold medalist, who was blinded while serving with the American military in Afghanistan, says he questions whether or not the 20-year long “war on terror” was worth it.Brad Snyder became the first American man to win an individual triathlon event in either the Olympics or the Paralympics when he clinched paratriathlon gold in the PTVI category in Tokyo on Saturday, crossing the line with guide Greg Billington in a time of 1:01:16.The 37-year-old had only made the switch to the event three years ago, having already claimed a glittering haul of medals in Paralympic swimming.

“This has been a long journey, my transition into triathlon over the past few years, there’s been a lot of major obstacles … I’m really thankful to be here, really thankful the Paralympics happened,” he told CNN’s Selina Wang after winning his sixth Paralympic gold Saturday.

Snyder was a member of the US Navy’s elite bomb disposal squad for seven years, serving in Iraq and Afghanistan — where he was permanently blinded after he stepped on an improvised explosive device (IED) during a tour of duty in 2011.He said in the immediate aftermath of the explosion he was surprised to still be alive. “Thankfully, I was alone when I got hurt, so it only affected me and, thankfully, it detonated a short distance in front of me … which largely saved my life and saved my limbs,” he said. 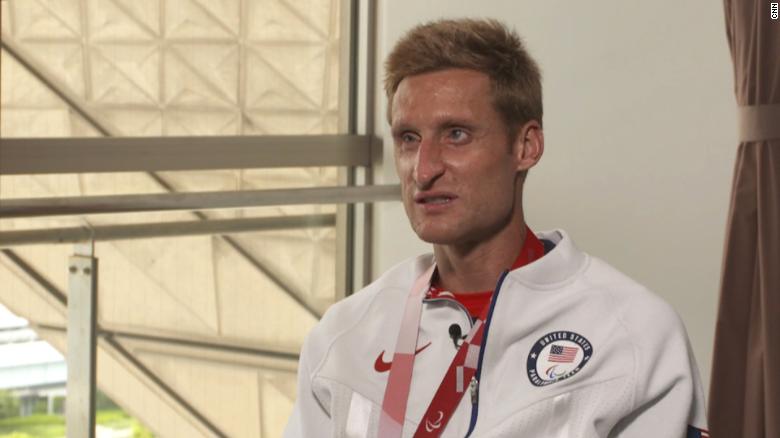 US Paralympic gold medalist Brad Snyder speaks with CNN.Snyder’s victory comes amid turmoil in Afghanistan as US troops withdraw from the country, which is now back under the control of the Taliban.He said he felt “prevailing sadness” over the hardline Islamist group’s return to power, but added he understood the US military couldn’t stay in Afghanistan “forever.””The mistakes of the last 20 years don’t justify future investment in my view,” he said. “We’ve quelled the violence for 20 years and stability has not prevailed … removing yourself is incredibly challenging.

“Synder said he was unsure whether the US’ “war on terror” in Afghanistan and Iraq over the past 20 years had been worth the cost.

“It plagues me, it keeps me awake at night and I think about it a lot, especially being a person whose life was fundamentally changed by going to Afghanistan,” he said.Snyder said he is studying for a PhD in Public Policy at Princeton University to try and “make sense” of the questions about whether the war in Afghanistan was worth it. His intention is to return to the US Naval Academy to help mold a future generation of American military leaders and prepare them for the “fights of tomorrow.”He said the thought of teaching future officers helped him to “make sense” over questions about whether the war in Afghanistan was worth it.But Snyder said he didn’t view his sacrifice as for the people of Afghanistan, but for the “notion of liberty, the notion of freedom” and “human rights.””And that sacrifice, that fight is still alive, that fight is something we’ll be fighting until long after I’m gone,” he said. 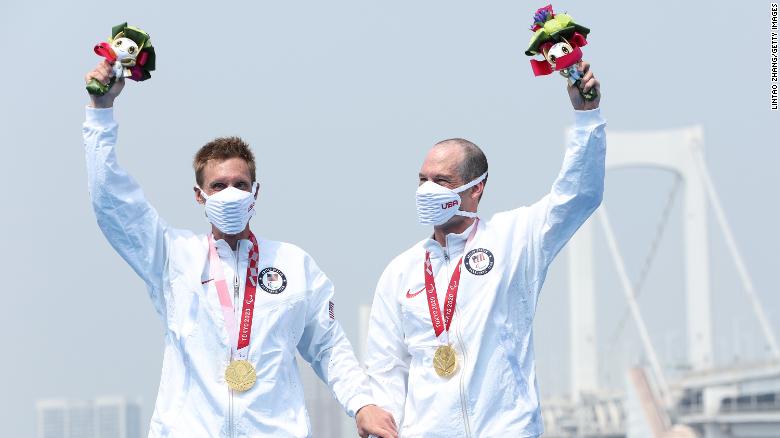 Snyder and guide Greg Billington celebrate their triathlon gold on the podium in Tokyo on August 28.

From a young age, Snyder said he felt it was a “foregone conclusion” that he would join the US military.In 2001, he was a high school student when the 9/11 terrorist attacks took place and he said he wanted to make sure “something like that never happened on home soil again.”But his career in the US Navy ended on September 7, 2011, when he stepped on a 40-pound IED in a minefield just south of Kandahar in southern Afghanistan.Snyder said while many people would have been devastated to lose their vision, he felt grateful just to be alive. “I was a bomb tech, I know what a 40-pound blast can do … that perspective is what got me through the initial steps of adjusting to a new life without vision,” he said.

Over the following years, Snyder said he worked to adapt to his new life, and although there were hard moments, he tried to maintain a “sense of gratitude.””You say ‘I wish I could just see for a moment so I could do the dishes’ or I could, you know, figure this thing out on my computer, but, you know, you can wish all day long and it’s not going to get you anywhere,” he said.”You can’t change what it is, you can only change how you react to it or what you do about the set of circumstances that you’re in.”Snyder and his guide Greg Billington compete in the men’s triathlon category PTVI during the Tokyo 2020 Paralympics at the Odaiba Marine Park.A year after losing his eyesight, Snyder made his Paralympic debut in swimming at the London 2012 Games. He won gold in the 100 meter freestyle and 400 meter freestyle, and silver in the 50 meter freestyle — all in the S11 category. He topped that medal haul at Rio 2016, defending his two titles, and also adding gold in the 50 meter freestyle and silver in the 100 meter backstroke S11.

He said being a Paralympian had helped him “rebuild his identity” after his military career ended, an experience that left him “fractured.””That’s one of the reasons that I really like the Paralympic movement. For me, coming off of the battlefield, the Paralympic movement offered me in a way to reidentify myself,” he said.