The US Destruction of Iraq: We Should Never Forget 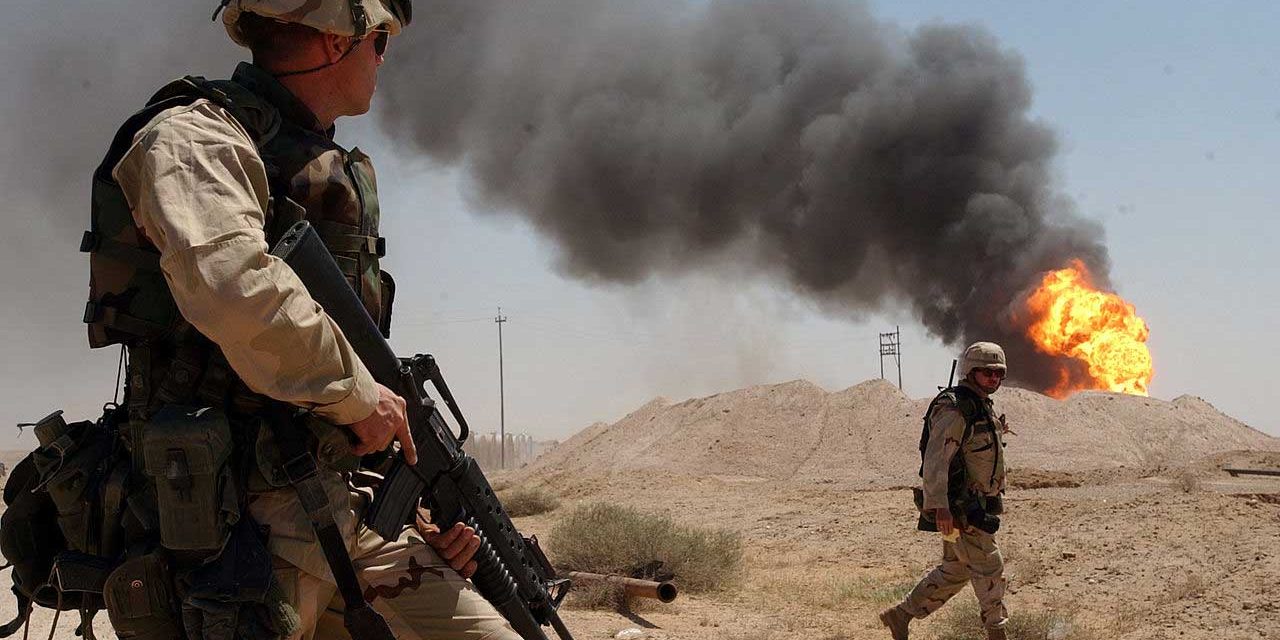 US soldiers near a burning oil well in the Rumaylah oil fields in southern Iraq, April 2, 2003. (Arlo K. Abrahamson/US Navy)

US government officials as though the illegal invasion of Iraq and destruction of the country occurred. But we must never forget.

The modern, educated, advanced nation of Iraq was reduced to a virtual failed state … the United States, beginning in 1991, bombed for much of the following 12 years, with one dubious excuse after another; then, in 2003, invaded, then occupied, overthrew the government, tortured without inhibition, killed wantonly … the people of that unhappy land lost everything—their homes, their schools, their electricity, their clean water, their environment, their neighborhoods, their mosques, their archaeology, their jobs, their careers, their professionals, their state-run enterprises, their physical health, their mental health, their health care, their welfare state, their women’s rights, their religious tolerance, their safety, their security, their children, their parents, their past, their present, their future, their lives…

More than half the population either dead, wounded, traumatized, in prison, internally displaced, or in foreign exile…

The air, soil, water, blood, and genes drenched with depleted uranium … the most awful birth defects … unexploded cluster bombs lying in wait for children to pick them up … a river of blood running alongside the Euphrates and Tigris … through a country that may never be put back together again…

“It is a common refrain among war-weary Iraqis,” reported the Washington Post in 2007, “that things were better before the U.S.-led invasion in 2003.”

The United States has not paid any compensation to Iraq.

The United States has not made any apology to Iraq.

Foreign policy is even more sensitive a subject in the United States than slavery of the black people and genocide of the Native Americans. The US has apologized for these many times, but virtually never for the crimes of American foreign policy.

In 2014, George W. Bush, the man most responsible for this holocaust, was living a quiet life in Texas, with a focus on his paintings. “I’m trying to leave something behind”, he said.

Yes, he has certainly done that—mountains of rubble for one thing; rubble that once was cities and towns. His legacy also includes the charming Islamic State. Ah, but Georgie Boy is an artiste.

We need a trial to judge all those who bear significant responsibility for the past century—the most murderous and ecologically destructive in human history. We could call it the war, air and fiscal crimes tribunal and we could put politicians and CEOs and major media owners in the dock with earphones like Eichmann and make them listen to the evidence of how they killed millions of people and almost murdered the planet and made most of us far more miserable than we needed to be. Of course, we wouldn’t have time to go after them one by one. We’d have to lump Wall Street investment bankers in one trial, the Council on Foreign Relations in another, and any remaining Harvard Business School or Yale Law graduates in a third. We don’t need this for retribution, only for edification. So there would be no capital punishment, but rather banishment to an overseas Nike factory with a vow of perpetual silence.—Sam Smith

On March 2, 2014 US Secretary of State John Kerry condemned Russia’s “incredible act of aggression” in Ukraine. “You just don’t in the 21st century behave in 19th century fashion by invading another country on completely trumped up pretext.”

Iraq 2003 was in the 21st century. The pretext was completely trumped up. Senator John Kerry voted for it. Nice moral authority you have there, John.

On the same occasion, concerning Ukraine, President Obama spoke of “the principle that no country has the right to send in troops to another country unprovoked”.  Do our leaders have no memory or do they think we’ve all lost ours?

Does Obama avoid prosecuting the Bush-Cheney gang because he wants to have the same rights to commit war crimes? The excuse he gives for his inaction is so lame that if George W. had used it people would not hesitate to laugh. On about five occasions, in reply to questions about why his administration has not prosecuted the like of Bush, Cheney, Rumsfeld, Wolfowitz, et al. for mass murder, torture and other war crimes, former law professor Obama has stated: “I prefer to look forward rather than backwards.” Picture a defendant before a judge asking to be found innocent on such grounds. It simply makes laws, law enforcement, crime, justice, and facts irrelevant. Picture Chelsea Manning and other whistleblowers using this argument. Picture the reaction to this by Barack Obama, who has become the leading persecutor of whistleblowers in American history.

Noam Chomsky has observed: “If the Nuremberg laws were applied, then every post-war American president would have been hanged.”

It appears that the German and Japanese people only relinquished their imperial culture and mindset when they were bombed back to the stone age during World War II. Something similar may be the only cure for the same pathology that is embedded into the very social fabric of the United States. The US is now a full-blown pathological society. There is no other wonder drug to deal with American-exceptionalism-itis.

This article was originally published at WilliamBlum.org.

William Blum is an author, historian, and renowned critic of U.S. foreign policy. He is the author of numerous books, including “Killing Hope: U.S. Military and CIA Interventions Since World War II” and “Rogue State: A Guide to the World’s Only Superpower”.

source The US Destruction of Iraq: We Should Never Forget (foreignpolicyjournal.com)