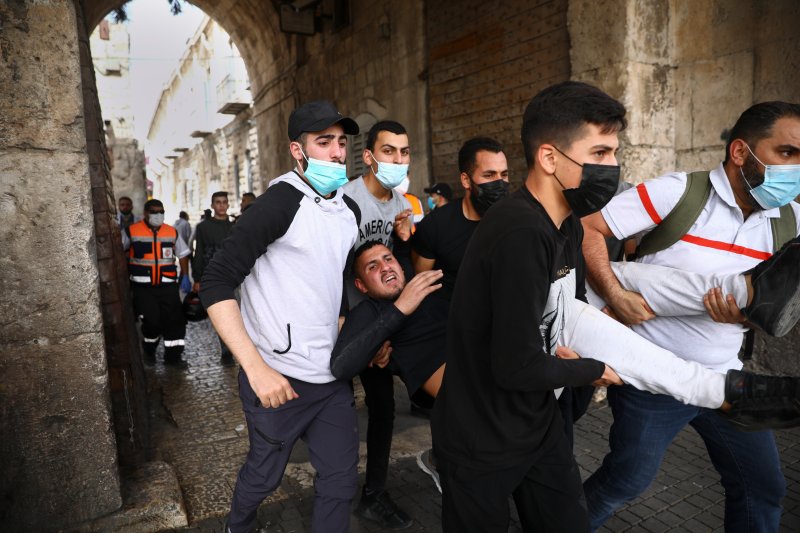 Palestinians evacuate a wounded protester during clashes with Israeli security forces at the Lions Gate in Jerusalem’s Old City, Monday, May 10, 2021. Israeli police clashed with Palestinian protesters at a flashpoint Jerusalem holy site on Monday, the latest in a series of confrontations that is pushing the contested city to the brink of eruption. The latest violence at the Al-Aqsa Mosque compound came after days of mounting tensions between Palestinians and Israeli authorities in the Old City of Jerusalem. Oded Balilty–APBY ASSOCIATED PRESS MAY 10, 2021 5:24 AM EDT

(JERUSALEM) — Israeli police clashed with Palestinian protesters at a flashpoint Jerusalem holy site on Monday, the latest in a series of confrontations that is pushing the contested city to the brink of eruption.

Palestinian medics said at least 180 Palestinians were hurt in the violence at the Al-Aqsa Mosque compound, including 80 who were hospitalized.

Police said protesters hurled stones at officers and onto an adjoining roadway near the Western Wall, where thousands of Israeli Jews had gathered to pray.

In a statement, police alleged extremists were behind the violence and said it would “not allow extremists to harm the safety and security of the public.”

The latest clashes in the sacred compound came after days of mounting tensions between Palestinians and Israeli authorities in the Old City of Jerusalem, the emotional ground zero of the conflict. Hundreds of Palestinians and about two dozen police officers have been hurt over the past few days.

The Palestinian Red Crescent said at least 80 people injured in the skirmishes at the Al-Aqsa Mosque compound required hospitalization. One was in serious condition. Amateur video footage posted on social media showed police stun grenades and tear gas inside the mosque during skirmishes between officers and Palestinian protesters.

On Monday morning, officers fired tear gas and stun grenades and protesters hurled stones and other objects at police. Police said protesters threw stones from the mosque compound onto an adjoining roadway near the Western Wall, where thousands of Israeli Jews had gathered to pray. Palestinians said police fired stun grenades into the compound.

The site, known to Jews as the Temple Mount and to Muslims as the Noble Sanctuary, is considered the holiest site in Judaism and the third holiest in Islam. The compound is the epicenter of the conflict and has been the trigger for rounds of Israel-Palestinian violence in the past.

Earlier, police barred Jews from visiting the Al-Aqsa compound on Monday, which Israelis mark as Jerusalem Day with a flag-waving parade through the Old City and its Muslim Quarter to the Western Wall, the holiest site where Jews can pray. The marchers celebrate Israel’s capture of east Jerusalem in the 1967 Mideast war.

Israel captured east Jerusalem, along with the West Bank and Gaza Strip, in the 1967 war. It later annexed east Jerusalem, home to the city’s most sensitive holy sites, and considers the entire city its capital. The Palestinians seek all three areas for a future state, with east Jerusalem as their capital.

The police decision to ban Jewish visitors temporarily from the holy site came hours before the start of the Jerusalem Day march which is widely perceived by Palestinians as a provocative display of Jewish hegemony over the contested city.

Police have allowed the parade to take place despite growing concerns that it could further inflame the tension.

This year the march coincides with the Muslim holy month of Ramadan, a time of heightened religious sensitivities, and follows weeks of clashes between Israeli police and Palestinians in Jerusalem.

Violence has occurred almost nightly throughout Ramadan, beginning when Israel blocked off a popular spot where Muslims traditionally gather each night at the end of their daylong fast. Israel later removed the restrictions, but clashes quickly resumed amid tensions over the eviction plan in Sheikh Jarrah, an Arab neighborhood where settlers have waged a lengthy legal battle to take over properties.

Israel’s Supreme Court postponed a key ruling Monday that could have led to the evictions of dozens of Palestinians from their homes, citing the “circumstances.”

The Israeli crackdown and planned evictions have drawn harsh condemnations from Israel’s Arab allies and expressions of concern from the U.S., European Union and United Nations.

The U.N. Security Council scheduled closed consultations Monday on the soaring tensions in Jerusalem. Diplomats said the meeting was requested by Tunisia, the Arab representative on the council.

A White House statement said that Sullivan called on Israel to to “pursue appropriate measures to ensure calm” and expressed the U.S.’s “serious concerns” about the ongoing violence and planned evictions.

The tensions in Jerusalem have threatened to reverberate throughout the region.

Palestinian militants in the Gaza Strip have fired several barrages of rockets into Israel, and protesters allied with the ruling Hamas militant group have launched dozens of incendiary balloons into Israel, setting off fires across the southern part of the country.

In response, COGAT, the Israeli defense ministry organ responsible for crossings with the Gaza Strip, announced Monday that it was closing the Erez crossing to all but humanitarian and exceptional cases until further notice.

“This measure follows the decision to close the fishing zone yesterday, and following rocket fire and the continued launching of incendiary balloons from the Gaza Strip toward the State of Israel, which constitute a violation of the Israeli sovereignty,” COGAT said in a statement.