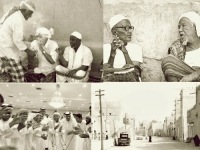 They are known for their hard work, persistence, love, master of trade and perseverance. Many historians have described them as active migratory people. The majority of them have been known to make great money outside their homeland, Hadhramawt, in South Yemen. Sir Richard Burton, the famous historian and orientalist who died in 1890, once said about them, “The sun doesn’t rise upon a land that does not contain a man from Hadhramawt”.

Hadhrami people’s love for trade dates back to hundreds of years, when many of them migrated to the Indian Subcontinent and Southeast Asia. Hadhrami traders played a major role in spreading Islam in Indonesia, the Philippines, and Malaysia. In fact, the people of Africa and Asia came to know about Islam through Hadhrami traders and travelers. It was them too who spread the Arabic language in these regions.

Renowned Arab historian and globetrotter, Shamsuddin Al-Maqdisi who died in 990, once described Aden City as, “China’s passageway, Yemen’s trench, Morocco’s warehouse, and the city of all trades.” He used this metaphor to describe how Aden was an export-import hub at the time.

Al-Maqdisi was also one of the best Muslim geographers. He wrote a book about different cities and places in Arabia based on his observations and visits. He mentioned the story of an Arab trader whom he met on his way to Aden on board of a ship. Al-Maqdisi was traveling to Hadhramawt to learn about it and gather more information.

He gave Al-Maqdisi a short piece of advice. He said Hadhrami people are rich and are fond of trade and business. If one lived with them for a short time, he would start to become like them and he would start his own business and forget about anything else. This is exactly what happened to Al-Maqdisi when he arrived to Hadhramawt. He noticed that the majority of the people were affluent traders. Worried he would be fascinated by them and get distracted from the main purpose of his travel, he decided to leave Hadhramwt.

Hadhramis are very honest and give great importance to integrity. They are suave businessmen who largely contribute to developing the economy of any country they settle in.

Seriousness and well-management of financial resources is another characteristic of Hadhramis. This fact is reflected in the Hadhrami common saying, “The more you spend time in your business, the more profits you’ll make.”

When it comes to profits, they tend to be patient. They work slowly but surely to grow their businesses and start on the right foot. Some of the businesses they do include auto spare parts, foodstuffs, gold, restaurants, construction materials, electric appliances, heavy machinery, real estate, red brick factories and quarries.

Shakeeb Arsalan (1869-1946), a well-known Lebanese writer and poet, said the true history of Hadhramis and their glory manifests outside their homeland, Hadhramawt. Sheikh Abdullah Balkhair, who was an adviser to King Abdul Aziz and King Saud, said Arsalam was going actually to write a large book about Hadhrami people. However, he died before beginning to write the book.

Sheikh Ali Al-Tantawi (1909-1999), eminent Syrian Muslim scholar, described them as, “the Phoenicians of Modern Age,” because the majority of African and Asian Muslims embraced Islam through Hadhrami traders.

Rarely would you find a Hadhrami running an illegal business or engaging in illegal activities. They are law-abiding people. They instill this characteristic in their children at an early age. They pass down to them the same rule their grandparents passed down to them “Be a God-fearing person so that your business grows and prospers.”