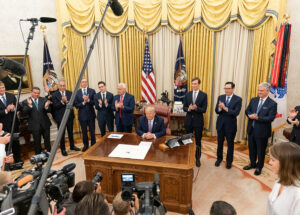 EXECUTIVE SUMMARY: The Israeli peace agreement with the United Arab Emirates (UAE) is transforming strategic alliances in the Middle East. It formalizes the Israeli-Sunni Arab bloc against the aggressive and violent Iranian Shiite crescent that spreads from Tehran via Iraq and Syria to Lebanon and from Tehran to Yemen. The agreement sends messages to Iran, the Palestinians, the EU, and Joe Biden. It shows that the Arab states are no longer ready to sacrifice vital strategic interests for Palestinian rejectionism of peace proposals, most recently the Trump peace plan. It also busts myths about Israel and Middle Eastern politics.

The Israel-UAE agreement is extremely important. This is the third peace agreement to be signed between Israel and an Arab country. The other two were with Egypt (1979) and Jordan (1994). The UAE agreement will increase the prospects for peace, stability, and prosperity in the Middle East.

Israel and several Gulf states have been closely collaborating under the table for a number of years, mainly on security issues. These relations are now being opened up and upgraded. More and more people across much of the Sunni Muslim Arab world no longer perceive Israel as an enemy but rather as a potential ally. This deal will increase Israel’s legitimacy as a Jewish state in the Middle East.

A combination of threats and opportunities made the agreement happen. The threat both countries face is Iran’s quest for hegemony and domination in the Middle East via violence, terrorism, military interventions, and nuclear weapons. Iran is active in Iraq, Syria, Lebanon, and Yemen. The Arab Gulf states are especially vulnerable to the Iranian threat.

The Israel-UAE alliance is expected to deal more effectively with Iran. Other Gulf states like Bahrain and Oman are likely to sign similar agreements with Israel, as they share the same concerns that brought about the agreement with the UAE.

In addition to the matter of the common threat, opportunities exist in the fields of technology and trade. Israel, the “start-up nation,” leads the world in innovation, advanced technologies, and artificial intelligence in the fields of medicine, agriculture, solar energy, water conservation, and desalinization—all important areas for the Gulf states.

The UAE is seeking breakthroughs in these and other areas and wants to have more influence on Middle Eastern politics. It has the resources while Israel has the human power with which to promote innovation, sustainability, and entrepreneurship. The agreement will also improve the reputation and standing of both countries in the eyes of the world.

The Israel-UAE agreement halted Israel’s plan to unilaterally apply sovereignty to areas in the West Bank that the Trump peace plan had allocated to Israel. But it also sends the Palestinians four clear messages:

The Israel-UAE agreement exposes the enemies of peace and stability in the region. Iran and Erdoğan’s Turkey, the two big non-Arab Muslim theocracies, have not only condemned the agreement but have threatened the UAE and promised retaliation. Their purpose is to deter other Arab countries from following the UAE’s example. Recently, Turkey threatened Greece over gas reserves and maritime rights in the Eastern Mediterranean. It is about time the US and NATO define Turkey as a hostile power undermining Western interests in the region and act accordingly.

The agreement sends a message to the EU, especially to the Western member states that still subscribe to obsolete beliefs about the Middle East. Despite the so-called “Arab Spring” and the ongoing horrific civil wars in Syria, Yemen, and Libya, they still mistakenly refer to the Israeli-Palestinian conflict as the “Middle East Conflict” and view peace between Israel and the Palestinians as the key to stability for the entire region. Like the Palestinians, they continue to claim that Arab-Israeli peace can come only after an Israeli-Palestinian peace.

Trump would like to have a public celebration in honor of this historic agreement like those on the White House lawn that marked the signing of the peace agreement with Egypt in 1979 and the Oslo Accords in 1993, as well as the one held on the border between Israel and Jordan to celebrate their 1994 peace agreement. The “Deal of the Century” hasn’t worked out too well, but the Israel-UAE agreement is certainly cause for celebration.

Trump is hoping this breakthrough will help him win the 2020 presidential election, as up to this point he has had no significant foreign policy achievements. While this deal is indeed a major achievement, it won’t significantly affect the vote. American voters are focused on the coronavirus pandemic and the economy and are unlikely to place much importance on this agreement.

Timing could be a factor in the US role. The selection of Kamala Harris as the Democratic VP candidate is a big plus for Biden and strengthens his candidacy. The Israel-UAE agreement could somewhat offset the negative repercussions.

Israel and the Gulf states are worried to death about Biden and the Democrats because of their intention to restore the nuclear deal with Iran negotiated by Barack Obama. The Israel-UAE agreement could be a message to Biden and the Democrats that they would do well to give more weight to the interests of American allies in the region, and should certainly not legitimize an untrustworthy Iran’s imperial aspirations.

This is an expanded and revised version of an article published in the Jerusalem Post on August 14, 2020.