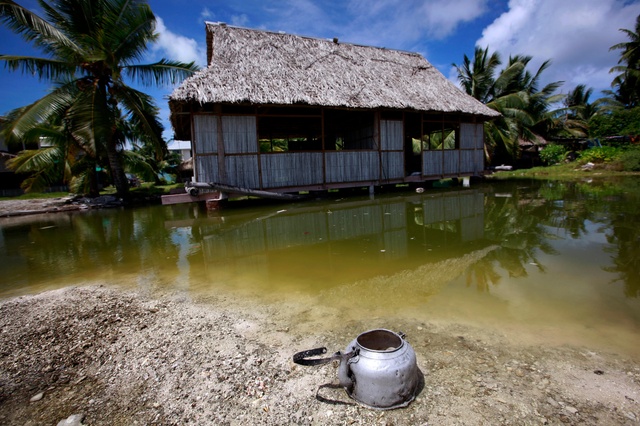 The low-lying South Pacific island nation of Kiribati has a population of more than 110,000, but its average height of 2 metres above sea level makes it one of the countries most vulnerable to rising seawater and other climate change effects
(Reuters / David Gray)

Climate refugees have grabbed international headlines and their stories resonate easily, mirroring those of conflict refugees. Yet the topic is extremely complex, say experts. The Geneva-based Platform on Disaster Displacement is one of the organisations working on this issue, seen as one of the biggest humanitarian challenges this century.

According to the Geneva-based International Panel on Climate Change (IPCC), it is estimated that sea level rise associated with a 2°C warmer world could submerge the homeland of 280 million people by the end of this century.

Currently, many countries and regions are affected by disasters year after year. In 2018 alone, 17.2 million people were forced to leave their homes due to disasters in 148 countries and territories and 764,000 people in Somalia, Afghanistan and several other countries were displaced following drought.

“We have a good general understanding of the scale of problem in terms of the numbers of people being forced to leave their homes because of sudden disaster events. But we don’t know how many of these people actually then cross borders,” explains Walter Kälin, envoy of the chairmanship of the Geneva-based Platform on Disaster Displacement, the follow-up to theNansen Initiative.

That intergovernmental process, launched in 2012 by Switzerland and Norway, aimed to provide states with a “toolbox” on how to prepare for forced migration due to severe climate change effects.

Climate refugees – like the case of Ioane Teitiota from the Pacific island of Kiribati decided in a recent landmark UN Human Rights Committee ruling (see infoboxes below) – have grabbed international headlines and their stories resonate easily, mirroring that of conflict refugees.

Yet the topic is extremely complex, say experts. The convention relating to the status of refugees, signed in 1951, has no provision for climate change as a reason for people to flee their country and seek asylum elsewhere. Climate migration is mostly internal. It is not necessarily forced, and isolating environmental or climatic factors is difficult.

“Disaster displacement is really a cross-cutting issue,” explains Kälin. “It has to do with climate change, disasters, migration, humanitarian action and development aid… and in most cases, displacement is multi-causal.”