Did you know Harvard recognizes Quran as one of best expressions for justice?

John W. Weeks Bridge and clock tower over Charles River in Harvard University campus in Boston with trees, boat and blue sky. The Muslim Times has the best collection about the holy Quran

The university references a verse from the Quran, regarding it as one of the greatest expressions of justice in history.

When it comes to the law, both legislation and implementation are deemed relative. But the same can’t be said for justice as by definition it is the offering of what is morally fair and right. As we know, the law should seek justice and Harvard knows exactly how Islam is doing so.

Harvard Law School, one of the world’s most prestigious institutions (No. 7 in the world, to be exact), actually speaks of justice at the entrance of its faculty library. In doing so, it references a verse from the Quran, regarding it as one of the greatest expressions of justice in history.

The phrase at hand is Verse 135 of Surat Al-Nisaa (The Women), which is posted on a wall facing the faculty’s main entrance, a wall that portrays some of the best phrases with regards to justice. The first media reports of the news date back to February 2014, but the news resurfaced on our newsfeed this week. We thought it’s worth a reminder especially in the age of rising Islamophobia in the U.S., particularly. 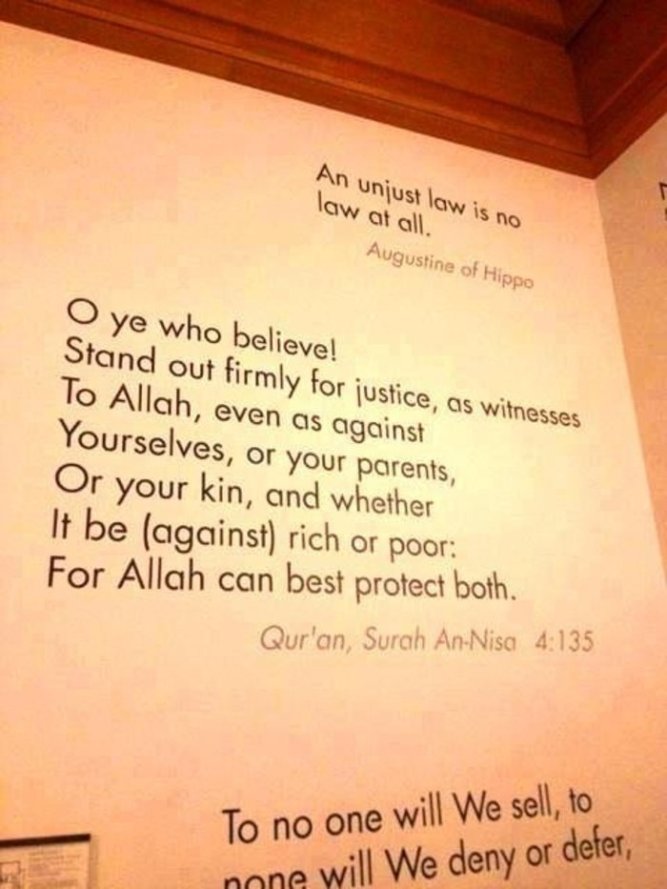 The Quran Applauded as a Landmark Contribution to ‘Words of Justice’ by Harvard Universityhttp://t.co/UCvyGzJmHk pic.twitter.com/gafTxBAaHL

We have saved the above video in the Muslim Times as well: