‘There will be no hope’: Muslims fear Rajapaksa win in Sri Lanka election 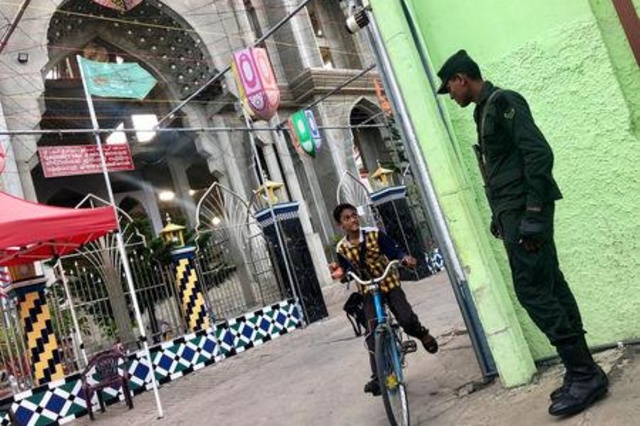 A boy rides a bicycle while looking at an army soldier stationed in front of a Sufi mosque in Kattankudy, Sri Lanka, June 11, 2019. REUTERS/Alexandra Ulmer
(reuters_tickers)

Since the Easter bombings, the community has faced violence and vilification. Many think there may be worse to come

by Hannah Ellis-Petersen in Colombo

The phone calls began two months ago from an unknown number. Hilmy Ahmed, the vice-president of the Sri Lanka Muslim Council, did not recognise the voice but there was no mistaking the threats: throw your support behind Gotabaya Rajapaksa for president or we will set fire to your house, rape your wife and then kill your family.

“This election campaign has the whole Muslim community of Sri Lanka very scared,” said Ahmed, who fled abroad after the calls and direct harassment of his staff. “Almost all the nationalist extremists have banded together behind Gotabaya Rajapaksa and should he win, we fear they will come out in full force with their racist, anti-Muslim agenda and attacks.”

On Saturday, voters in Sri Lanka’s general election will choose between Gotabaya Rajapaksa, the brother of the former president Mahinda Rajapaksa, running for theSLPP, the Sinhalese-Buddhist nationalist party, and Sajith Premadasa, a minister in the current United National party (UNP) government, to be their next president.

The election, happening against a backdrop of some of the worst violence and political instability the country has faced since the end of the civil war a decade ago, could prove a decisive moment, with everything from human rights to sectarian harmony hanging in the balance. Most precarious of all is the place of Muslims in Sri Lankan society.
On Easter Sunday this year, self-radicalised Islamist extremists carried out multiple bombings, killing 269 people in churches and hotels and shaking the foundations of the country, pitting communities who had lived harmoniously against each other.