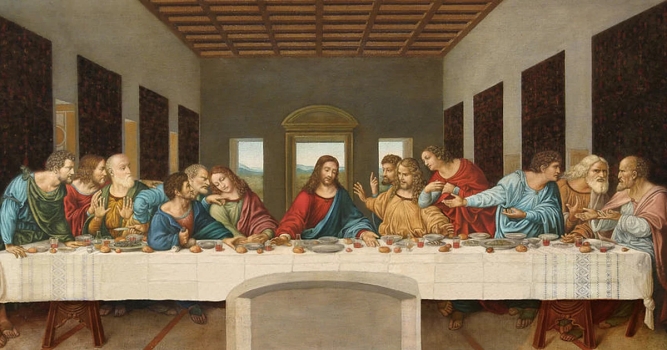 The last supper by Leonardo Da Vinci. The Muslim Times has the best collection for women rights and about Catholicism

Carlos Eugenio Irarrazaval stands down, weeks after appointment by pope to clean up church’s public image

A Chilean auxiliary bishop appointed by Pope Francis less than a month ago has resigned, just weeks after he made controversial comments about the lack of women in attendance at the Last Supper.

Carlos Eugenio Irarrazaval was appointed by the pope in an effort to rebuild the church’s credibility following a pervasive sex abuse scandal that exposed hundreds of allegations now being investigated by Chilean criminal prosecutors.

The archdiocese of Santiago did not specify the reasons for Irarrazaval’s departure in its statement, but said the pope had accepted the bishop’s resignation “in favour of unity and for the good of the church”.

The bishop’s short tenure began with a television interview in May, in which he said there were no women seated at the table at the Last Supper and that “we have to respect that”.

“Jesus Christ made decisions and they were not ideological … and we want to be faithful to Jesus Christ,” he said in reference to the lack of women in attendance.

He also said that perhaps women “like to be in the back room”.

According to the Bible, the Last Supper was Jesus’ last meal with his disciples before his crucifixion, depicted in many famous works of art.

The comments sparked a backlash among women’s groups and critics of the church in Chile at a time when confidence in church leadership in the once staunchly Catholic nation has plummeted.

Pope Francis earlier this year accepted the resignation of Cardinal Ricardo Ezzati as archbishop of Santiago, the highest-ranking member of the Catholic church in Chile, after he was caught up in the country’s sex abuse scandal.

The church’s credibility has been harmed in much of the world by abuse scandals in countries including Ireland, Chile, Australia, France, the United States and Poland.

In Chile, prosecutors say they are investigating more than 150 cases of sexual abuse or cover-up involving more than 200 victims.

Irarrazaval will continue to serve the church as a pastor in Santiago, according to the Archdiocese of Santiago.