The myth of climate wars? 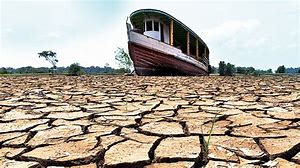 NEW YORK — In the years leading up to Syria’s civil war, the country endured three consecutive record-breaking droughts. By forcing internal displacement, the droughts arguably contributed to the social tensions that erupted in popular protests in 2011. But that does not mean that the Syrian conflict is a “climate war”.

As extreme weather events proliferate, it is becoming increasingly easy to find a link between climate change and violent confrontations. In Sudan, the ethnic cleansing has been tied to the Sahara Desert’s southward expansion, which fuelled social unrest by exacerbating food insecurity. Territorial disputes in the South China Sea have also been connected to food-security concerns, rooted in competition over access to fishing areas. Some now warn of a “brewing water war” between Egypt and Ethiopia, triggered by the latter’s construction of a dam on the River Nile.

But the “climate war” narrative is deeply flawed. From Syria to Sudan, today’s conflicts are the result of multiple complicated and interrelated factors, from ethno-religious tensions to protracted political repression. While the effects of climate change can exacerbate social and political instability, climate change did not cause these wars. This nuance is important, not least for the sake of accountability: Climate change must not be used to duck responsibility for resolving or averting violent confrontations.

Still, military and climate experts argue, climate change is a “threat multiplier”, and thus remains an important national security issue. Climate advocates and academics, however, have long avoided or rejected discussions of “climate security”, not to diminish the risks that climate change poses, but because they fear that framing climate change as a security issue will undermine efforts to mitigate those risks, by enabling the incremental securitisation of climate action.
Securitisation is often a political tactic, in which leaders construct a security threat to justify deploying extraordinary, even illegal measures, that infringe on people’s rights. If the fight against climate change is securitised, it could, for example, be used to rationalise new restrictions on the movement of people, enabled by and reinforcing anti-migrant sentiment.

Framing climate as a security issue can also challenge already-strained international cooperation on climate governance, while driving investment away from necessary interventions, such as the shift to a low-carbon economy, toward advancing military preparedness. The accompanying apocalyptic discourse, moreover, could well lead to public disengagement, further weakening democratic accountability.

Yet, even as some United Nations member states express concern about linking climate change more closely to security, most countries are moving in precisely that direction. In 2013, the American Security Project reported that 70 per cent of countries view climate change as a threat to their security, and at least 70 national militaries already have clear plans in place to address this threat.

The UN Security Council is also becoming more active in the climate security field. After recognising the role of climate change in the Lake Chad conflict (Resolution 2349), the council held its first debates on the relationship between climate change and security, with the participation of a large and diverse group of member states.

Given the impact of climate change on issues like migration and health, decoupling discussions of climate action from national security considerations may never have been feasible. On the other hand, linking climate change to security can positively contribute to mobilising climate action. The key to avoiding the pitfalls of securitisation is to move beyond paradigms, which overemphasise military-focused “hard security” narratives, that continue to shape security policy and public discourse. One way to achieve that is to take a more gender-inclusive approach to conflict prevention and resolution.

Research shows that women are more likely to pursue a collaborative approach to peacemaking, with actors organising across ethnic, cultural and sectarian divides. Such an approach “increases the prospects of long-term stability and reduces the likelihood of state failure, conflict onset and poverty”. When women participate in peace negotiations, the resulting agreements are 35 per cent more likely to last at least 15 years.

Sustainable peace is possible only by recognising the necessity of local women’s leadership, who have relevant expertise and yet are currently excluded from national and multilateral frameworks. After all, if policy decisions are to meet the needs of the affected communities, members of those communities must have a seat at the table.
For example, in Indonesia, Farwiza Farhan has acquired unique insights from years of facilitating community-inclusive forest conversation that respects local stakeholders. In Somalia, Ilwad Elman has proved her ability to navigate intersectional peace-building efforts through her organisation, Elman Peace.

Of course, there is also an imperative to give more women the tools they need to join in this process. The interconnections identified in the UN Sustainable Development Goals (SDG) provide a functional roadmap for delivering the needed equity. In particular, improving reproductive health (SDG 3) and education (SDG 4) of girls and women is one of the most cost-effective ways both to mitigate climate change (SDG 13) and to empower them as community leaders (SDG 5).

Rather than resisting the securitisation of climate, advocates and policymakers should be advancing what the Stockholm International Peace Research Institute calls “the climatisation of security”. This is best done by using security to increase the salience of climate action, highlighting the shortcomings of current security frameworks, and promoting gender inclusiveness and local leadership as holistic and long-term solutions for fostering local, regional and international peace.

Alaa Murabit, a medical doctor and executive director of Phase Minus One, is one of 17 Sustainable Development Goals Advocates appointed by the UN Secretary General. Luca Bücken is a policy adviser and strategist who focuses on migration, security, climate and justice. Copyright: Project Syndicate, 2019.