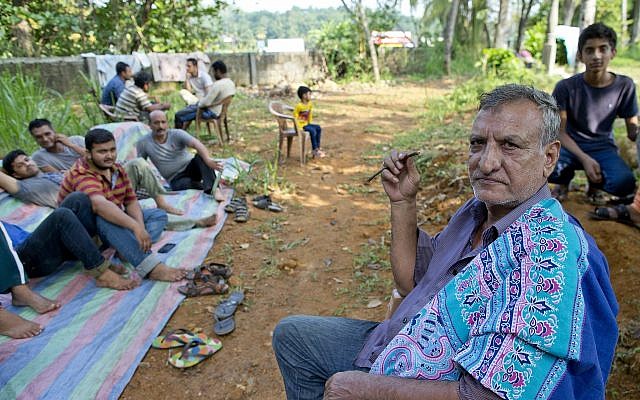 Ahmadi Muslim refugees at a community center where they took refuge in Pasyala, northeast of Colombo, Sri Lanka, on April 25, 2019. (AP/Gemunu Amarasinghe)

PASYALA, Sri Lanka (AP) — After fleeing their homes in Pakistan over militant attacks and government persecution, hundreds of Ahmadi Muslims felt they finally found peace in Sri Lanka as they sought resettlement across the world.

Then came the Easter bombings that killed about 250 people, many Christians praying at church, and suddenly they were targets again.

They say Sri Lankans suspicious of their beards, their little-known faith and nationalities shouted at some, throwing stones and hitting them with sticks. Others saw their homes attacked.Get The Times of Israel’s Daily Edition by email and never miss our top storiesFREE SIGN UP

Now nearly 200 huddle inside their mosque in Negombo and more than 500 sought shelter in the small town of Pasyala, 30 kilometers (20 miles) away — just one sign of the fear pervading the Muslim community across this multiethnic island off the southern tip of India.

Activists say some Muslim youths have disappeared, perhaps arrested by tight-lipped security forces, while others stay at home, fearful the bombings will spark retaliation from either the government or angry mobs in a nation where interreligious violence can strike.

“The people in Pakistan attacked us and say we’re not Muslims,” said Tariq Ahmed, a 58-year-old Ahmadi who fled his home. “Then in Sri Lanka, people attack us because they say we are Muslims.” 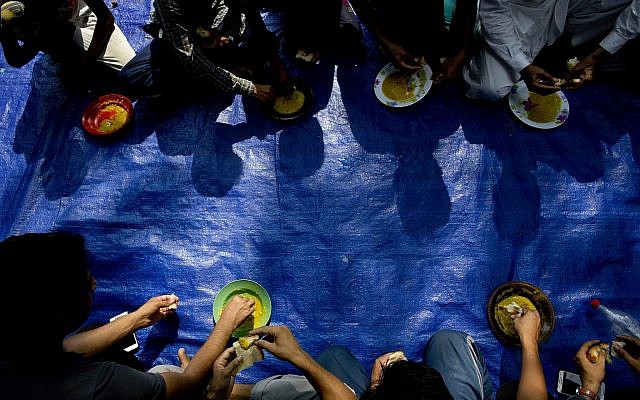 Ahmadi Muslim refugees eat a meal at a community center where they took refuge in Pasyala, northeast of Colombo, Sri Lanka, on April 25, 2019. (AP/Gemunu Amarasinghe)

But by Tuesday, the Islamic State group had asserted it carried out the assault, bolstering its claim by publishing images of Zahran and others pledging loyalty to IS leader Abu Bakr al-Baghdadi.

The Ahmadi Muslims say the harassment only grew more amplified in the days after the attack, fueled by a mistaken sense that since they came from Pakistan, they too must be like the extremists.

But the Ahmadi themselves have fled decades of persecution in Pakistan. Ahmadis believe another Islamic prophet, Ahmad, appeared in the 19th century, a view at odds with the fundamental Islamic principle that Muhammad was the final messenger sent by God.

Pakistan changed its constitution in 1974 to declare Ahmadis non-Muslims. Ten years later, the government declared it a criminal offense for Ahmadis to “pose as Muslims.” They are forbidden from calling their places of worship mosques and cannot sound the call to prayer. Like other religious minorities, they can face blasphemy laws that carry the death penalty, sometimes used by neighbors in petty disputes to target them. 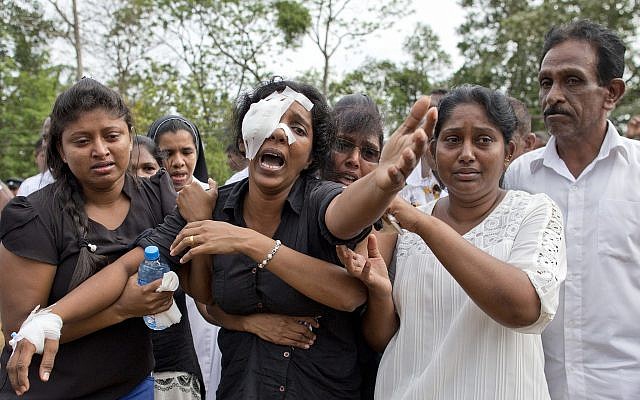 Tension grew quickly in Negombo after Sunday’s bombing, which left dozens dead at St. Sebastian’s Church. Ahmadi Muslims who spoke to The Associated Press described being pulled out of tuk-tuks, hit with sticks or pelted with stones. Others said mobs sometimes broke into homes, while others said their Christian landlords, the police or soldiers helped bring them to safety.

Now, police and soldiers protect the Ahmadi mosque in Negombo, while police man an under-construction Ahmadi community center in Pasyala, where some 500 other Ahmadis had been bused.

Prime Minister Ranil Wickremesinghe acknowledged the attacks the Ahmadis faced during an interview Thursday night with the AP and said authorities would work to ensure their safety.

Some in Negombo “had become suspicious of foreigners, not of Muslims per se,” he said. “In the heat of the moment, a few have been attacked.”

Nearly all the Ahmadis came to Sri Lanka with hopes of being resettled elsewhere in the world by UNHCR.

Babar Baloch, a UNHCR spokesman, told the AP the agency had received word from refugees that they “have been the targets of threats and intimidation,” and that efforts continued to make sure they were safe. Some 1,600 refugees and asylum seekers are registered with UNHCR in Sri Lanka, he said. 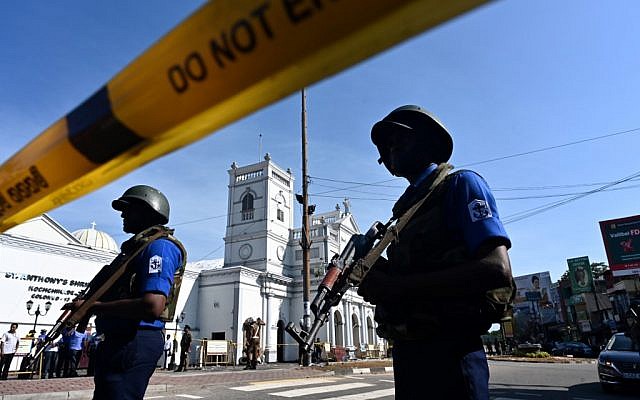 Security personnel stand guard outside St. Anthony’s Shrine in Colombo on April 22, 2019, a day after the church was hit in a series of bomb blasts targeting churches and luxury hotels in Sri Lanka. (AFP/Jewel Samad)

“UNHCR is working closely with local and national authorities who have been very supportive and helpful to ensure the security and safety of all refugees and asylum-seekers during this time of heightened anxiety and concern,” Baloch said.

The concern extends beyond just the Ahmadi, however. There has been religious violence previously between faiths in Sri Lanka.

So far, police have conducted raids and made arrest, but have been careful not to identify suspects or areas perhaps out of the fear of stoking more anger. But even as mosques hang banners supporting the government and denouncing the attack, activists say some Muslim youth have been disappeared, likely detained by authorities.

Alaina Teplitz, the US ambassador to Sri Lanka, said she had heard of similar reports.

“I think those concerns are legitimate in the sense of wanting to make sure there is no overreach given past history,” Teplitz said, referring to the abuses of Sri Lanka’s 26-year civil war against Tamil Tiger rebels. 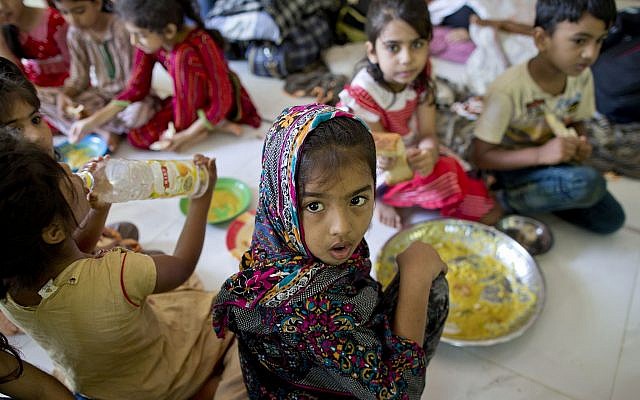 Children of Ahmadi Muslim refugees eat a meal at a community center where they took refuge in Pasyala, northeast of Colombo, Sri Lanka, on April 25, 2019. (AP/Gemunu Amarasinghe)

The situation remains tense in Pasyala, with hundreds of men catching what sleep they can outside on the patchy grass near the community center. Women and children live inside. At breakfast Thursday, the community prepared a lentil soup for those displaced. Men sat cross-legged on a long blue tarp, sopping up the soup with hunks of bread shared from a metal cauldron.

Tariq Ahmed returned to a journalist with his mobile phone. On the line was his worried sister, Bushra Bedum, who lives in Virginia.

“I am very happy before, because I thought he was he was safe there, but now I am frightened,” she said. “What can I do?”