Joko Widodo looks likely to have secured a comfortable win over his rival in Indonesian elections, according to unofficial “quick counts”.

“We have seen everything from the exit poll and quick count indications, but we must be patient and wait for calculations from the KPU officially,” the president said on Wednesday, referring the national elections commission.

“Let us reunite as brothers and sisters of the country after this election, establish our harmony and brotherhood.”

The official results of the election – a mammoth logistical undertaking in a nation stretched across thousands of islands – are not expected for another month but the unofficial quick counts, based on samples of votes, have proved to be reliable early indicators in the past.

A quick count from the survey institute Litbang Kompas, based on a sample of almost 75% of votes, placed the president, better known by his nickname “Jokowi”, and his running mate, the Islamic cleric Ma’ruf Amin, on 54.19%, and Prabowo and the former investment manager Sandiaga Uno on 45.81%.

A poll by the Jakarta thinktank the Center for Strategic and International Studies (CSIS), based on a sample of 86% of the vote, echoed these findings, showing Jokowi and Ma’ruf ahead with 55.75%.

The election is the first time the world’s third-largest democracy has held simultaneous presidential and parliamentary elections, and despite some hiccups the process appeared to run smoothly in most areas.

A festive and celebratory atmosphere dominated polling stations across Jakarta, with voters proudly showing off purple-stained fingers, dipped in indelible ink after voting.

Polling booths across the capital were decorated in red and white cloth, the colours of the Indonesian flag, as well as flowers and balloons, while some stations adopted fancy dress attire, with people dressing as superheroes and zombies.

Ayu Dyah Widarti, a volunteer for Jokowi, spent her morning cycling around various polling stations in south Jakarta to check on the voting process. “People are enthusiastic, smiling, and it’s been smooth,” she said.

Ayu said she strongly supported the president because he “has a vision, is sincere and works hard”. 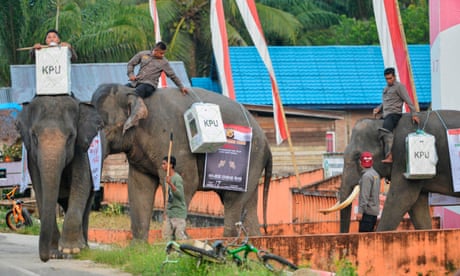 On horseback and in canoes: ballot boxes dispatched as Indonesia votes – in pictures

“He has high integrity and is honest and he doesn’t have a problematic background, or any baggage,” she said, “There is already evidence of his leadership, from when he was Solo mayor, Jakarta governor and also a president. He has built a lot of infrastructure and not just for Jakarta, but all over Indonesia, for all Indonesians.”

As president, Jokowi has impressed voters with his commitment to building infrastructure and expanding social welfare, but has drawn criticism for failing to address past human rights abuses and chronic corruption, and most recently for leveraging the state apparatus, including law enforcement agencies and Islamic groups, to solidify his support base.

In the lead-up to the election some voters, disillusioned with the president and also unimpressed with the challenger, a former general accused of human rights abuses including in East Timor, had vowed to “golput”, or abstain, in protest.

Opinion on who should lead the country appeared divided in the capital on Wednesday, with many voters saying they would remain at polling stations to watch the open-air vote count and ensure it was transparent. “Should be tight, maybe 50/50,” said Bambang Sukanto, a council worker, at one polling station. “So we are going to watch and see.”

In one of the only remaining democratic bright spots in south-east Asia, the election campaign has been marked by a deluge of fake news, and in the world’s largest Muslim-majority nation, attempts by the candidates to outdo each other in displays of religiosity.

While Jokowi has for months maintained a double-digit lead, there had been a feeling on the ground that it could be a closer race than predicted. In the bitterly divisive election of 2014, he defeated Prabowo by 6 percentage points.

Despite the quick count results, the Prabowo camp is claiming its exit poll shows the former general won with 55.4%.

In recent months the opposition has also claimed the integrity of the electoral list is undermined by the existence of millions of “ghost” voters – a move some analysts believe indicates it is laying the groundwork for a legal challenge if Prabowo loses.

Speaking to reporters near his home in Bogor, West Java, after voting, he said he could not guarantee there would not be any post-election chaos, but said it would not come from his team.

Across the archipelago there were also several logistical hiccups. In some areas of West Papua ballot papers did not reach remote areas in time, with the vote in several subdistricts postponed until Thursday.

And after a video was circulated last week allegedly showing bags of ballots pre-marked for Jokowi in Kuala Lumpur, the elections commission has announced voting there will be rescheduled, while an inundated overseas polling station in Sydney will be reopened after hundreds of voters missed out.