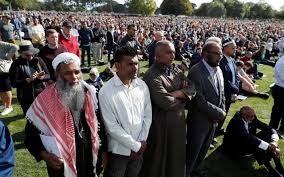 CHRISTCHURCH, New Zealand (Reuters) – Thousands stood in silence in a Christchurch park on Friday as the names of 50 people shot dead in two mosques were read out at a national memorial service, with speakers calling for the legacy of the tragedy to be a kinder, more tolerant New Zealand.

Dozens of representatives of governments from around the world joined New Zealand Prime Minister Jacinda Ardern at the remembrance service in Hagley Park, near the Al Noor mosque where more than 40 of the victims were killed by a suspected white supremacist during Friday prayers on March 15.

“Our challenge now is to make the very best of us a daily reality. Because we are not immune to the viruses of hate, of

fear, of other. We never have been,” said Ardern, whose handling of the tragedy has won global praise.