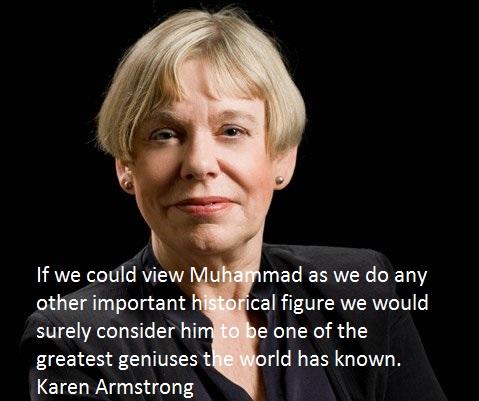 Karen Armstrong FRSL (born 14 November 1944) is a British author and commentator known for her books on comparative religion. A former Roman Catholic religious sister, she went from a conservative to a more liberal and mystical Christian faith. She attended St Anne’s College while in the convent and majored in English. She would become disillusioned and leave the convent in 1969. She first rose to prominence in 1993 with her book A History of God: The 4,000-Year Quest of Judaism, Christianity and Islam. Her work focuses on commonalities of the major religions, such as the importance of compassion and the Golden Rule.

Armstrong received the $100,000 TED Prize in February 2008. She used that occasion to call for the creation of a Charter for Compassion, which was unveiled the following year.

Karen Armstrong has been a prolific writer and almost all her works are for enlightening mankind and bringing them together. In my opinion, her Magnum opus is her biography of the Holy Prophet Muhammad, may peace be on him, Muhammad: A Biography of the Prophet.

A chapter in the book titled, Muhammad the Enemy, can bring the Christians and the Muslims together by promoting insight into some of the limitations of the past. To share one quote from the book: “If we could view Muhammad as we do any other important historical figure we would surely consider him to be one of the greatest geniuses the world has known.” For a more detailed excerpt from her book, click here.

Nobel Prize in literature for Karen Armstrong will go a long way in bringing two billion Christians and a billion and a half Muslims together, in a neighborly relationship in our global village.

Another of her very popular books is Jerusalem: One City, Three Faiths.

A Tribute to the Holy Prophet Muhammad

Building the Case for Nobel Prize for Karen Armstrong