RAMALLAH, Palestinian Territories — A Palestinian shot dead two Israeli soldiers at a bus stop in the occupied West Bank on Thursday, the Israeli forces said, sparking army raids in the city of Ramallah during which a Palestinian was killed.

In total six people were killed in the most violent 24 hours to hit the West Bank and Jerusalem in months.

The Israeli forces said a Palestinian exited his car at a bus stop near the Ofra settlement in the West Bank before opening fire on soldiers and civilians.

Two soldiers were killed and at least two other people — including another soldier — were wounded, the army said, with the attacker fleeing.

“We are searching for the terrorist. We will find him,” the military said on Twitter.

Following the attack, the army raided the nearby city of Ramallah, home to Palestinian President Mahmoud Abbas.

Entrances and exits to the city were sealed and the forces entered multiple neighbourhoods, AFP correspondents said.
Confrontations broke out in various spots and continued into Thursday evening.

A 60-year-old man was shot dead by Israeli soldiers, in what the army said was an attempted car ramming. 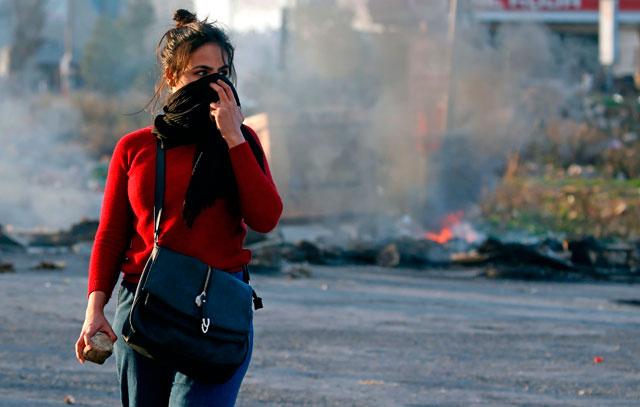 A Palestinian demonstrator covers her face during confrontations with Israeli forces in Ramallah, near the housing units of Beit El, in the occupied West Bank, on Thursday (AFP photo