OCCUPIED JERUSALEM — Israeli forces arrested the Palestinian governor of Jerusalem for the second time in as many months on Sunday after an investigation related to a land sale.

Jerusalem magistrate’s court extended his remand until Thursday at noon.

Judge Chavi Toker was presented with secret evidence and said the reason for his arrest was unlawful collaboration with Palestinian Authority (PA) security forces, which Israel says violates the Oslo accords.

On October 20, Gheith was detained for two days of questioning before being released, with Israel’s Shin Bet domestic security agency saying it was over “illegal activity by the [PA] in Jerusalem”.

He was also taken for questioning a number of times in recent weeks and his office was raided on November 4.

The PA’s Jerusalem affairs minister, Adnan Al Husseini, has also been given a three-month travel ban by Israeli authorities, according to Palestinian officials.

Israeli media have reported that authorities have been investigating the governor following the PA’s arrest of a man in October accused of being involved in selling property in East Jerusalem to a Jewish buyer.

Such sales are considered treasonous among Palestinians concerned with Israeli settlers buying property in East Jerusalem.

But among Israelis, there have been calls for authorities to free the man arrested by the PA over the sale.

Israeli newspaper Haaretz has reported that the man is a Palestinian with US citizenship. A US embassy official had not immediately responded to a request for comment on Sunday.

Fuad Hallaq, a senior adviser to the Palestine Liberation Organisation in Jerusalem, told AFP that he believed the latest arrest was part of Israeli efforts to pressure the Palestinian leadership to release the man.

The judge said in court Sunday that the arrest of the governor was connected to the land sale investigation, but that there were new allegations which she did not publicly detail.

A lawyer for Gheith said that the governor had committed no crimes, adding that “the feeling is that the police are trying to prevent the defendant from functioning in his position”.

Israel occupied East Jerusalem in the 1967 Six-Day War and later annexed it in a move never recognised by the international community.
It considers the entire city its capital, while the Palestinians see the eastern sector as the capital of their future state.

PA activities are barred from Jerusalem by Israel.

As a result, the PA has a minister for Jerusalem affairs and a Jerusalem governor located in Al Ram, just on the other side of Israel’s separation wall from Jerusalem in the occupied West Bank. 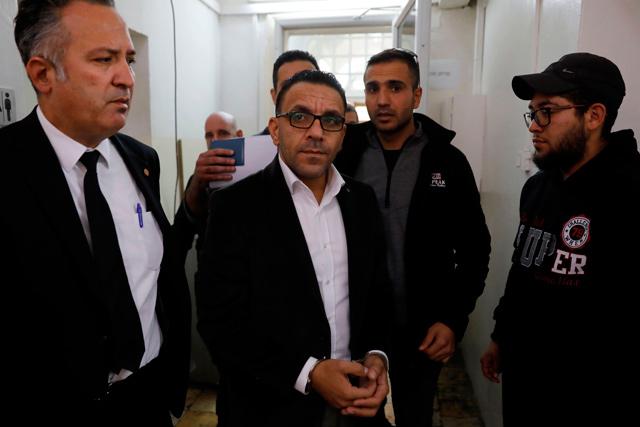 Adnan Gheith (centre), Palestinian governor of Jerusalem, is brought handcuffed to a remand hearing at the Magistrate’s Court in Jerusalem on Sunday (AFP photo)