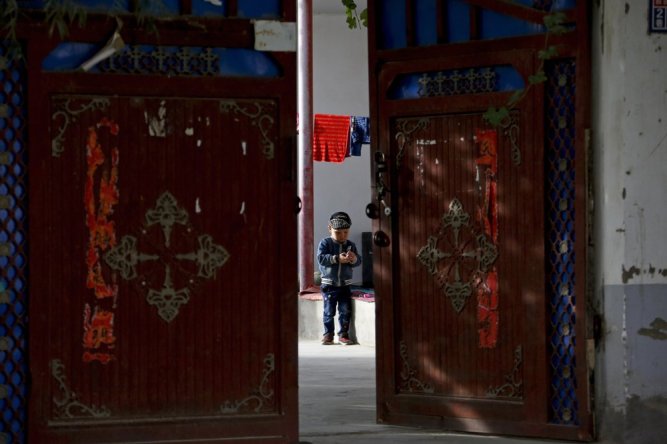 HOTAN UNITY NEW VILLAGE, China (AP) — In this corner of China’s far west, rows of identical white concrete houses with red metal roofs rise abruptly above the sand dunes of the harsh Taklamakan Desert. A Chinese flag flutters above the settlement, and a billboard at the entrance says, “Welcome to the Hotan Unity New Village.”

This is a Communist Party showcase for its efforts to tame the Xinjiang region, the heartland of China’s often restive Uighur Muslim minority and an unforgiving terrain. The free or low-cost houses are assigned alternately to Uighurs and Han Chinese, who work side-by-side in greenhouses and send their children to school together. It is the future the party envisions for Xinjiang after a massive security crackdown that has sent by some estimates more than a million Muslims to internment camps, and many of their children to orphanages.

But a closer look at what the party calls “ethnic unity” reveals what isn’t there: mosques for Muslim worshippers, or traditional Uighur brick homes, often adorned with pointed arches and carved decorations. In their place are colorful murals of what authorities consider to be scenes of unity, such as a Uighur man and his family holding a Chinese flag.