In 1994, off the coast of Salcombe Bay in Devon, divers recovered a remarkable hoard of Moroccan gold. Among the treasures they dredged up were a finger-shaped ingot, several twisted earrings and more than a hundred coins struck for Ahmad al-Mansur, a ruler in 16th-century Marrakesh. Al-Mansur, nicknamed “the golden one” after he conquered wealthy Timbuktu in 1591, corresponded with Elizabeth I over the establishment of the Barbary trading company and sent ambassadors to her court. (Shakespeare is said to have based Othello on one such ambassador.)

The sunken ship itself has long since dissolved in the briny sea so an element of mystery surrounds what it was doing patrolling southwest England: possibly it belonged to north African pirates, perhaps a Dutch trader. What’s clear, though, is that relations between Britain and the Islamic world—mediated through the criss-crossing patterns of trade and diplomacy, as well as by war and conflict—have been significant for much longer than is often assumed.

The Salcombe Bay hoard neatly symbolises what the new British Museum gallery of the Islamic world is trying to achieve. Rather than being presented as distant and aloof, the objects here have a meaningful story attached to them. The style is the same as A History of the World in 100 Objectsby Neil MacGregor, the previous head of the museum, under whose leadership the gallery was commissioned four years ago. The old John Addis gallery of Islamic art, hidden round the back like an afterthought, has been replaced with two larger rooms right at the centre of the building, linking medieval Britain and Renaissance Europe.

Putting Islamic objects at the heart of the museum, rather than at the periphery, reflects recent research into the interweaving of what were once seen as distinct “civilisations.” (Compare Kenneth Clark’s 1969 television series, where the Islamic world was seen as a hostile threat, with the 2018 update which was more interested in how cultures overlapped.) It also surely speaks to the museum’s wish to educate the non-Muslim public about a religious culture that is poorly understood, to put it mildly; as well the need to draw in Britain’s nearly three million-strong Muslim population, who will see their stories reflected in the nation’s imaginative storehouse. Ambitiously, the new gallery attempts to address both audiences—and in doing so gloriously explodes some of the most venerable clichés about both Islamic art and peoples.

The first cliché concerns what counts as an “Islamic” object. Naturally there are religious items here. As you enter, you are greeted by an austere ninth-century marble grave-panel from Egypt carved with a Quranic verse; nearby you can examine an unbound 19th-century west African Quran and its leather case. But the gallery stretches the definition of “Islamic” to encompass much more than faith. Anything made where a Muslim dynasty ruled or a substantial Muslim population lived counts as fair game. As Fahmida Suleman, one of the gallery’s lead curators, explained to me: “The whole point of the gallery, in a very open and subtle way, is to show that there isn’t one type of Islam, there isn’t one type of Muslim.”

Visitors might also raise an eyebrow at the number of ostensibly non-Muslim works in an Islamic gallery. Just three of many highlights: an 18th-century Iranian pewter flask made for an Armenian bishop engraved with Abraham sacrificing Isaac; a 20th-century Torah reading-pointer, also from Iran, encrusted with red cornelian and blue lapis lazuli tear-drops; and, most magnificently, three candlesticks made for a medieval church in Mosul, all the more poignant given the recent persecution of Christians by Islamic State in the city. Suleman said that the curators wanted to acknowledge those Christians, Jews, Hindus and Zoroastrians, “who contributed just as much to the prosperity of the region as any Muslim did.”

The gallery designers Stanton Williams were tasked with “capturing something of the spirit of Islamic architecture” said Suleman. This kind of project can easily fall into the type of pastiche the gallery scrupulously avoids elsewhere. They just about get away with it. The two rooms form an “L” shape—perhaps more accurately a lamshape, the Arabic letter that mirrors its Latin counterpart. Five walnut filigree window screens allow sunlight to illuminate the exhibits, echoing a technique common in grand mosques. The windows’ creator Ahmad Angawi, a Saudi artist, was also inspired by the Mangour screens found on old houses in his native Mecca. The closely-knitted wood allows light in, while protecting the privacy of those inside. (A very Islamic idea of the relation between public and private spaces.)

This kind of traditional aesthetic is increasingly rare in Mecca, which the Saudi authorities have spent the last few decades turning into an ugly marble Disneyland. The regime’s Wahabbi Islam sees the rich cultural diversity accumulated over the religion’s history as mere deviations from the correct path. It is exactly this human history, though, that the British Museum gallery is trying to honour and preserve.

Something else that will annoy Wahabbis is the proliferation of figurative imagery—both animals and people, including prophets and saints. Zeina Klink-Hoppe, another lead curator, told me that they weren’t setting out to make a point: they were simply led by the objects. During focus groups, she told me, some puzzled Muslims asked how their co-religionists could have portrayed humans and animals when it was forbidden in Islam. Rather than shying away from this question, the curators have, quite rightly, tackled it head-on in a dedicated side-case.

The Quran warns against idolatry, and so in mosques calligraphy praising God became the dominant aesthetic along with allusions to paradise in the form of flowers and fruits. But the Quran also says that Jesus, regarded as a prophet, once miraculously breathed life into clay birds he had moulded, a story much relied-on by Muslim figurative artists over the centuries.

To take just two of many examples, here we find a 17th-century Ottoman plate graced with a Madonna and child surrounded by dancing blue tulips and red carnations. Over in Mughal India a century earlier, a folio from an illustrated Hamzanamashows the Prophet Elijah—face uncovered, with a flaming halo—rescuing a drowning prince.

Any doubters on this front should be given pause for thought by Christiane Gruber’s The Praiseworthy One: The Prophet Muhammad in Islamic Texts and Images, to be published in January 2019, which will be brimming with devotional pictures. In fact, this would be an ideal subject for the rotating exhibition space in the second room currently dedicated to the arabesque. A bold choice, perhaps, but these images should not remain the preserve of academic specialists or be airbrushed from history.

The most fascinating—and unusual—picture in this side-case dates from 1990s Indonesia: it is a glass-painting of Semar, a wise clown figure from Javanese shadow puppet theatre, by the artist Rastika. Semar’s squat body is partly composed of Arabic letters spelling out the declaration of faith: “there is no god but God.”

The Arabic tradition of calligraphy in the shape of birds or animals is here melded with a character native to Javanese culture, showing how Islam has long been refracted through local cultures. Indonesia, which has the largest Muslim population in the world, is usually left out of the traditional story of Islamic art and this painting, as well as exhibiting a tense yet delicate beauty, is a useful corrective.

Anyone hoping to be awed by more traditional high-cultural items will not be disappointed: there are plenty of stunning works. A 13th-century brass astrolabe made by Abd al-Karim al-Asturlabi—clearly his reputation preceded him—is a gorgeously intricate mechanism dotted with birds, fish and flowers; a Turkish mosque lamp from the Dome of the Rock, a beguiling mix of blue, green and white, has the stately grandeur one would expect of something commissioned by Suleiman the Magnificent.

But you can see plenty of this sort of thing at the Metropolitan Museum of Art in New York or the Louvre in Paris. What makes the British Museum’s display distinctive is the equal weight given to everyday things used by ordinary people.

“The luxurious courtly objects tell one side of the story,” said Suleman, “but all the inhabitants [of the Muslim world] were not members of courts.” They were “craftsman, workers, farmers, weavers.”

Clothes are always interesting markers of identity. A pair of women’s silk socks in purple, magenta and rose designed to be worn inside the mosque was evidently quite a fashion statement. Diamond-shaped ties from Turkmenistan are embroidered with a hammer and sickle and the letters CCCP—ways of displaying both a fondness for Turkmen culture and loyalty to the Soviet Union.

A black-and-white felt hat dedicated to Imam Ali, an important figure in Shiism, was worn by a 20th-century dervish while carrying out religious ceremonies. Each of these objects, all made within about a century of each other, embody different pressures, allegiances and cultural nuances in geographically distinct Muslim-majority countries.

Most Islamic art galleries end in the 19th or early 20th centuries. Colonial-era collectors, who corralled most of these objects by fair means or foul, were more interested in a fabulous lost Islamic culture. One strength of this gallery is that it avoids such condescending nostalgia: contemporary Muslims haven’t stopped thinking or creating. As such it showcases modern artists’ creative responses to the traditions of the past and an often-tumultuous present.

Raed Yassin has created a blue-and-white porcelain vase made in Jingdezhen—home to many Chinese Muslims—and painted on scenes from the Lebanese civil war. The Saudi artist Manal al-Dowayan, also using porcelain, made two doves marked with the authorisation stamp women in her country until recently needed in order to travel without a male guardian. The doves symbolise a yearning for freedom, of course, but also nod to the story of Jesus and the clay birds, transforming a canonical story into one that speaks to current dilemmas.

Portable reading: a 19th-century unbound west African Quran, complete with leather satchel. Photo: British Museum
Stern critics might ask what, in fact, connects these varied objects made in the course of 1,400 years by people with multiple cultures, languages and outlooks—what makes them really “Islamic”? That is the question the curators want visitors to ask, forcing them to recalibrate their assumptions about the clean lines often drawn around words like “Islam” and “Muslims.” As Suleman said, “There’s nothing static about Islamic art: you can’t put it in a box,” just as you can’t say, “here’s what you call a Muslim or here’s what you call a person from the Middle East.” Emerging in our own fraught, fractured time, the gallery feels like a quietly radical endeavour.

For British Muslims, as well, this is welcome validation. Walking through the gallery, many will have their own moments of surprised recognition. For me, it was seeing an East African cotton kofiya, a kind of hat shaped like a risen cake and stitched with swirling patterns, of the same kind my late father, born in Zanzibar, would wear on special occasions. It was a strange feeling: part melancholy regret for a culture slipping away from me; part pleasure that a quotidian part of my childhood will now be preserved forever at the British Museum, where it belongs. 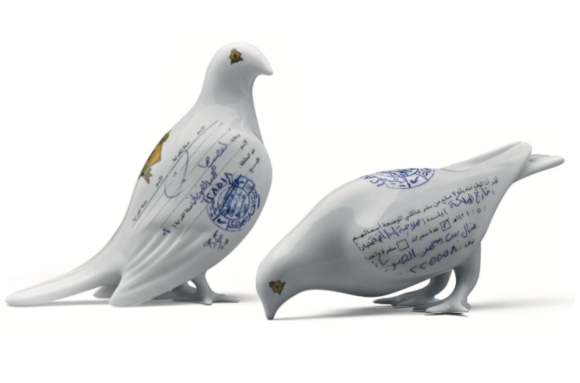 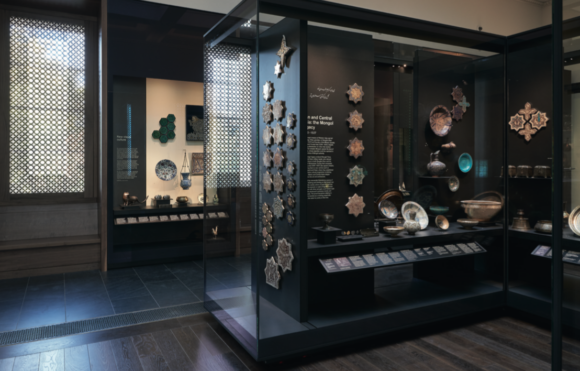