And remember the time when We assigned to Abraham the site of the House and said, ‘Associate not anything with Me, and keep My House clean for those who perform the circuits, and those who stand up and those who bow down and fall prostrate in Prayers; and proclaim unto mankind the Pilgrimage. They will come to thee on foot, and on every lean camel, coming by every distant track.’ (Al Quran 22:26-27/27-28)

Muslim pilgrims are seen moving around the Kaaba, the black cube seen at center, inside the Grand Mosque, in 2011 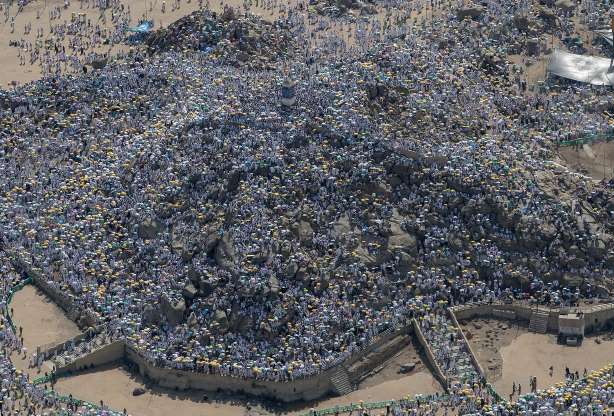 An aerial view of Mount Arafat, where thousands Muslim worshippers gather during the Hajj pilgrimage on Aug. 20

The Hajj’s massive scale, seen from the air

The Hajj, the yearly pilgrimage of observant Muslims to the holy city of Mecca in Saudi Arabia that began Aug. 19, will continue through Aug. 24. One of the largest migration events in the world—more than 2 million are expected to make the journey—its sheer size is appreciated best from above. Aerial photos show the seemingly unending parade of pilgrims and the infrastructure necessary to accommodate them, from seas of tents and buses to the massive Grand Mosque itself.