The Ottoman caliphs: Why European Islam’s current problems might reflect a 100-year-old mistake 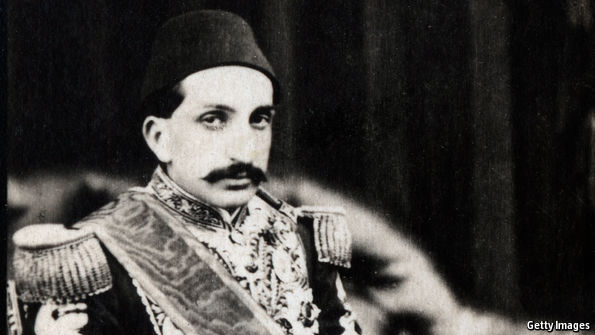 EVERY time a European city is shaken by an act of mass violence, the continent’s heavy-weight newspapers host agonised debates over what has gone wrong. In particular, debaters often ask, should European states have responded differently to the emergence of large, discontented Muslim minorities, either by accommodating cultural difference more generously or (as some advocate) by suppressing it? Even when it becomes clear that Islam was not really a factor at all (as seems to be the case with last week’s killing spree by a maladjusted young man in Munich) the discussions go on.

One of America’s leading authorities on European Islam has made a rather nuanced and unusual contribution to this conversation. Writing in the Frankfurter Allgemeine Zeitung in response to a column asserting that “terrorism has a lot to do with Islam”, Jonathan Laurence argues (link to English translation) that the present-day pathologies of European Islam are a kind of aftershock from a century-old mistake. Or rather, of a short-sighted policy that went into higher gear almost exactly 100 years ago. In the summer of 1916, the British government and its war allies began fomenting an Arab revolt against the political and above all, spiritual authority of the Ottomans. This brought about the British-led capture of Jerusalem and the collapse of Ottoman dominion over Islam’s holiest places, whether in the Levant or Arabia. As an alternative to Ottoman rule over the Arabs, the British initially backed the Hashemite dynasty which still reigns over Jordan; but the ultimate beneficiary was the royal house of Saud which took over Mecca and Medina in 1924.

In the view of Mr Laurence, a professor at Boston College, this brought to an end a period of several decades in which the caliphate (a spiritual role which the Ottomans combined, until 1922, with the worldly rank of sultan) had a generally benign effect on global Islam. Not only within the Ottoman realm but far beyond it, the caliphate formed the apex of a international network of teachers, preachers and judges. As was shown by Halil Inalcιk, an Ottoman historian who died this week aged 100, the sultan-caliphs’ real power varied a lot over time; some managed to control the ulema or religious scholars, others didn’t. But the institution’s global spiritual role was especially important in the late 19th century and early 20th century, ultimately embracing more than 100m Muslims living under British rule (in South Asia) and under Dutch rule (in modern Indonesia). As Mustafa Akyol, a Turkish writer on religion, points out, the caliph’s sway over Muslims in the Asia-Pacific region had benign consequences for the United States; Abdulhamid II (pictured), the last long-reigning sultan, helped persuade Filipino Muslims to accept American power over their archipelago. (Others have darker memories of that sovereign; Armenians hold him responsible for killing tens of thousands of their kin in 1895.)

Yet precisely because the Ottoman caliphate was so attractive to some of their subjects, European powers worked hard to undermine it. From at least 1870, British diplomacy tried to shift the centre of gravity in global Islam from the Turks to the Arabs. The Dutch tried to stop their Muslim subjects deferring to the caliph in their public prayers. With somewhat more success, the French promoted alternative centres of spiritual authority among the Muslims they ruled in Algeria and Morocco. As long as the Ottomans retained control of Libya (ie, until 1912), the caliphate kept some sway in North Africa. But when Turkey’s new secular nationalist rulers finally abolished the office of caliph in 1924, their job was made easier by the fact that European powers had been sabotaging the sacred office for decades.

As Mr Laurence sees things, the abolition of the old caliphate created a vacuum that has been filled, over the subsequent century, by much darker substitutes, up to and including the new caliphate proclaimed by Abu Bakr al-Baghdadi, the leader of Islamic State. Even where they stop short of fomenting anti-Western violence, global networks of religious fundamentalism and puritanism, such as those linking preachers from say, Pakistan and Saudi Arabia, have replaced the relatively emollient tone set by the Ottoman caliphs, who were connoisseurs of Western art and music, as a colleague has written.

Is this anything more than an intriguing detail of history? Yes, much more, in Mr Laurence’s view. It’s naive to imagine that today’s European Islam can be hermetically sealed from the countries where Islam predominates. One way or another, Muslims in Europe are going to be touched by ideas and styles that emanate from countries where their faith predominates. Today’s European governments need to have a sophisticated understanding of how that influence works, and above all to understand the risk of unintended consequences. By staunching one stream of cultural or theological influence, they may be opening the way for much worse ones.