Does the religious freedom debate make sense? Of course not, it’s the culture war

The call by social services minister, Dan Tehan, for a so-called religious discrimination act provides yet another illustration of the deep divisions within the ranks of Australian conservatism.

Tehan proposed the new legislation as he denounced “the creeping encroachment from the state on religious belief” during his Sir Thomas More lecture in Canberra last month.

Now, Thomas More certainly knew something about that, what with Henry VIII encroaching on his neck with an axe and all. 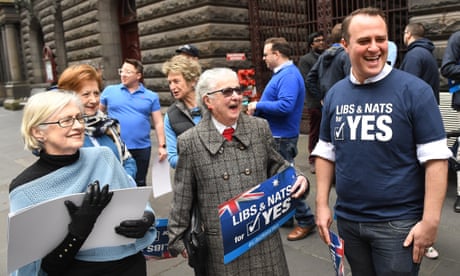 But Tehan’s not oppressed by the state. Rather, he is the state, which makes his speech distinctly odd.

Andrew Bolt helpfully glossed the Tehan plan as necessary “to save the religious many from the attacks of government and activists of the victim lobby”.

That would be the government in which Tehan’s a senior minister. So does he need protection against himself?

Tehan’s worried, you see, about “political correctness”, a force that somehow remains sufficiently powerful, and despite more than two decades of denunciation it can still “marginalise and silence the religious perspective”.

As a result, the minister complains, there’s “more disrespect directed at people who share their faith publicly and that is to the detriment of us all”.

Gosh, that sounds bad! Why, if only there were a name for a movement insisting on respectful public debate!

Among those backing Tehan’s call for an anti-PC political correctness was Senator James Paterson, the ex-IPAer who once dreamed up his own marriage equality bill primarily to protect homophobic bakers, that totally-real-and-not-at-all-made-up constituency whose wellbeing preoccupied social conservatives throughout most of last year.

When pushed to explain the necessity for a “religious discrimination bill” Paterson, perhaps wisely, said nothing about shielding the wedding industry from the awful prospect of more weddings.

Instead, he followed Tehan’s lead in claiming victimisation while denouncing the victim lobby.

“[Christians are] becoming increasingly a smaller group in our society,” he told the ABC’s Hamish MacDonald, “and as a result they feel that like the place that they once held in public debate and in public life is not as secure as it was. And you see people who espouse their views in public debate getting attacked increasingly viciously.”

Christians, Paterson seemed to be arguing, required a place in which they could feel secure and respected – a “safe space”, if you will.

Could this enthusiast for Christian identity politics be the same senator who, in the distant past of 2017, denounced legislation against religious vilification as “very dangerous”, defended the right to ridicule ideas dear to believers, and insisted that “religion shouldn’t be off limits for public criticism and debate?”

Why yes it could! But back then Paterson was responding to Muslim leaders, while today he and Tehan want to cosy up to Pentecostals and other conservative Christian churches.

If Muslims, gays or anyone much else objects to abuse or insults, they’re “special snowflakes” who need to harden up. Yet parliament must pass new laws, Paterson says, because Christians are “becoming increasingly a smaller group in our society and as a result they feel that like the place that they once held in public debate and in public life is not as secure as it was.”

Now, it’s not easy to draft legislation that protects the sensibilities of those who follow Jesus while simultaneously allowing you to shout “fuck your feelings” at the disciples of Mohammed.

Fraser Anning, the former One Nation senator who defected to Bob Katter’s Australia Party, pointed out the obvious problem.

“The real danger,” he complained, “is that laws intended to protect those who support traditional Christian values will ­inadvertently end up providing a shield to Islamic extremists and advocates of sharia law.”

Or at least they might if they were ever going to pass through parliament, which, of course, they’re not.

Tehan and company aren’t really interested in preparing legislation. Rather, they’re engaged in a minor skirmish as part of the slow-motion civil war within the conservative ranks.

When Tehan talks about the “encroaching state”, he means, fairly evidently, Malcolm Turnbull.

The hard right in the Coalition recognises the political impossibility of rolling back marriage equality, a reform that enjoys overwhelming public support. They also know that their hardcore supporters remain avowedly hostile to homosexuality.

Hence the necessity of pinning the blame for marriage reform onto Turnbull.

It’s in that sense that Tehan’s calling for protection against the government to which he belongs.

If the prime minister can be portrayed as a secular Henry VIII, social conservatives can posture as so many Thomas Mores, embracing the mantle of victimhood even as they denounce PC victim culture.

Does it make any sense? Of course not! But that’s how culture war works.