Eight on trial for rape, murder of girl in India’s Kashmir amid public anger

SRINAGAR, India (Reuters) – Eight men accused of involvement in the rape and murder of an eight-year-old Muslim girl in India’s Jammu and Kashmir state appeared in court on Monday for the first hearing in a case that sparked nationwide outrage and criticism of the ruling party. 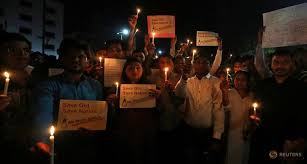 The girl, from a nomadic community that roams the forests of Kashmir, was drugged, held captive in a Hindu temple and sexually assaulted for a week before being strangled and battered to death with a stone in January, police said.

Public anger at the crime led to protests in cities across India over the past few days, with outrage fueled by support for the accused initially shown by state government ministers from Prime Minister Narendra Modi’s Bharatiya Janata Party (BJP).